Actually, this post would have been way more positive had I written it yesterday, but I have been completely starving since 3pm yesterday afternoon no matter what I eat, and it's driving me NUTS.

Also, I went to a Super Bowl party and my friend who mainly eats paleo (except, you know, when she doesn't) reminded me that I am only 6 days into this lifestyle change and probably don't know what the hell I am talking about yet.  Which is SO TRUE.

Anyway, I have an awesome and funny FB group, and I have been taking non stop pictures of my food, so let's talk Whole30.

This is my FAVE breakfast: 2 eggs and a splash of egg whites because I have a carton of them that I need to use scrambled with half a link of chicken apple sausage and a TON of spinach, a baked potato with green onions, and a couple of cuties. 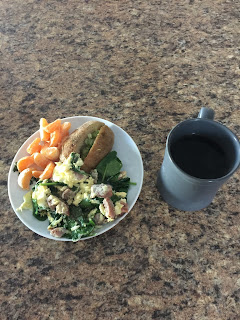 I have started packing mega lunches-- no more salads for me.  This chicken and green beans and bacon dish was PHENOMENAL and I will add it to my rotation, Whole30 or no. 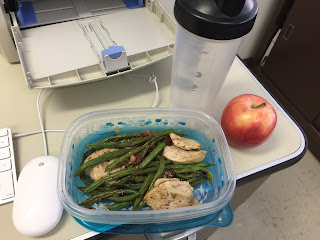 This was an amazeballs dinner when I came home cranky and not knowing what to eat: chicken breasts covered in oregano and basil and roasted diced up and mixed with celery, sliced grapes, slivered almonds, and spicy mustard.  I had it on lettuce instead of a tortilla, which would have been my go-to in another life and added sliced apples instead of cheese.  Totally delish. 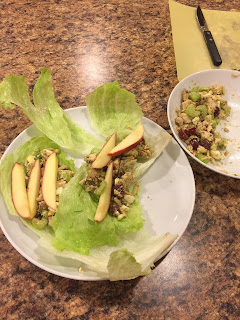 My go-to breakfast, again.  I don't mind eating the same thing over and over.  Before this diet, I ate an onion bagel with cream cheese for like a year straight. 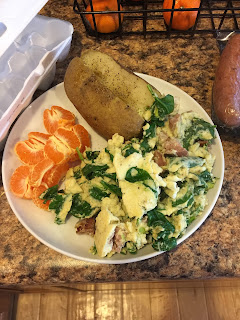 Turkey burger pan friend in lard (I always have lard on hand because you never know when you need to make the perfect pie crust except NOT FOR AWHILE), on lettuce with spicy mustanrd and peppers and salsa on the side. 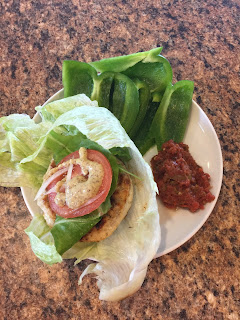 I really over did the almond butter here, but I was SO HUNGRY.  I ended up with a terrible stomach ache from all the oil, so I won't make that mistake again.  Also, I put thawed frozen raspberries on my salad and some balsamic, and the juice and the vinegar made an excellent dressing. 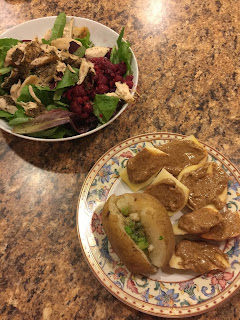 The grocery store did not give me spinach, which TOTALLY SUCKS, and instead they gave me a huge stub of spring greens, so I feel compelled to eat them at every meal. 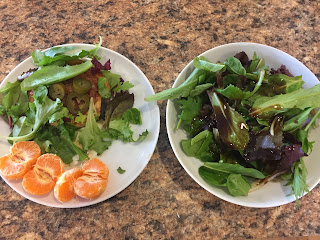 Tiny burgers with sweet potatoes for buns! SO GOOD!  I also made a whole bag of potatoes into oven fries with coconut oil and salt and pepper, and they were lovely.  They would have been better with ketchup, but I haven't had time to make any. 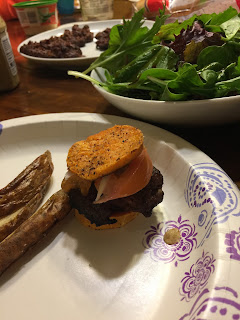 This was lovely because I got sick of eggs: a baked sweet potato with two chopped dates and 2 teaspoons of almond butter. 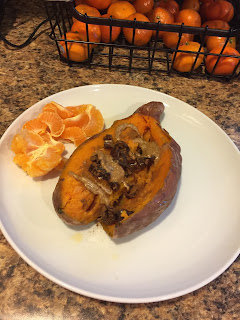 I was DYING for lunch after hockey yesterday, so I made my same old eggs thing only with kale instead of spinach (kale is a solid meh in eggs, but I bought a lot with huge plans to make chips and a kale-lemon-chicken salad) and a quarter of a cantaloupe, but I was so hungry that i ate first and photographed later. 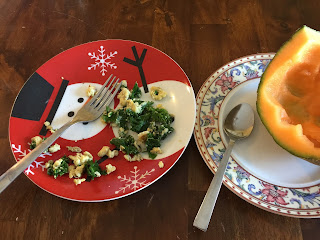 I have also been loving raw almonds for a snack, along with dates for a blood sugar boost and Larabars-- OMFG Larabars.  I am taking Harry to an anti-Islamaphobia panel tonight, and while it will be easy to grab dinner for him, I plan to eat a big snack (maybe a turkey burger) before we go and pack a cute, some almonds, and a Larabar to eat on the go-- serious lifesavers.

I haven't been tempted to eat off plan, but I was not strong enough (LOLz but really) to make brownies for a Super Bowl party.  I did make this dip, and it was lovely.  I made my own buffalo sauce with lard, Frank's hot sauce, and a dash of vinegar, by the way.

I made a "hummus" dip with cauliflower instead of garbanzo beans. All other ingredients the same. You can just google "whole 30 compliant hummus" and find it. It is a lighter texture than traditional hummus, but otherwise just as good. Roasted cauliflower also makes a "cous cous" - you roast the cauliflower and then put it in a Cuisinart and grind it up until it looks like cous cous. I then sautéed it with zucchini, carrots, and some chicken broth (I had a cauliflower risotto recipe). It looked so much like cous cous, I kept thinking, "I should really serve some vegetables with this."

Have you checked out the Well Fed cookbooks/blog? She is amazing. We love her chocolate chili and sunshine sauce, and her recipes are simple and easy to follow. I think her potato salad is just on the blog, but check it out. It is *so* good.

I also really like NomNomPaleo -- her iPad app is amazing and so is her cookbook.

If you want to involve the kids in choosing and cooking recipes, we also love the Eat Like a Dinosaur book. (The bacon hamburgers are truly amazing.)