In my ongoing attempts to prove that despite all of these children and all of these jobs, we TOTALLY have our lives together, I decided that there is no way we are going to feel the pinch of buying a bajillion Chrismukkah gifts  in the same month this year.  But!  We still want to buy a bajillion Chrismukkah gift because Christmas morning chaos is one of my favorite things about having a million children children.  Well, that and how often we get to celebrate a birthday.  Chocolate cake almost half the year! (Almost half because Dorothy and Ben share the same birthday birthday month). 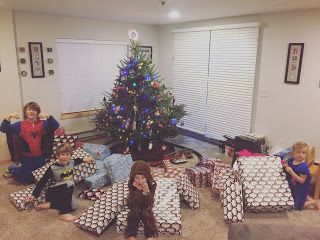 This year, we are going to do the impossible thing that we have never ever managed to do-- we are going to stop hemorrhaging money between late November and late December, and instead, we are going to buy at least 2-- but hopefully more like 4-- gifts EVERY MONTH and squirrel them away until Christmas.

I know it's only February, but so far WE ARE DOING IT!  Last month, we bought 3 gifts for Dorothy and 2 for Cooper, and it felt AMAZING.  It felt so good, in fact, that I want to help you jump start your holiday shopping, too.  I suggest hitting up Diapers.com for Christmas toys, and to make that happen, I am offering a $50 gift certificate to Diapers.com.  To win, all you have to do is comment on this post, and tell me your favorite Chrismukkah purchase from 2017.  This awesome giveaway is made possible by a partnership between this blog and Nakturnal.

In Chrismukkahs past, I have made the mistake of buying Dorothy toys that she's just not ready for. 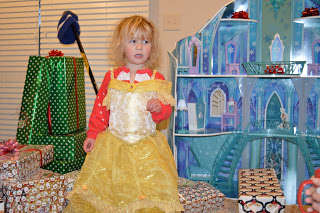 Exhibit B: (I mean, that particular doll was pretty good, but the American Girl behind her?  Not so much) 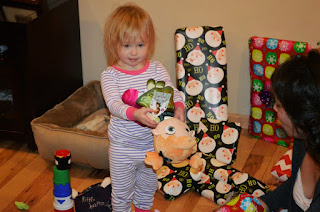 And the quintessential exhibit C: 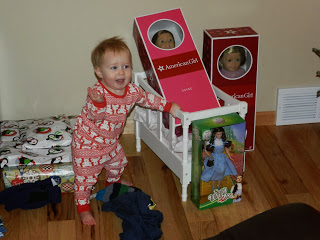 This year though, I am reading real suggestions for developmentally appropriate toys and making a Pinterest board, even.  And!  I am not the only person on the internet who says early shopping is the thing to do!  But-- I might be the only person you know offering a giveaway to get you started, so don't forget to comment on your favorite Chrismukkah purchase from last year to be entered to win a $50 Diapers.com gift certificate.

In the interest of total honesty, I have to tell you that I am probably giving Dorothy the stuff I have already bought-- the Pinkalicious books, the Shimmer and Shine playset, and the giant pack of Disney Princess dolls-- for her birthday because another thing I want to do this year is curb the birthday spending.  I just invited all her little preschool friends over for a Trolls-themed tea party (IT'S GOING TO BE SO AWESOME), and I already have all her gifts, so I feel like this is a huge win in that column. Plus, I still have 2 gifts for Cooper that I bought in January, so I'm not ruining my Chrsimukkah resolution, either.  It's hard when you are shopping in advance for little kids to know what the heck they are going to be into when the holiday rolls around, and she loves all of those things RIGHT NOW, so I have kairos on my side.

Which reminds me!  The time is right for you to start your holiday shopping, too, with $50 from Diapers.com.  All you have to do to enter is to comment about your favorite Chrismukkah purchase from 2016.  I can't wait to read your answers, and tell your friends to enter, too!
Posted by Sarah at 7:06 AM

I shop year round and it is awesome! The only problem is last year I ended up with twice as many gifts for one kid than the other so I had to scramble at the last minute to even things up. ;) My favorite gift from last year was my daughter's dollhouse--it's pretty much a present for me too.

Sarah, my favorite gift to the kids last year was a gift card to Petco in a tiny stocking that I had gotten for each of them and wrapped in a huge box. They were so excited to see what was in the big box labeled for both of them to open together. When they opened it up and saw that there were two tiny stockings in it, they had this look of WTF on their faces. Then they saw the gift cards. It finally dawned on them that we were getting them the kittens they had been begging us for. Johnathan started to giggle hysterically. Sophia started to sob/laugh. I truly have watched the video at least five thousand times and it still makes me smile. They had to wait until January 11 to get the kittens from the shelter, and trust me, those few weeks were torture as we spent hours going to different pet stores as they tried to find the perfect cat beds and cat toys. Now we have two new little members to our family and I've watched as my kids have take On the responsibility for a pet that is theirs and theirs alone. Best Chrismukkah gift ever.

Hi! I think one of my favorite gifts was zoob builders. They have kept my son busy for hours! And my daughter and I love them too! They are different than any other blocks or builders and it sparks so much creativity! I totally recommend them!!

My favorite gift was a minions bedding set I got at Ross for my 66 year-old mother-she loved it. Good luck with your plan!

My girls finally got their American Girls this year and it's as awesome as I'd hoped!

Our biggest hit last Christmas was a last-minute purchase of doll bunk beds that I happened upon at a thrift store and Magna Tiles are the gift that keeps on giving--the kids will spend so much time playing with them!

My cousin is 5 and loves books! She got a boxed set of Disney books and was so excited =)

This is such a good idea -- but how do you prevent yourself from breaking out gifts "just because" (like "just because we're rained in again and you are destroying the house and maybe if you had a new toy you'd sit still for a few minutes)?

Anyway, my favorite gift I bought this year was a collection of food-related things from Ikea: soft stuffed vegetables, fruits, and other foods (sausages, cheese, a whole fish--very Swedish!) plus a set of mini utensils for my daughter. She got a play kitchen from her grandparents for Christmas, and she spends lots of time making "soup" and pretending to slurp from the tiny ladle.

We loved our marble run. Fun for kids and adults!!

MY favorite purchase was a gift I purchased for my son to give to his big sister. It was a Kidzoom camera. She uses it most every day, unlike the damn educational desk and Hot Dots I really wanted her to like! lol

My favorite gift I purchased was.....um....I don't remember. It was all a giant blur because Matt was deployed and I was in denial that Christmas was occurring without him.

My fave gift purchased for the kids was the MagnaTiles set. Our third set to add to their collection. magformers, MagnaTiles and Picasso tiles have been played with DAILY for over three years now at our house and by all ages. I have no guilt buying more! That says a lot from me!

Hmmm, this is tricky! Our favorite I would have to say, weirdly enough, is the small toys that we bring to our local VFW a few weeks before Christmas for their Santa program. See, in our town, you bring a small wrapped gift there and leave with little bright orange ribbons to tie on your day. On Christmas Eve one of several VFW members dressed as "Santa Man" (that's what my middle son calls him) comes to your house for an early visit and gives the gifts to your kiddos and candy canes. It's been a long standing program, I'm 31 and they came when I was 1! It's a wonderful tradition that I enjoy carrying on with my kids. The tricky part is explaining why Santa showed up in a Ford Escape....

My favorite thing we got for C was a few Imaginext Batman & Superman vehicles. He has loved them so much and it was really fun to see him play with them nonstop for a few days over Christmas. <3

I have a 2-year-old son who is all about trucks. His best gift was a Bruder Crane truck that my daughter loves as well.

My facriteria gift is new books for the kids!

Is it too late to enter?? I got the most amazing wool socks -- thin for use in shoes, but cute with patterns and colors. I'm apparently easy to please (and ordering more as we speak)...

My super sparkly necklace James picked out at J. Crew. WAY blingier than my average costume jewelry and super fun. The best things the kids got was probably Cora's holiday barbie purely for the look of joy on her face and the look of pure jealousy on the face of her big sister behind her.

Instead, my favorite purchase was an old-fashioned wooden dollhouse, complete with wooden dolls with yarn hair, and tiny little coffee mugs and vases of flowers. It reminds me of the dollhouse and furnishings my grandpa hand-made for me when I was little. :)

My favorite purchase for the kids was headphones they can use for their new Kindles! Even though their screen time is pretty limited, I don't have to listen to the games' theme songs when they are allowed to play!

Sarah said...
This comment has been removed by the author.
6:25 AM

The winner is #12 Teresa! Email me at harrytimesjackedup@gmail.com for gift certificate details!!