Maybe it's the coffee and the quiet talking, but I just love love.

Is it wrong that my favorite moment of the day might be right now when the rest of my family is asleep?  I have had my workout, and I am drinking my first cup of coffee, and I have almost an hour of time to cross things off my to-do list before everyone is awake and needs me to do all of the things.

This is another Wednesday of all of the things, only instead of the hockey/gymnastics shuffle, I have to take everyone to Harry and Jack's school because Jack is on a student panel that he's really excited about.  Gah.

The Whole30 is going better than I thought it would.  I mean, right this second I am starving, but we had an amazing V-Day dinner last night: (Also that's sparkling water with frozen raspberries, not wine.  For me.  Ben had wine.  My FAVORITE wine, actually). 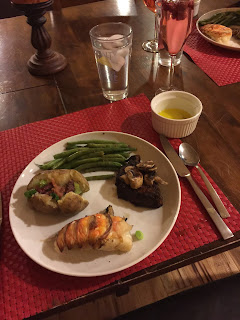 And there's nothing stopping me from eating a huge breakfast right now except my own laziness because this couch is comfy and the dog next to me is really warm.

I've been a little stressed about next year because we decided not to send Dorothy to full-day 4K, even though that's what we were leaning toward because it would be so nice to have more work time.  Instead, we decided to send her to afternoon 4K, which is less work time, but more mornings like this, so, it's a win, I guess. 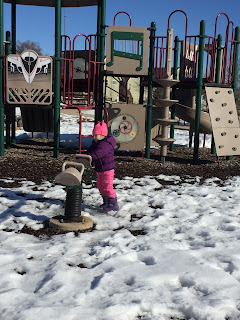 Oh, Cooper.  He's really ricking that awesome pedicure.  he has also ripped all the knees out of his sweat pants right about at the exact moment that all the store have swept sweatpants off their shelves, so that's awesome. 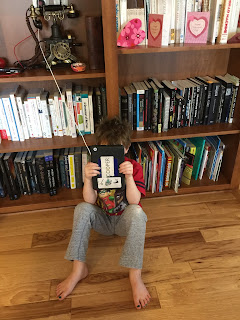 I took the boys to see Lego Batman with friends yesterday night, and Ben took Dorothy to Build A Bear, where she has been DYING to build a Poppy doll from Trolls.  She got the Trolls DVD for V-day, and it was pretty much the best ever.  And yes, she is wearing my pink hat from the Women's March.  She calls it her kitty cat hat and tells everyone it's her mom's but I let her wear it. 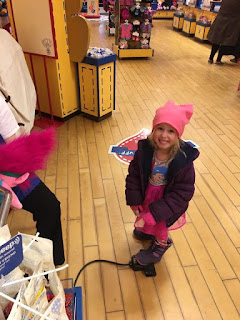 Also!  You can still enter to win a $50 diapers.com gift certificate from Nakturnal.
Posted by Sarah at 6:17 AM