60 and sunny in Wisconsin in February. Yikes.

We are enjoying end times weather this weekend-- 60 and sunny and all of the snow in the neighborhood is gone except in our back yard which only sees sun for like 5 minutes a day, and not even 5 full minutes because the trees are usually in the way.

The kids played outside all day and got filthy, especially Jack who was so dirty that he stayed outside from noon to 5:30 and came in for a quick shower before he ate amazing amount of dinner and collapsed in bed.

He and Cooper  event went to the school park and ran into Jack's friend (whose dad was at the park with him because most parents are not terrible like us), and they were all in shorts and flip flops and had a surreal snowball fight with dirty playground snow.

I got to say things like "close the door" and "stop running in an out" and "throw away your popsicle wrapper," and these are all spring things to say.  It's supposed to snow next week #theplanetisdying. 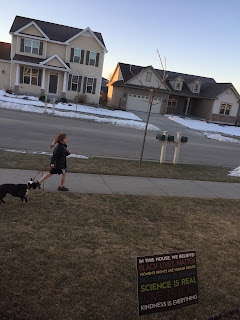 On Friday afternoon, Cooper went to coach speech with Ben, and I was SO TIRED.  I tried really hard to get Dorothy to snuggle on the couch with me and watch the Trolls movie, but, alas.  The 55-degree afternoon beckoned her. 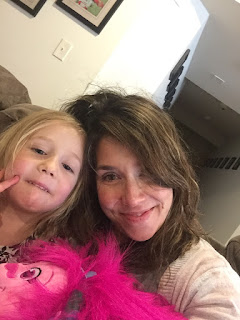 So we loaded up Caroline and went to the park 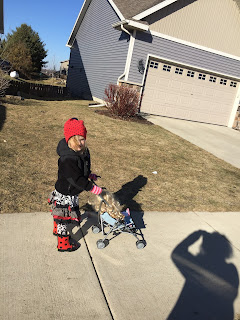 She chatted the whole way. 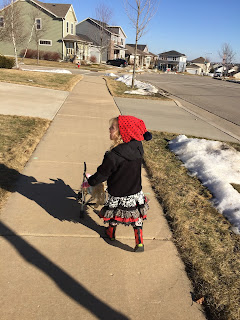 Ben and Cooper and Jack had the Cub Scout Blue and Gold banquet (Cooper canNOT WAIT until he's a Scout), so Harry and Dorothy enjoyed Dairy Queen OUTSIDE at NIGHT in FEBRUARY.  SO WEIRD. 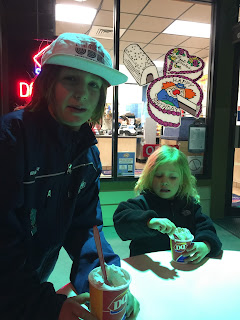 Something else weird:  I was not even tempted a teeny bit to have a bite of their ice cream.  WHO AM I?  Also, I have been weighing myself even though the Whole30 says NOT to weight myself during the 30 days, but I am clearly a bit disordered about my body or I wouldn't be doing this in the first place, and my weight loss has stalled at 7 pounds, around the same time I have discovered the magic of berries with coconut flakes and almond butter.  Go fig.  But!  I really want to lose 12 pounds because that is my immediate weight loss need.  The rest can be slow.  But 12 pounds will get me to where I was when I first got a Fitbit (eff you, Fitbit!  I shake my fist at you!) and thought I was fat to begin with.  And!  Another weird thing:  Last night I made cookies and did not eat one speck of dough or have a single bite (and they were flat and terrible for the first time in 2017, which is a sign that if I want to make good cookies, I need to EAT THE DOUGH). I WAS tempted to eat it, especially when the cookies came out flat and I decided not to make the last dozen or so in the mixing bowl.  I had to immediately fill it up with soap and water to keep my fat fingers out of there).

Jack read his entire library book lying on the front porch amid snack refuse.  Pretty much my perfect day. 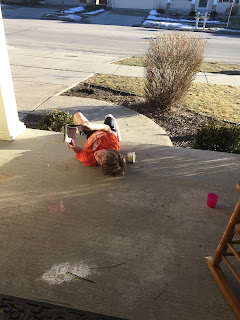 Congrats to lucky commenter #12 Teresa!  You win Nakturnal's $50 Diapers.com gift certificate!  Email me at harrytimesjackedup@gmail.com for the deets! 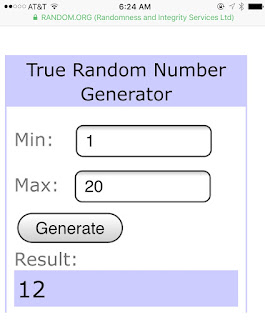 I emailed you :) I never win! So excited!