As you can see from the above video, Cooper is super into basketball right now.  But!  If you think that's cute, wait until you see him dribble:


And then of course, there's this, his dish-washing face 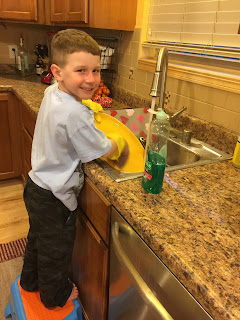 Meanwhile, Dorothy was SUPER SUPER CRABBY as she roller skated and had to go onside like 3 times because she wouldn't stop screaming. 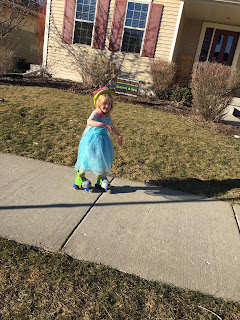 We didn't think much of it-- even though she was super pale all day-- look at how ghostly she was in this pic of her and Ben voting (also wearing a baby headband, which is awesome) 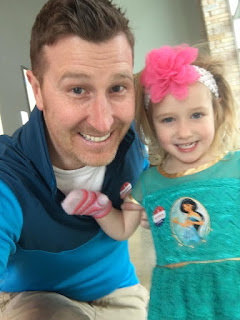 And then right at 5:00 when the doctor's office was closing, she started sobbing and saying her ear hurt.  This was not a surprise to me because she has been complaining of ear pain for like 3 days off and on, but she never seemed very upset about it and she had NO OTHER SYMPTOMS.  I mean, not even a little cough or a runny nose.  We got the earliest appointment at urgent care (7:00, her bedtime) and saw a completely lovely doctor who we had been thinking would be our primary ped when ours retires until the governor totally screwed us and cancelled our health insurance and we have to switch everything next year anyway unless something magical happens in the meantime.  Anyway, she has an ear infection, and I will take her pain claims seriously going forward.  Probably.

But!  To  make this totally about me, in an effort to keep her from falling asleep in the car, I stopped at the best donut shop in the world, one I have been literally DREAMING about on the Whole30 and got a dozen donuts for the fam.  Dorothy ate one and Ben ate 3 last night, and I enjoyed smelling them, but that was a bout it.  Then I had a dream that I ate one and I woke up feeling terrible about myself and was THRILLED to realize it was a dream, so I think breakfast will be NBD.

So funny, when I was on the Whole 30, twice I had very vivid dreams of eating "non-compliant" food. One time was potato chips, and I could literally feel the crunching of the chips in my dream. Both times I woke up feeling super guilty (momentarily) then relieved that I hadn't actually cheated. I am impressed that you are able to do things like buy doughnuts for your family. It's just me and my husband, and we both did the Whole 30 together, so we never brought "non-compliant" food into the house during that time. I too share your dislike for the term "Sciencey." Ugh!