Cooper came into our room at 11 last night complaining of ear pain.  We gave him some Tylenol and he slept with Ben (SEPARATE BEDS ARE THE BEST EVER), and the worst part of the whole night was that we had to turn off Gross Pointe Blank (BEST MOVIE EVER) and switch to less inappropriate network blather.

Today was my WOH day, so I was glad that Ben was the one who had to take him to the doctor because he is super constipated and has been complaining of a tummy ache for a week, so I figured we could get that looked at, too, and I wouldn't have to deal.  Also!  Dorothy has had a fever since Saturday, so we figured she could use a check, too.

But the only appointment was at 4 tonight, and Ben needed to take Harry to hockey at 5, so guess who got to leave work early and take 3 kids to the doctor?  YUP.

(Ben has to go on the ice with Harry or captain ADHD doesn't perform well. That's the biggest intervention we make for his ADHD, by the way-- Ben is a coach of all of Harry's sports teams.  It is high maintenance but SO MUCH BETTER than any sort of medication.  The other day, I had a department meeting, and Ben had to take all the kids and couldn't skate and when he left everyone eating shitty fast food and stepped into the rink to check on Harry, he saw him doing an arabesque instead of a drill and punching 3 kids in the face,  In a 30-second window.  So.  (Hockey is a sport where punching people in the face just sort of happens sometimes, so it's not as insane or aggressive as it sounds, but when he told me that on the phone, I died laughing because SERIOUSLY.)).

Anyway, I spent an hour in a tiny room with 3 kids. During cold and flu season.  IT WAS SO FUN.  Everyone was so rowdy that after the doctor swabbed Dorothy's throat, he offered to take all the kids with him to the lab to give me a break, and none of the little traitors wanted to go.  So instead, we all hung out together until I got the results on my phone app 5 minutes before the doctor came to tell me she was negative.  But Cooper!  He definitely had a raging ear infection and the doctor said maybe strep, too, given the condition of his red spotted throat, but Coop was spared a swab since the ear infection guaranteed him some drugs.  Fun times.

Then we drove all the damn way across town to the 24-hour Walgreens by our house and even though it took almost 30 minutes in rush hour traffic and even though everyone was starving and really pissed off about it, the meds were not ready for pick up upon our arrival.  OF COURSE.

Let me just say, our PTO board meeting tonight felt like a date night. 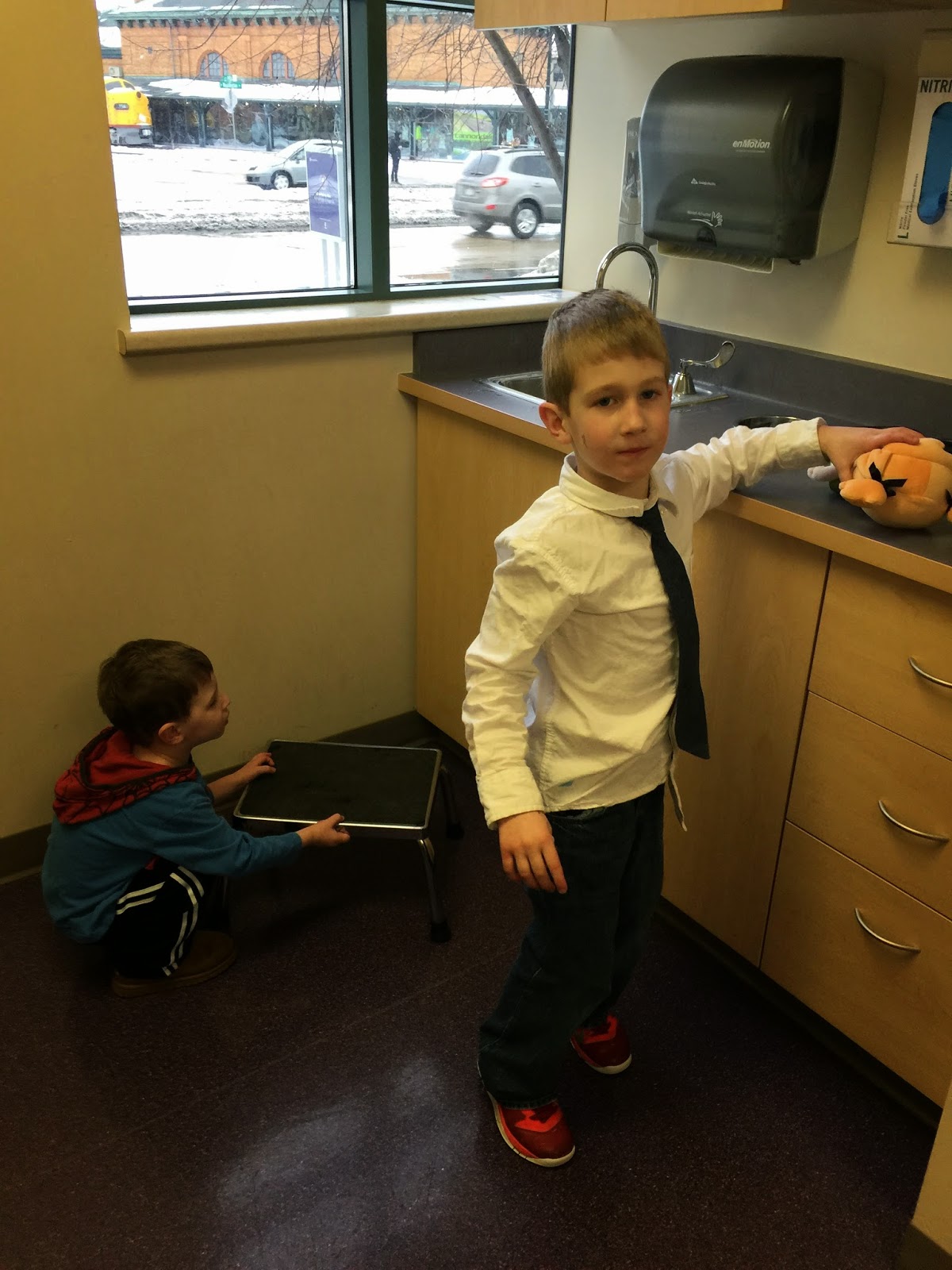 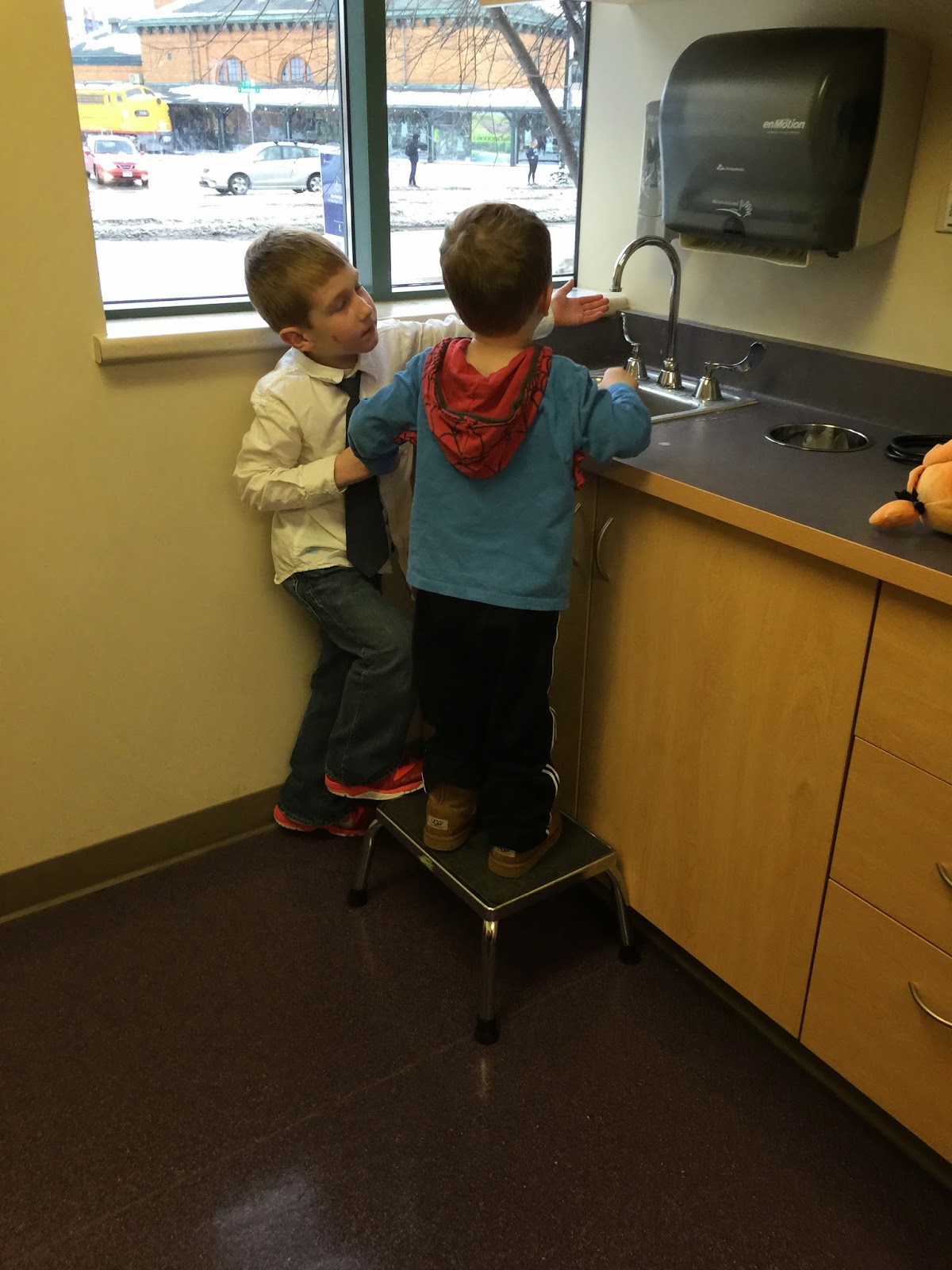 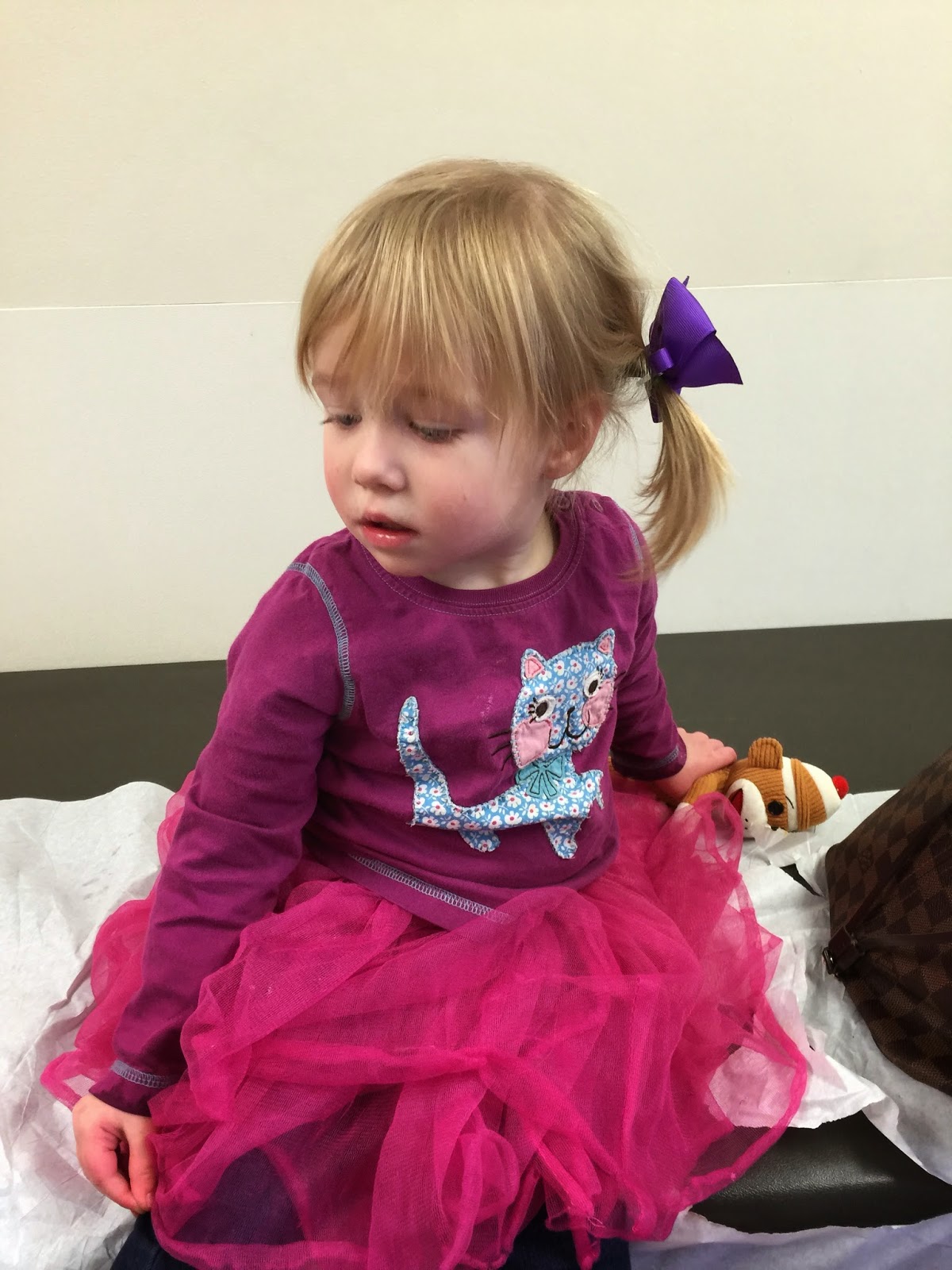 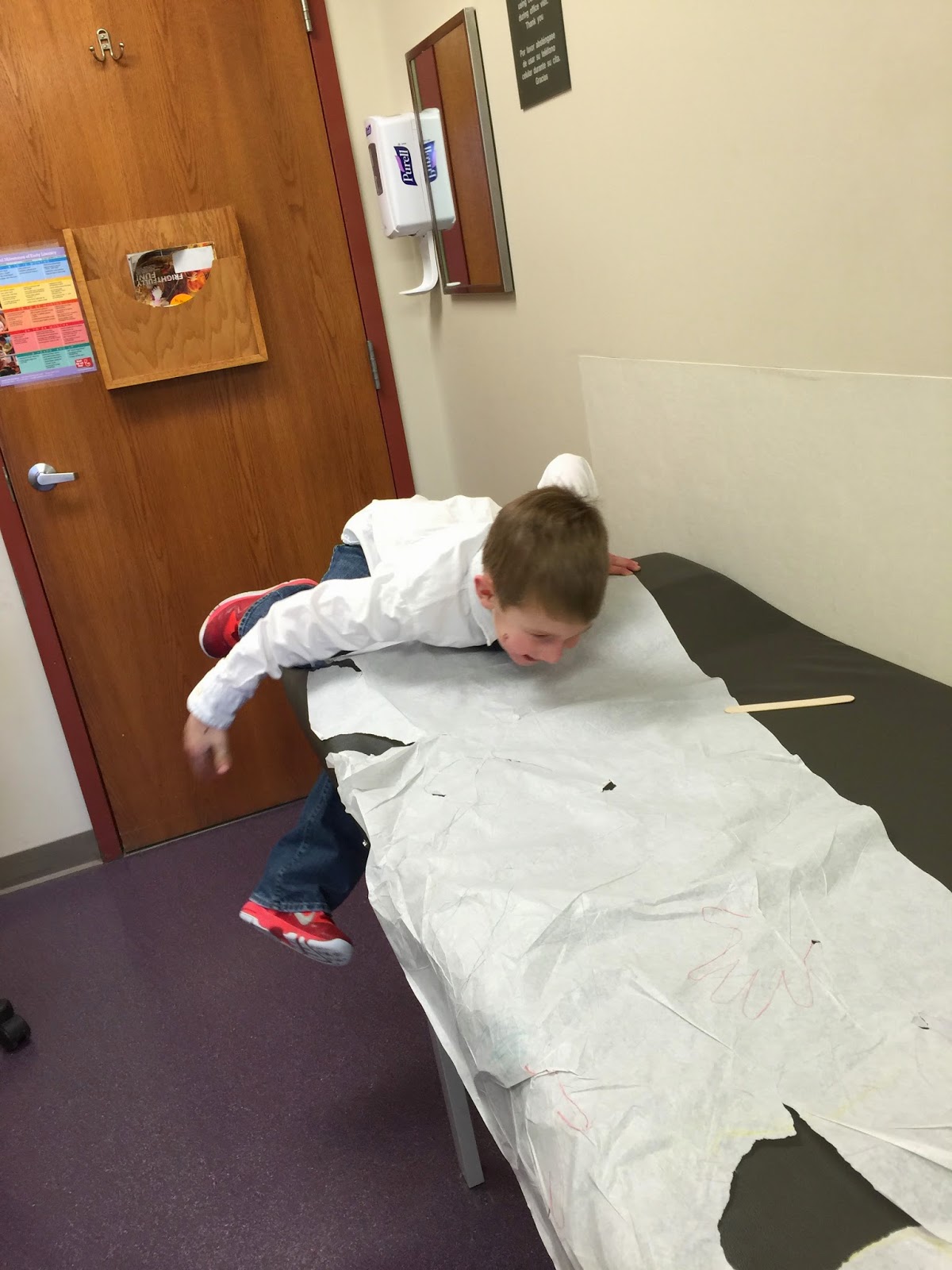 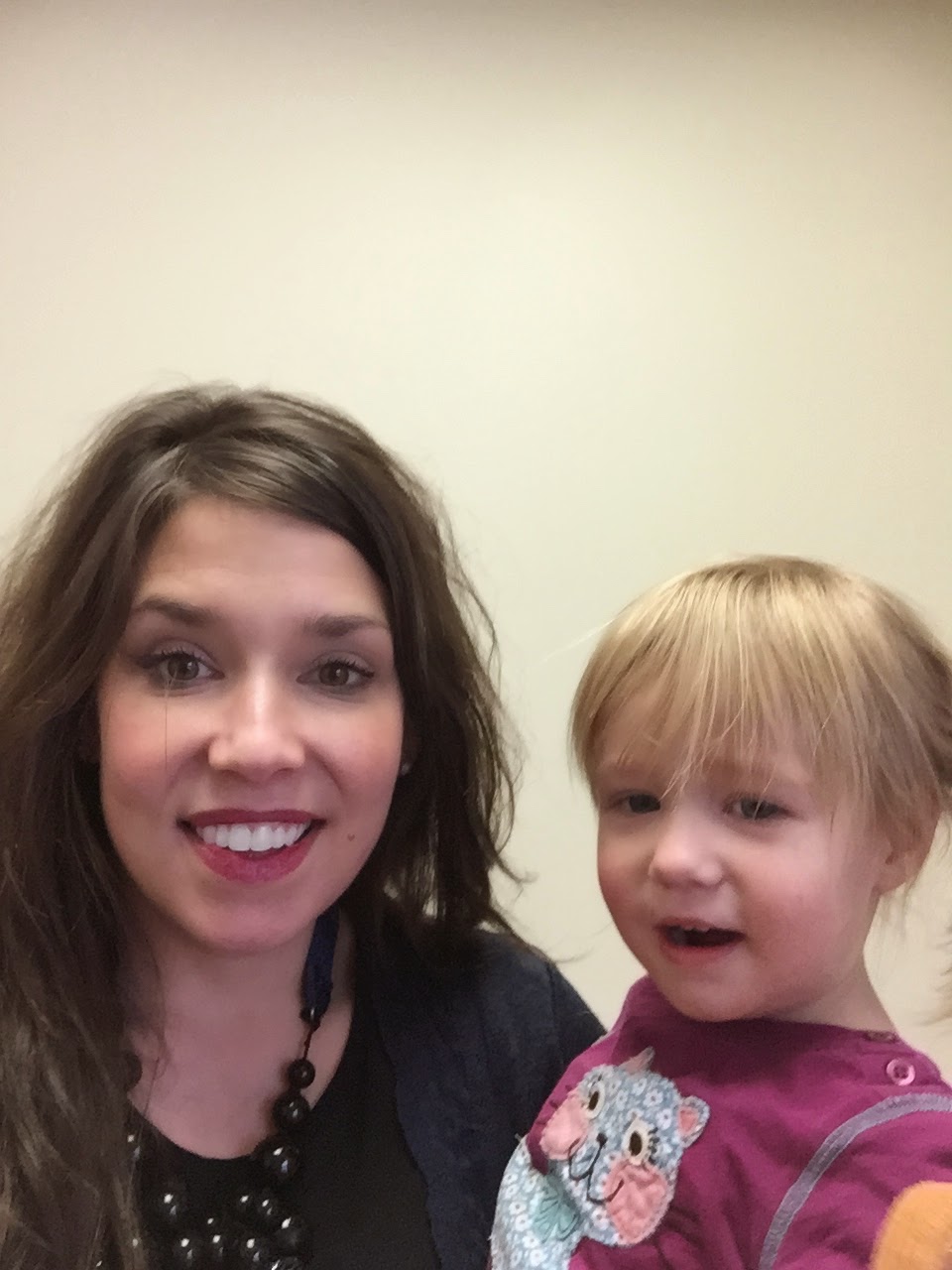 How we found Cooper when we got home from our meeting: 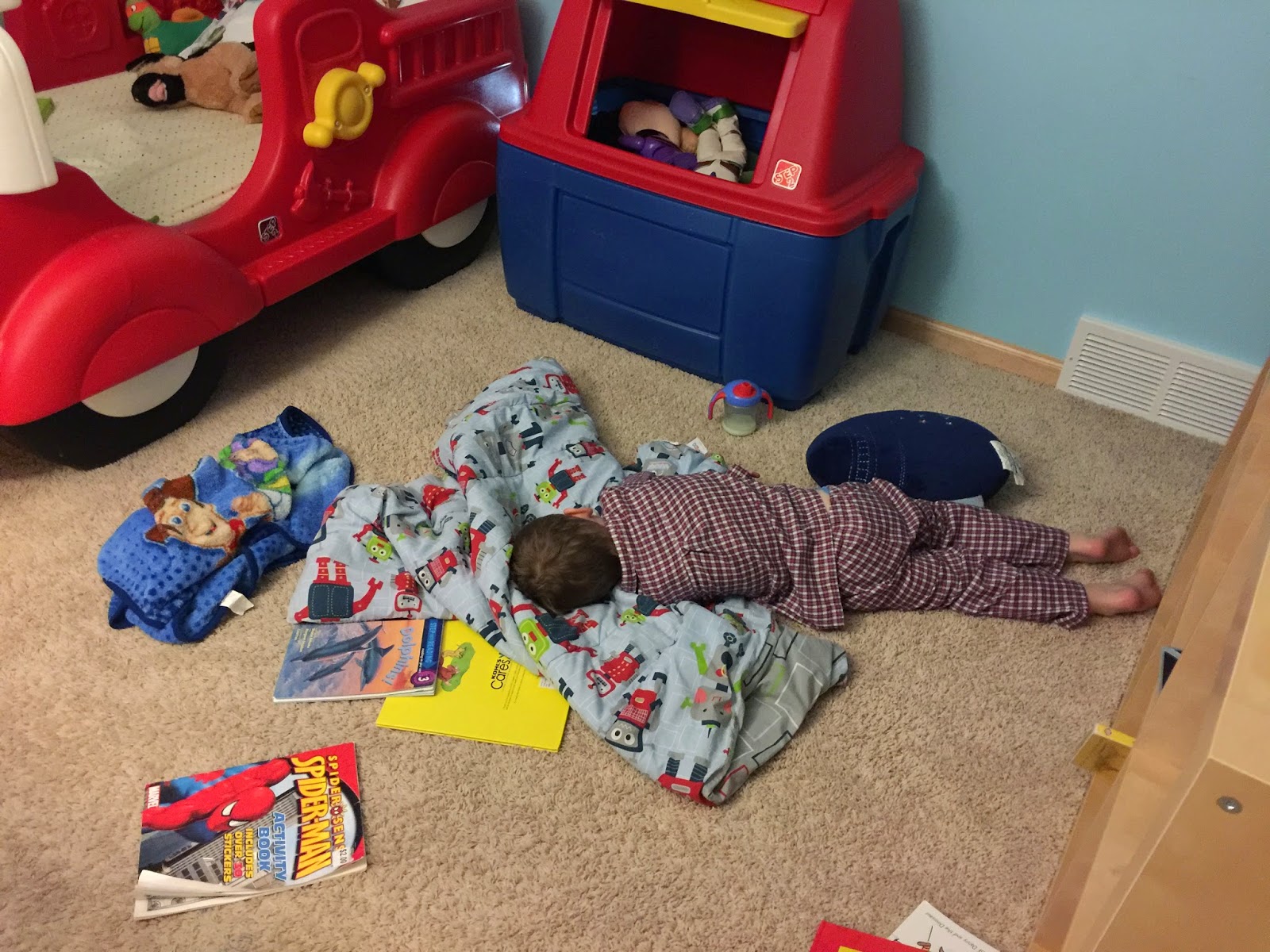 That sounds stressful. But yay for grouping ped visits into one horrible hour, right? Right?

You guys are so fancy! Love Jack's tie!