I read a really great book this week as part of a TLC Book Tour.

An Uncomplicated Life by Paul Daugherty is a wonderful story written by a dad, who also happens to be an award wining sports columnist for the Cincinnati Enquirer, about his daughter, Jillian, who has Down syndrome. 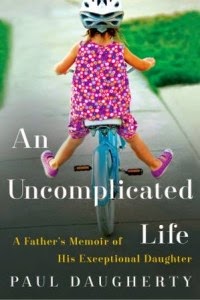 Daugherty and his wife have been untiring advocates for their daughter's inclusion in school and civic life since her birth, and he writes passionately about raising his daughter to live a life worthy of her dreams.  A high school graduate and a successful Northern Kentucky University student, Jillian Daugherty is engaged to be married to her boyfriend of nine years by the end of the book.  Daugherty writes just as sweetly about his daughter's blossoming love story as he does about her other milestones, noting several times throughout the book that Jillian has forced him to savor and celebrate the moments other parents learn to take for granted. 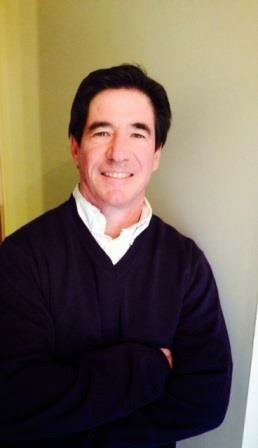 What struck me the most about An Uncomplicated Life were Daugherty's fascinating chapters detailing his struggles with the public school system throughout much of Jillian's middle and high school career.  He notes that IEP meetings were never easy, even in elementary school, but he suggests that middle and high school administrators were more burdened and less able to offer the resources Jillian was legally entitled to.  He is very honest about the nature of his struggle with public school, and he relates a rather shocking story about his wife, a pubic school teacher herself, in jeopardy of losing her own job because administrators were exasperated with the Daughertys' consistent attempts to hold Jillian's high school accountable to the goals stated on her IEP.  Naively, I assumed that including children with Down syndrome in mainstream classrooms was a commonplace occurrence that schools were used to handling, but Daugherty describes his advocacy as trailblazing, and he writes persuasively about the ways in which schools are forced to choose budget over services.

An Uncomplicated Life  is a love story , one that is sweet but not saccharine and one that will resonate long after you've turned the last page. Daugherty describes his daughter as a delightful, charming, kind woman, a person any of us would be lucky to call a friend, and Daugherty himself comes off pretty well, too-- a committed father, advocate, and partner who is also madly in love with his life.  If Jillian's life is, as Daugherty claims, uncomplicated, it is only because her parents so skillfully and selflessly shoulder her burdens, expand her horizons, and teach her the skills to negotiate the obstacles in her path.  That they do so with such boundless joy is what makes this story so satisfying.

Books on the Table said...

Great review! I just posted my review for TLC, so now I'm reading the other reviews. (I never read them before I've written my own.) I too was shocked by the way the school system dealt with the Daughertys. I thought it was a lovely book, and I can't wait to hear about Jillian's upcoming wedding -- I hope Paul posts some pictures on FB!

As a parent of a child with serious medical issues I can identify with some of Paul's experiences.

The love he clearly has for Jillian shines through your review as I'm sure it does through the book. Thanks for being a part of the tour!