Today was so unremarkable it's barely worth blogging about BUT WHEN HAS THAT EVER STOPPED ME? 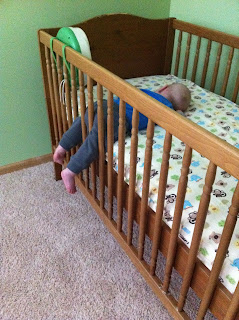 Cooper, as you can see above, had some nap problems.  Actually, that kid has a lot of nap problems.  We are working on naps, and they might be getting better (longer, more predictable), but to really facilitate that change, we need to be home more, and that just doesn't happen all the time.  We have also been doing cry-it-out, which we never did with the others because Cooper will.not.nap and then by the end of the day, he is unrecognizable he's so tired.  If we feed him, change him, give him his paci, and put him in his bed, he'll lose his shit for a few minutes and eventually fall asleep. I don't want to make him sad, but I also want him to go the &*%$ to sleep, you know? 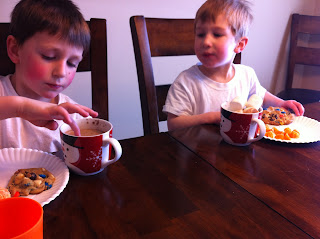 Harry and Jack helped Ben blow snow, and then they came inside for cuties, cocoa, and cookies.  Harry also had raisins, and he was making a face out of cuties, raisins, and marshmallows.  It was pretty adorable until he made his marshmallows into a caterpillar that crapped raisins.  Ah, boys. 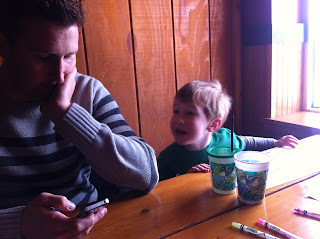 We went out to lunch.  Salads for Ben and me, hamburgers and applesauce for Harry and Jack, spinach dip and veggies for all of us. 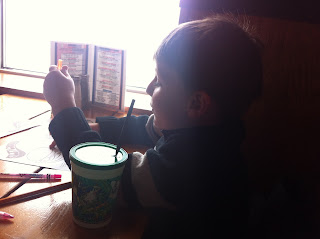 Harry is way into drawing The Cat and the Hat exactly like his teacher showed him on any surface he encounters. 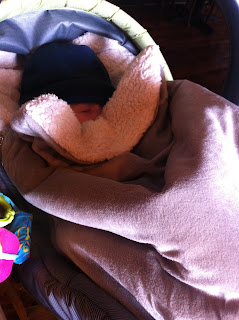 I brought pureed apples and pears, but Cooper slept.  I think I would too if someone carried me around in a plush little cocoon.  Ben should get on that.

After lunch, we went to an organic home and baby store to buy our special snowflake Jack a mattress pad, and we wandered around a craft fair (a step up from your usual craft fair, though-- beautiful pottery and some really, really cool jewelry) that Ben said was like walking through Etsy.

I started to get really crabby and demanded to be taken home for a nap (you just got really jealous of Ben who gets to spend the rest of his life with me, huh?).  I woke up, refreshed, to see Ben who had been manning all the kids popping Tylenol and swigging coffee.  We went to Whole Foods and spent twice our grocery budget on half a week's worth of food, swung by Panera to feed the kids, and as soon as Harry goes to bed, Ben and I are going to eat appetizers and drink wine and watch Contagion or Planet of the Apes or Crazy Stupid Love, all of which we got for Christmas, none of which we've watched.  Although if Harry doesn't go to bed in the next 5 minutes, I am just going to eat oatmeal raisin cookies.  Or my arm.  Whatever is closer.  So my arm, I guess.
Posted by Sarah at 8:17 PM

Look at how cozy he is!

Cry it out was the ONLY thing that worked for Wes. Sometimes it still works. Seriously, it's just what some kids need. So weird!