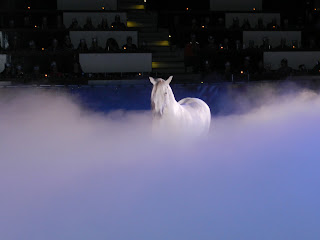 Can't you imagine that horse and that smoke airbrushed on a t-shirt? 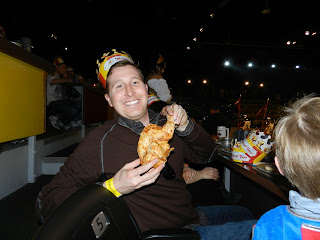 We rang in Ben's birthday at Medieval Times, which was really fucking weird.  We saw some old friends from college,which was of course fun, and we enjoyed eating with our hands and watching a really strange show about jousting for a princess.  Harry and Jack were all about the princess.  We got to stand next to her when we got there for a group picture, and today at lunch, they were talking to each other about how good she smelled.  There was a falconer, too.  Not at lunch today-- at the show.  Because a falconer at the show was weird, but a falconer in our kitchen would be batshit- like this clip.
After the show, we all stood in the lobby holding our souvenirs and to-go boxes, and Ben looked for a bench to put some stuff on so he could pee.  We made our way to one in a corner, wondering why it was empty in the crowded lobby.  We found out why when Jack tripped and fell down in a hue puddle of vomit.
We had to pitch his clothes, so he wore Ben's sweater home. 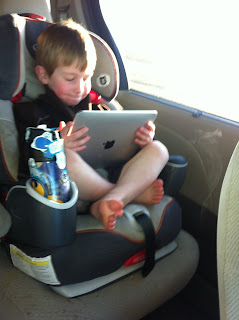 He didn't seem to mind. 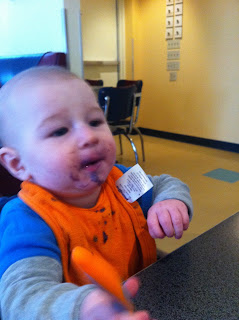 Cooper continues to keep it real and try new things. 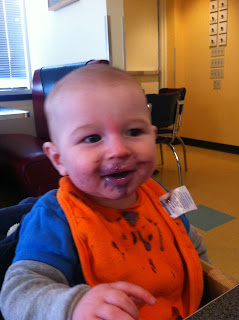 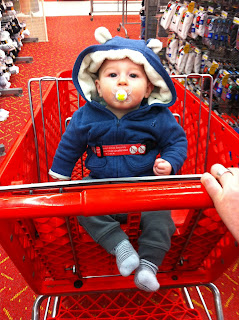 And sitting up in the shopping cart.

We're just sitting around waiting to catch the stomach flu, you know from the vomit bath.  I'll keep you posted.
Posted by Sarah at 9:50 PM

OMG. I totally gagged thinking about poor Jack in a puddle of stranger-puke. I may be ruined from Midieval Times forever. Though admittedly it's a totally random/kind of awesome place for an adult's birthday lunch. And now I want an excuse to yell "I'M the FALCONER!"

Oh that is SO GROSS. I've been to Medieval Times once, on a band trip in high school. I ate a chicken with my hands. So that was interesting. Love that H and J loved the princess!

Super cute picture of Cooper in the cart! He is adorable.

Actually, I visualized that first picture air brushed on the side of a windowless van.

I thought that was a unicorn when I first looked at the picture. That needs to be on the side of a conversion van OR a velvet rug.