A man of few words

It's no secret that I am crazy in love with jack. His sweet-smelling sleep, soft milk breath, toothy smile, stompy walk, old man hairline, and cute little cackle are the reason we will have 3 or maybe even 4 kids instead of just Harry and Jack. He's that cute. I think he's smart, too, although I can't be totally sure because he hardly talks. I remember waiting for Harry to start talking--and I know that he said a lot more at 15 months than Jack does-- and being so relieved when he acquired language so efficiently. I knew that he was normal, you know?

Jack can identify all of his facial features and some body parts, and he can do anything you ask him to-- he can even follow 3-step directions without a problem. Last week at Little Gym, he sat down on the floor just inside the door and stripped off his own shoes and socks. When we went into the gym, the teacher had hidden the bells that the babies ring to start class under a pile of scarves. He asked the babies to look for the bells, and Jack was the only kid who did-- he ran right to the scarves and threw them aside. When he found the bells, he started handing them out to his classmates. It was adorable.

But still, no talking to speak of. If he wants to hear music, he points to the iPod and requests "mu." He can say the usual baby words-- dada, mama, baba, night night, bye bye, no no, yeah. He says Jack and Har, and he points at the door and barks out. He also calls his dinner yum yum, and he asks for a hat by smacking his head and saying ha.

Hmmm. Maybe he talks better than I think. (Also, the way he nods his head yes is the best thing ever-- very slow and emphatic-- like when I asked him if he wanted cold pizza on Sunday morning, and he nodded his head off as he ran to his high chair.

Mostly though, he points. 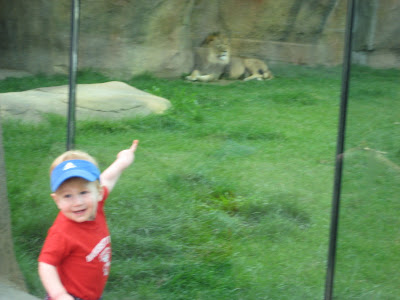 Do you freaking idiots really think I'm big enough to slide by myself? 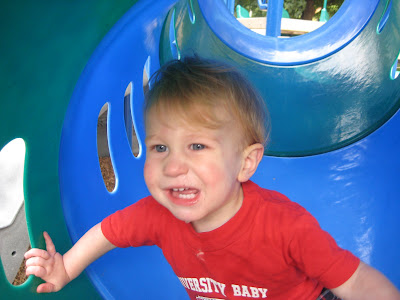 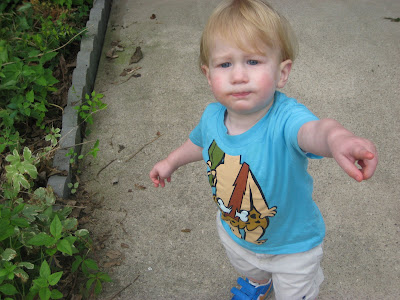 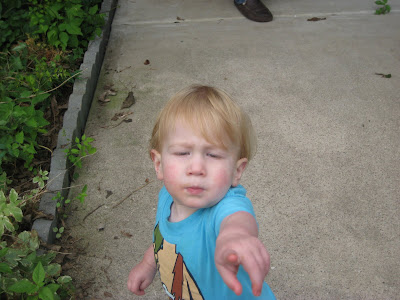 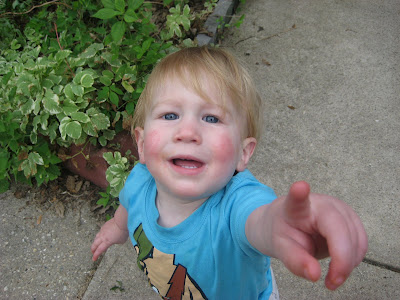 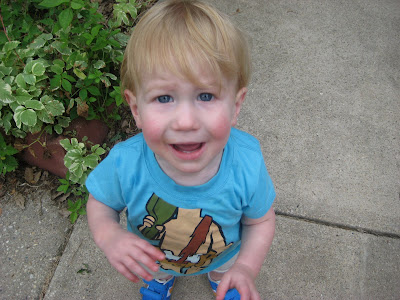 he is so stinking cute!! I love that point when they're almost talking and you get to try to figure out their own little language. Love the captions!

We are getting impatient with Wesley's first words already and he's not even 10 months. I swear he has a "word" for Charlie, but I don't think anyone else would agree with me.

Oh, the camera wars! And I did the same thing with AJU5's talking. I started a post about how little she says and realized she actually said a lot. Now she has even more words and is picking them up daily. It is crazy how fast they get them down!

Have fun at BlogHer!

Well, nobody talked as early as you did, the pediatrician thought I was imagining it! But Harry talked early. Jack knows everything you say. I think he will talk alot soon!
Besides, they are babies, and they NEVER say anything interesting, anyway. Ask them about health care, and public option. NOTHING! Ask them about green energy- again Nothing. Out of the mouths of babes comes drooling. Talk when you have something to say

totally sounds like MY Jack - barely speaks at all (even now at 22 months he only says a few words), but he sure can make himself understood. It is harder when your first talks early (like mine did too) and then your expecting teh next one to start talking and... nothing. I know there is no problem because he understands and responds to everything I say, but it can still be frustrating to have to deal with grunts and pointing. Talk already kid!! Just shows you that you can never count on anything being the smae from one kid to another. By the way - i totally laughed at your description of your son being so cute you were going to have more kids - when I was pregnant with my third I was DONE DONE DONE, and then i saw her and she was so freakin adorable that I've been trying to convince my hubsnad to have more ever since!

Thank you, thank you, thank you!!! Your blog is exactly what I needed after 2 days of moving with a 3 and 5 year old. Hilarious! Oh and my five year old spoke late as well and now I wish for silence they are all so different.