Eff word Friday: What kind of feminist are you?

I ask because I'm still not sure myself.

When I was an earnest doctoral student (not even a candidate yet-- just a course-work slogging wannabe who wore too much make up for the women's studies folks to like me), I really liked the wave metaphor for eras of feminist activism in the United States. I fancied myself a 2nd-waver living in the midst of the 3rd wave, a kind of throwback who embraced grrl culture and the "liberating choice" to dress kind of slutty and spend all my expendable income on grooming products but who still wanted to spell woman with a "y" and kick men out of women's studies classes and tell people who wanted to rename those classes "gender studies" to shove it. I kept my push-up bra on but torched the Beauty Myth, you know?

Back when I saw everything through an unquestioned, unmentioned lens of white middle-class, childless privilege (but before I started writing just awful sentences in my scholarly work about exploring theoretical underpinnings-- blech-- and I am a critic who has only a passing interest in theory, so really, I don't even have any business using the t-word in my work), this is how I saw the tidy waves of feminist activism:

First Wave: Women's suffragists. Rah-rah for the right to vote!
Second Wave: The Feminine Mystique, career moms, abortion rights, the Pill, politicalization of the personal, and sex outside marriage!
Third Wave: Really radical defense of abortion as a natural part of women's reproductive lives, Manifesta, overuse of the consumerist slogan "choice," simultaneous commodification and de-politicalization of the personal, a sustained interest (finally) in transnational activism.

But what about the progressive maternalists who acted out of first wave feminism and in trying to make the country better for women and children, helped to build the paternalist welfare state?

What about essentialism that started in the first wave, and continued into the second with Carol Gilligan and Nancy Chodorow, and washed into the third with Eve Ensler?

What about the unquestioned acceptance of the liberal subject as disembodied, of the ideal worker as childless and masculine, of the notion that women's participation in the public sphere is all that's necessary for equality, that we do not need to remake the public or force it to be concerned with private matters, that women can simply act as men in the public world, and all will be right?

Because I study reproductive rights, it makes sense that my thoughts about feminism all come down to the problem of "choice." On the one hand, it is a really horrible slogan for a movement-- pro-choice. Really? What the hell does that mean? Choice connotes the kind of marketplace discrimination that assumes we all have a seat at the table, that we all come to this choice with equal access to all available options. And certainly, it obscures important questions of life-- whose life? which life? value of a life?-- ceding the power to define life and answer all moral charges to the other side of the debate.

Beyond questions of abortion rights, however, I think the choice slogan hurts human rights in this country. Childcare, for example, is so much more than a choice. To say that when you have a baby, you either *choose* to stay home or *choose* to work outside the home boils so many lives down to an either-or fallacy and obscures the decisions real people make using their available resources-- and of course, we all reason from different places, with different values, and with access to very different material and spiritual conditions. A glib word like "choice" that assumes so much agency and glosses over so much inequality makes us have cultural conversations about the wrong things. About mommy wars instead of federal dollars for daycare, for example.

I still don't know how to label my kind of feminism. The day Harry was born, it all sort of fell apart for me, all the neat boxes, the carefully delineated waves, the sureness that I'd WOHM without regret, that I knew exactly how to handle an unplanned pregnancy.

Please tell me because I really want to know: what is feminism for you? what is the most important feminist issue facing our generation? where do you see the movement (if we can still call it a movement) going from here?

Most importantly, how has your view of feminism changed since you had kids?

Because for me, these guys (pictured dancing to EELS' Prizefighter) changed everything 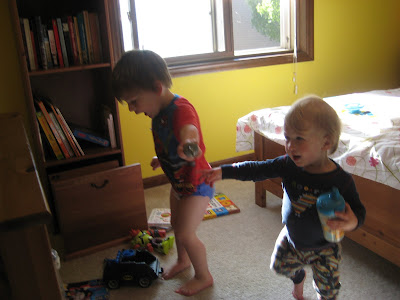