My summer class started today, and I remembered on my way downstairs from my office to the classroom how much I hate the first day of school. It's boring, for one thing. Introductions. Going through the syllabus. Watching their eyes glaze over as I explain the point breakdown, but knowing that if I don't go over it, at least one person is going to ask about it at least once and probably more like 5 people 64 times. Even though I told them over and over again to call me Sarah, I got called Dr. a whole bunch in class and in emails, too. Better than the old "Mrs." I used to get, I guess.

One guy said the class was too much work and walked out mid video (it was a cool video about the history of organized birth control advocacy in Wisconsin, but it started with a mildly off-putting montage of rudimentary birth control devices like fish scale condoms, pebble IUDs and diaphragms fashioned out of lemons. So, I wasn't actually surprised when he left). But the rest of them stayed despite the giant course packet and multiple textbooks and handful of research, writing, and speaking assignments.

And the emails! Since class got out, they've been pouring in, and I've been answering them remembering how nice it was yesterday when all I got was coupon notifications from J Crew and messages that some more porn-bots were following me on Twitter.

Harry and Jack were really excited to see Jamie, who has been on vacation. I was really, really glad to see her and even gladder to hear that she is NOT leaving us and will be here for an entire calendar year. I almost wept with joy, in fact.

But enough about my kids, it is time to obsess about my hair, which I had done on Saturday, and it looked SO AWESOME! 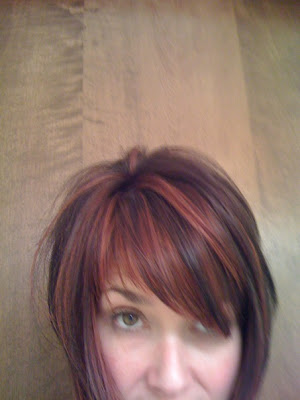 My stylist told me to wash it once a week or the red would fade (because red fades the fastest but sticks around the longest). I bought some color-depositing shampoo to use on the front bits when I washed it and vowed to just rinse and condition until next Saturday.
Sunday, I didn't even get it wet, and it was still awesome! 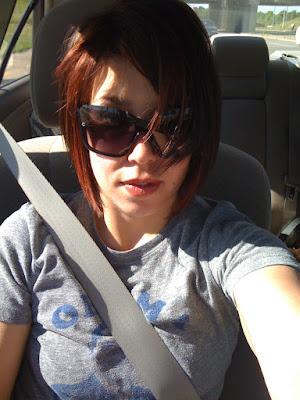 Sunday night in the shower, I rinsed and conditioned, but this morning, it was nasty and flat and greasy, and I almost cried. Then I washed my hair (gasp!)
And now it's orange. 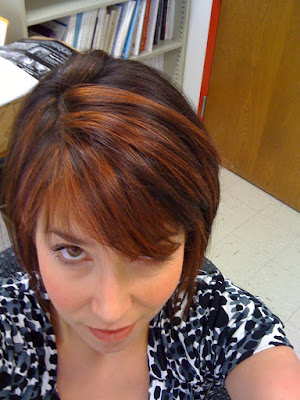 Here I am in Harry's t-shirt. Ben and I were folding laundry and Ben was mocking me and saying it was my shirt. I got all offended until I tried it on and it sort of fit. 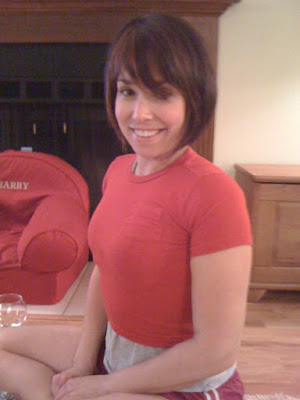 Oh man. My class just ended (as in, I just submitted grades 5 minutes ago), and I've been basically dancing around everywhere today. "No annoying emails! No assignments or lectures or quizzes to write! No place to be for 4 hours a day (we have a 2-hour screening in 250)! TRA LA!"

I think I want to take your class, but not actually do any of the work.

Also, putting on Ethan's shirts is one of my favorite things to do after a few rum and cokes.

Oh, and my hair stylist tells me to only wash mine once a week too. Um, no can do.

Hahahaha, Harry's shirt! Too funny. I love your hair!

Your class does sound really interesting.

Well, I would say it is better for it to "fade" before the first day of class and then stay that same for a while. Otherwise you might have to field questions :)
I think it still looks great!

Second, you can really tell in these photos that you've lost weight. Not that you needed to, but you do look great!