How could anyone not want another one of these? 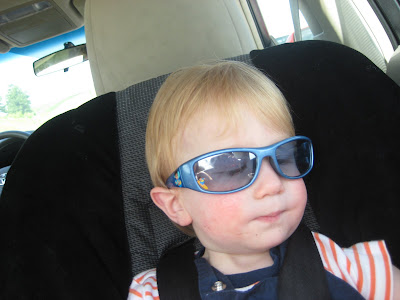 OMG. After spending 2 mid-July days freaking out about January, I think we're okay. We got a spot (2 spots, actually!) for Harry at the adorable Unitarian church preschool we have wanted him to go to for 2 years but never were high enough on their wait-list to attend. He actually can go there a whole bunch of times a week, which is freaking awesome for him. AND Jack can probably go there next year, too (fall of 2010), which is beyond awesome. Not a huge help in the childcare quest, but we think that might be closer to being worked out, too. Phew.

On a baby #3 note: I am a psycho. One minute, we are touring a daycare center, and I am welling up with tears because I realize that I think Jack is too young for a place like that, and I could never pack up an infant and send him (with a tupperware full of his own clothes, pacis, and blankies) to hang out in a classroom all day with people who aren't me, so I might as well not have any more babies. The next minute, the childcare crisis has been resolved in a very flextime/both parents share the work/ part time SAH kind of way, and I think, "No problem! I can just sling #3 to my body and take him to work again!" One minute, I am at Kohl's buying Harry all manner of licensed character underwear and delighting in the fact that half of my chlidren can toilet themselves**, and thinking how nice it will be to be done with all the baby stuff. The next minute, still at Kohl's, I am loading my cart with Carter's one-piece snap-crotch outfits for Jack because he is still a baby damnit, and I love babies and their sweet little baby clothes and this cannot be the last time I buy somebody clothing measured in months.

** This self toileting thing? Not the dream I thought it would be. Harry literally woke up dry 2 days ago, ripped his night time Pull-Up from his chubby little body, and asked for Spiderman big boy pants. Then he demanded his privacy, sprayed the bathroom with urine, and asked to be helped onto his Diego potty seat to complete his business. And that was it. Bam! Toilet trained. When I picked him up at school, he said "I need to go peepee, but I can do it myself," and he ran into the men's room, peed (I'm not sure where exactly-- walls, floor, toilet base, urinal?) flushed the toilet, hauled a stool to the sink, and came out cheerfully drying his hands. I was totally speechless. We started to walk out of the building, and I noticed that his pants were still pulled down a little bit, and his penis was visible poking out under his shirt tail. Hahahahahaha.

But really, I am still wiping his butt, and there is pee EVERYWHERE all the time (and yes, he aims at Cheerios, the problem is he doesn't want to use a stool to help him reach the toilet-- he just sort of gets really close and lets it rip, but he's really short. Also, he wants his privacy at all times in the bathroom-- I just get to go in when he's done and mop things up).

I am feeling very smug and vindicated about the whole thing though. He's been wearing PullUps for at least 6 months and peeing and occasionally pooping with limited success and lots of prodding. We took it slow and followed his lead and let him decide on his own timeline, and then suddenly, he woke up potty trained. Score one for the lazy parents!
I love how much this kid loves cheesecake 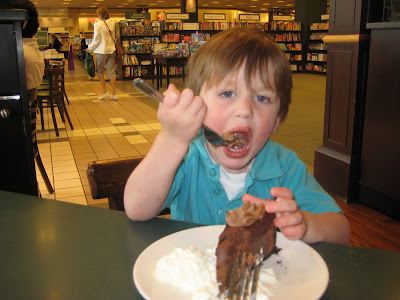 Potty training IS a huge PITA. Especially when you consider that you are probably spending all of $13 a month on diapers. And Charlie still requires constant reminding. Last night he went into the bathroom and went all by himself without being asked and without telling me about it and I almost fainted with joy. We don't let him stand up, though. He sits and then all he has to do is aim it down. Even that is messy sometimes.

I just snorted my coffee from laughing while reading this post! Too funny!!
I'm really glad to hear that Harry potty trained very fast when he was ready. We're hoping our little man will do the same.... hopefully soon!

Jack totally looks like a mini- Bono in those shades.

We do not encourage standing in this house. Way too messy!

I always had the boys stand to pee! I mean, they can't make more of a mess than EVER OTHER GUY, can they?

Your lazy parenting potty training gives me hope. I so hope Ethan wakes up potty trained.

You have to love the ups and downs of potty training, huh?! Bella came to me the other day to tell me how she peed like daddy did. I made her reenact it for me and laughed my arse off! High Five Harry!!!!