When Ben picked me up at BlogHer (curbside service-- he also dropped me off-- love that guy), we spent a crabby half an hour running around the hotel searching for a bellman, someplace to buy milk, and a changing table. Then we valeted the car and walked around Michigan Avenue with Harry and Jack. We fed them lunch at Potbelly (because they are only barely mall food court material, and we couldn't bear the thought of dealing with them at an actual restaurant) and took them to the park to check out the giant bean.
Ben rocks the Vera Bradley bag, huh? 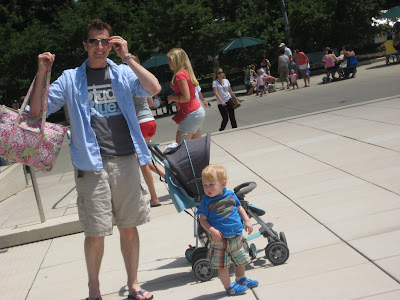 Harry wanted to pose in the flowers, which cracked me up. Probably because he always gets his picture taken against the cheesy spring flower backdrop at the mall photo place we use-- it just seemed like a natural place to pose. 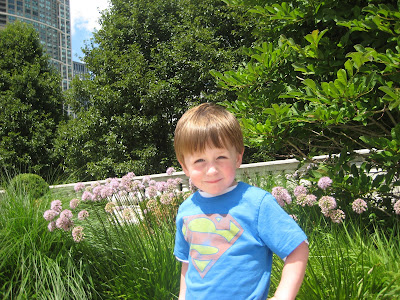 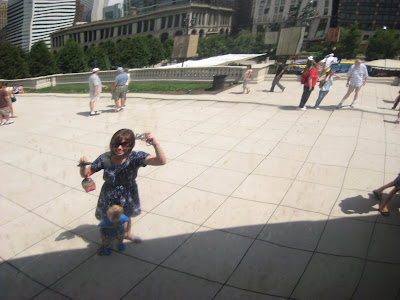 I'm kind of hoping neither Harry nor Jack gets my big butter paddle front teeth. Yikes. But still, I kind of like this picture. 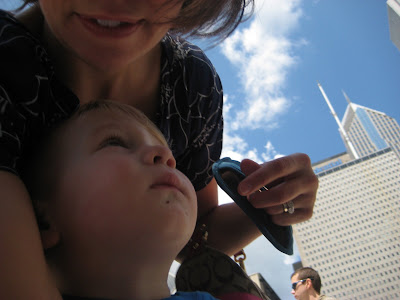 We drove home after the park, the kids nicely unconscious in the backseat, and we went straight to a pizza place on the lake, deciding to try our luck at a sit-down restaurant.
This picture and about forty others just like it was taken outside the restaurant where screamy Jack and I hung out(after twice trying to come back in the restaurant and rejoin the rest of the family) while Harry and Ben ate. And ate. And ate. And had refills on their wine. 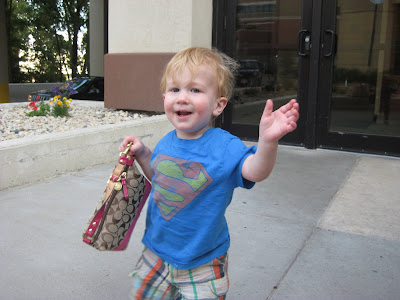 Ben thought I would come back inside. I thought Ben would call and tell me we should switch when he was done eating. We both thought the other person was an idiot, and we fought for the next 8-ish hours because at the end of the day, we are BOTH grudge holding assholes. But now that I think about it, Ben's argument sounds more rational. I will so regret ever typing that.

We have been ridiculously busy these days. Traveling on the weekends. Working long hours. Generally getting our asses kicked by a new StudyBlue launch and summer school. Steeling ourselves for the fall when I'll be working a real job for the first time ever (or at least since I used to work at the mall after I graduated from undergrad).

One new policy we have instituted that has changed our lives for the better? We write our menu for the week (including side dishes) on the fridge on Sunday, and every night after the kids go to bed, we cook dinner for the next night. It cuts into "sitting on our asses and staring at the TV and our Macs" time and it has caused us to drink more wine. But it's also allowed us to cut out takeout entirely, has reintroduced us to real preservative-free, unprocessed, chemical-free(ish) food, increased our daily vegetable intake 3 fold, and has made the burden of feeding the family a completely equal one. As a result, we've both been able to work a little later, but we have dinner on the table within moments of walking in the door and getting mobbed by the kids.

Also, chicken taco meat tastes better when it has a day to soak in its Old El Paso flavored juices.

Anybody have any tips for keeping our crap together when we're both working this fall?
Posted by Sarah at 1:01 PM

Good for you guys! I stay home and we barely eat vegetables. Would you consider posting your menu on your sidebar so we can all get some ideas? I think that's the hardest part... the ideas.

I love that you cook the next day's meal the night before. How proactive of you! How cute that its the both of you doing the cooking too. I'm guilty cuz Eugene does most of the cooking, but I bet he'd love it if we did it together. Thanks Sarah!

If you like the schedule thing, then you could also schedule in the "weekly" chores like laundry, mopping, bathrooms, etc. I am not that organized, but I have been good at doing the laundry on Friday or Saturday most weeks.

I love the cooking the next day's dinner idea together -- that's a great one. We rarely eat meat because I hate touching it raw (even with a knife), but doing it your way, I could make Sam deal with meat!

This is only tangentially related to your question for ideas, but I really saw this article recently and really liked it. I made Sam read it and he liked it too:

thanks for the suggestions.

Kim, I LOVED that article-- we sometimes have lunch dates on campus, and they're great. I'm going to try some of the others, too.

I'd totally post my menu, but I'd also love to see your (all of yours, really)-- it'd be fun to get recipe ideas from blogs I already read :)