Good thing he likes it rough.

Jack, that is. He loves to be pummeled by Harry, is just grateful for the attention. 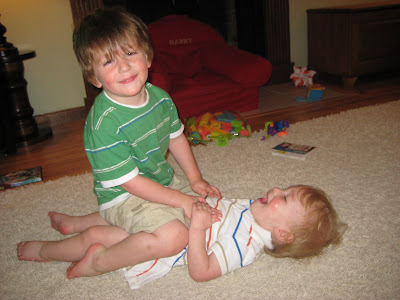 Ben took Harry to work this morning, and I swear to you, Jack has been lost without him, even though he has free reign over all the toys and can drink his milk without fear of reparations The first thing he did was put on Harry's Spiderman mask and laugh and laugh. Then he pulled the little arm chair that says Harry in front of the TV and plopped down to poop and watch Elmo (judge not! we didn't used to let J watch TV, but then we realized that Harry, who could sing the Elmo's world theme song when he was around Jack's age, had a lot more words. Maybe he got them from the TV? so, yeah. it's educational).

Speaking of preschool on TV, Noggin might be our only babysitter option for the spring if Jamie moves away after she graduates. So, we're freaking the freak out to put it mildly. The problem is that all the "good" places have been full since March. There are a few oddly timed part time preschool options for H (who is already enrolled in preschool, but there have been some really awful staffing changes, and we're not sure if we're staying there) and ONE fulltime spot for J. We're checking that out today. Not only is it twice our mortgage (!), it's 40 hours a week, which we do not want or need. And the place closes a half hour before my class is done, meaning Ben would actually have to work LESS hours even though we'd have MORE childcare. Clearly not ideal. There are a couple of places we could enroll Harry, hoping that his enrollment now would be enough to secure a part time place for Jack in the spring, but that's touchy, too, because our schedule for fall is set and perfect-- these new places for Harry would cause lots of stress August-December and maybe not help us at all in the spring. So, blah. Any suggestions besides praying Jamie stays with us through the end of the school year? (and I cannot quit my job-- the health insurance is a dream).

What else happened to me lately? Oh, I got a flat tire and spent hours at the dealership yesterday with Jack, who only wanted to run up and down the halls pounding on walls and screaming, despite the toy room filled with toys, snacks, womb chairs, and TV, only to learn that the tire could not be repaired, and I get to come back today (with both kids) to get a new one. Also, I totally love the new Highlander.

Mostly, though, I have been cleaning up after these guys. Which? Full time job. 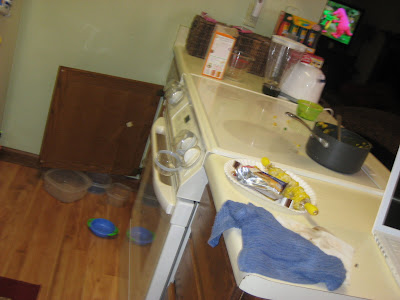 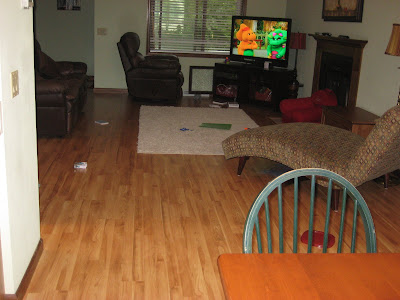 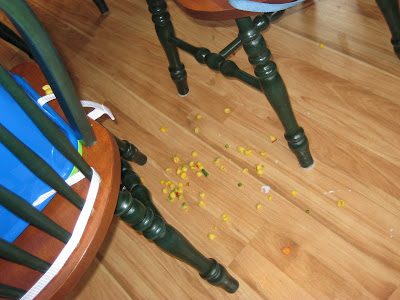 These pictures do not do justice to the AMOUNT of mac n cheese and veggies all over the place, or the amount of baking pans, cutting boards, and tupperware strewn about the downstairs. Harry told me that veggies in mac n cheese made it "ruined" and that he and Jack like it "plain." Except he said "wuined" and "pwain," which took the sting out of the criticism.

Look how doughy they are 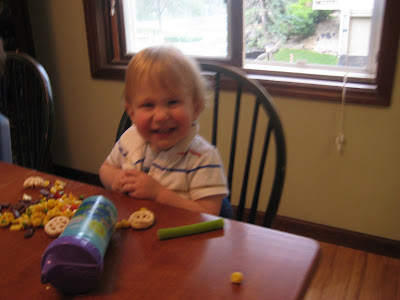 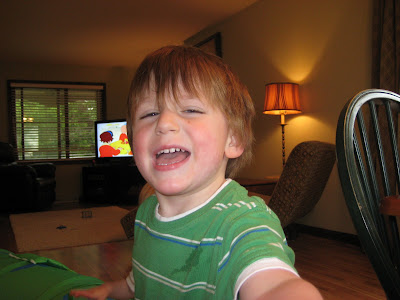 We have been cooped up inside all week because of yucky weather. I've pulled out all the big guns: tunnel, Caillou, baking crap I can't eat, making smoothies in the blender. Today, I have fingerpaints and butcher paper for after the car dealer. Fun times. 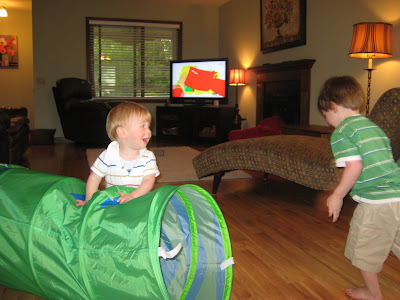 And I'll probably have to get out the tunnel again. For Ben. 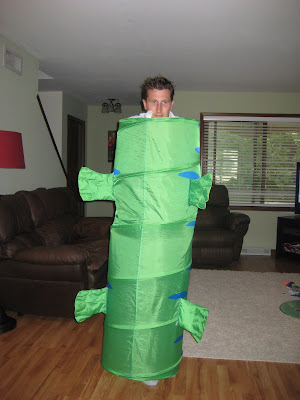 Untitled from sarah on Vimeo.

Charlie is STILL in his daycare part time because I'm afraid if I lose his spot we will never find something as good again. Now I just need to find a job.

Mia too, is talking way less than Bella did at her age. Could it be that our 3 year olds don't stop talking long enough to let the 1 year old chime in? Oh and I'm shooting for a record--how many times in a week can you feed your kids mac-n-cheese. I'm ashamed :)

this is a cute video. It probably gives Jon PTSD!