Have you ever gone to visit family and not taken any pictures of them?

Because that is what I did over the 4th of July.

We went to Des Moines to see my grandparents and my Aunt Leslie and cousin Molly-- my mom came and my brother Ben, too, and I only took pictures of my kids and anyone who happened to be standing close enough to my kids to get in the picture.

Sorry guys-- no photographic evidence of a really fun weekend!

I planned to post these pictures (of me, Ben and our kids-- no one else because we're jerks) sooner, but Michael Jackson! The memorial! The constant talking about the memorial! All the documentaries that are always on MSNBC! I could not look away.

One cool thing I learned from the MJ memorial (please don't roll your eyes at me if this sounds both selfish and naive)-- I have got to stop passing time from one milestone to the next and just realize that this? Is it. My whole life. It's loooong afternoons and rushed mornings and sleepy bedtimes and potty accidents and diaper rash and date nights and loving my first cup of coffee of the day and finally reading some Jodi Picoult novels. I waited and wished and hoped for my dissertation to be done, and my life has not been magically transformed by the experience the way I thought it might be. Same life, less research. I imagine this will be true for other things I've been waiting for, and if I'm not careful, these days will be over, and I'll be older and still have the same life and possibly some regrets.

(so funny/ironic/stupid that I have been typing this sitting at the breakfast table with my back to Harry and Jack who are playing with action figures on the living room rug. Can't enjoy my life when I'm being all meta, you know?)

Jack likes to be held upside down. We get weird looks in pubic, but it changes his little attitude 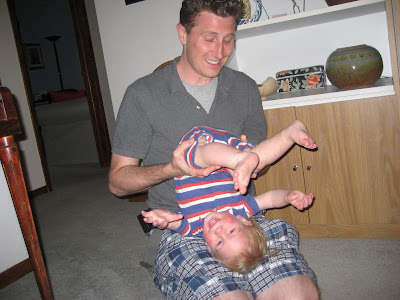 Luckily, he usually has a pretty good attitude-- unless, you know, I have somewhere to go or something to do 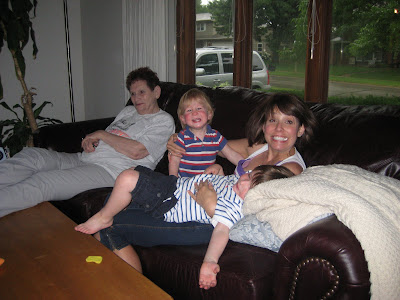 Harry called this ball a bubble, and he and Leslie washed it in the bathtub, which he thought was hilarious. He spent the whole afternoon at my aunt's house all by himself, and he had so much fun playing with Molly's old toys and eating watermelon. She asked if he would want to come over and play, and I had him and his car seat on her driveway in like 42 seconds. In the movie version, she would still be hanging up the phone when the tires would screech outside, signaling his arrival. Molly, Leslie, her partner Jerry, and his son Nathan took Harry to see Ice Age 3, which he has been wanting to see ever since McDonalds started giving Ice Age toys in their Happy Meals and this MOTY started swinging by the golden arches after soccer practice (oh my lord, could I BE more of a stereotype-- I actually told Ben that I'd like to trade my Camry for a Sienna, and the other day, I tied a white cardigan around my shoulders). Harry is usually a fantastic movie-goer, but he fell asleep as soon as he saw a preview for Cloudy With a Chance of Meatballs. After the movie, he still had most of his ginormous slushie and bag of of popcorn. When Ben asked him what his favorite part was, Harry looked confused and said "There was no movie, Dada." 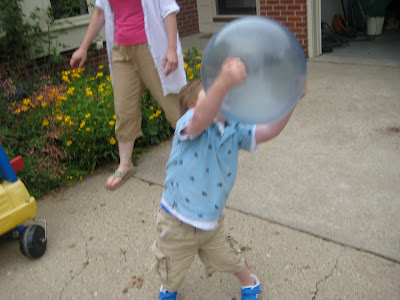 We had so much fun playing outside-- Ben and I played some ultra competitive badminton, and we played with a bunch of cool toys. 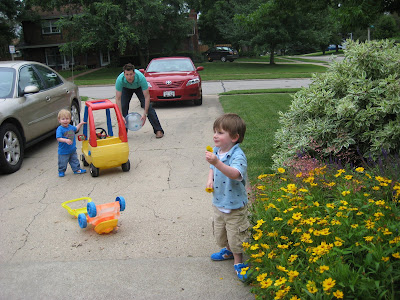 Then the Bens took Harry and Jack back to the hotel to swim and go to bed, and I stayed at Bomma and Jacks for some brats and wine-- and look! A picture of the fam!! 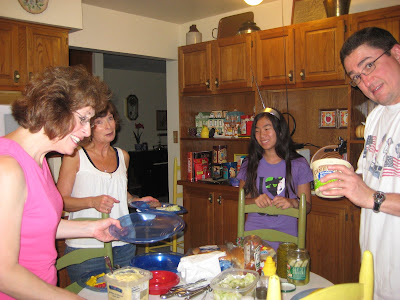 I love this post. I've enjoyed reading your blog for a while, but I've never commented. I felt the same way after completing prelims. I was so sure my life would feel radically different, that somehow the clouds would part and rainbows would appear. It was a little disappointing when nothing miraculous happened except that an ominous dissertation cloud formed. :o) -Michelle M

thanks Michelle-- I love the cloud metaphor-- it is so true. sometimes, mine felt like my own personal thunderstorm just raining on me everywhere I went.

Yeah, I've had to force myself to realize that "this is it" a lot recently too. Nothing to look forward to... this IS what I've been looking forward to. Time to enjoy it! Whee!