Tonight, I was cleaning the kitchen like always and heard Ben, Harry, and Jack screaming with laughter upstairs, like always. There were a few ominous thuds, but those, too, are part of our nightly routine. I came upstairs struggling under the weight of my huge work bag and the vacuum cleaner, Jack's night time bottle wedged under my chin. Ben met me at the top of the stairs, and I thought he was there to relieve me of my burdens and open the baby gate, but Harry accosted me before Ben could make his move and screamed, "Daddy's bleeding!"

I looked at Ben and noticed that his eyes were watering and that he appeared to be looking at me with a sidelong gaze. Except his head was facing forward.

"Why are you crooked?" I asked.

"Why are you spelling?" I asked.

"Because," he said. "I dob't wabt to bake hib feel bad. We were just playing."

They were playing Harry and Daddy, where Harry is Daddy and Ben is Harry. Harry-as-Daddy had just requested wine. Ben-as-Harry offered to procure it, and Harry broke character (and Ben's nose) by refusing the offer with giggles, a chortled "I can't have wine!" and flailing legs.

To my credit, I waited until Ben left for the doctor's office before I laughed so hard I cried. Harry saw my watery eyes and asked if he broke me, too. Then he kicked Jack during a pre-bath wrestling match and screamed so loud I heard him over the vacuum that he broke the baby.

Luckily, no one was broken during the filming of all-cousin-pool time on Friday 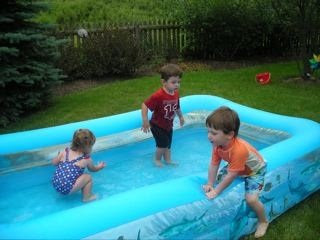 As usual, Jack avoided the pool. He hates water so much I sometimes think he's rabid. Look! It's a mini-Jen and a mini-Ben in a mini-house. How teeny and adorable. 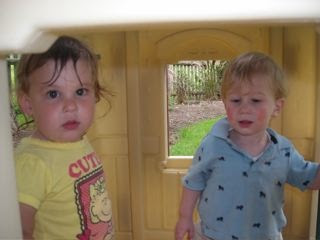 While I was blogging it up on Friday, Ben and his mom took the kids to see their great grandma. 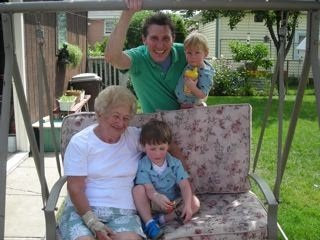 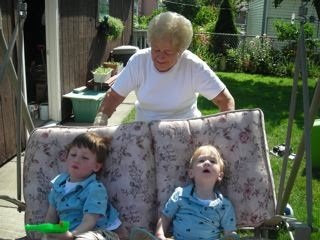 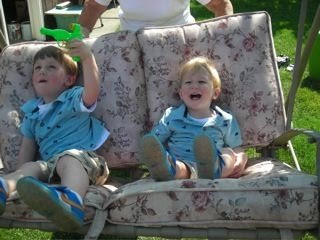 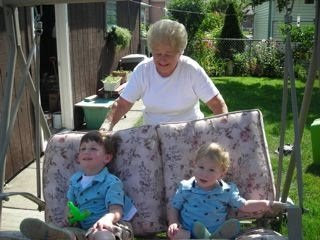 I love this picture because I can tell how freaking annoyed and blotchy (Ben gets blotchy when he's unsettled) Ben is. Sure enough, I asked him, and he said Jack would not get off that swing, but he looked like he was going to fall off any moment. If I were there, we would have totally had a fight because I would have been like, "What's wrong?" and he'd say, "Nothing." So I'd say, "No really, what is it?" and he'd say with a little more feeling, "Nothing!" I'd be all, "But you're making a face like something's wrong," and he'd scream, "God Damnit! Nothing's wrong!" 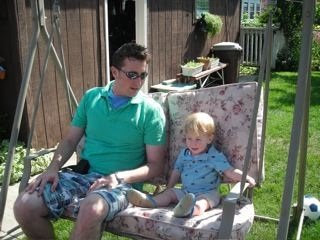 Okay-- Ben's home with a puffy, crooked nose and a semi-black eye and an appointment to see an ENT for a "reset" tomorrow. Awesome.
Posted by Sarah at 7:34 AM

But this post was absolutely hysterical! We have the same "What's wrong" "Nothing" game at our house. It's loads of fun.

To my credit, I waited til the end of your blog before I laughed so hard I cried...

The description is most hilarious, but I do feel bad for Dada...hope everything comes out fine with nose, ENT, and whole family....Bomma

At first when I read your FB, I didn't realize it was Ben! I was thinking Harry did it to Jack for some reason.

Poor, poor daddy. And poor, poor you because you will have to deal with an injured husband. Which we all know is waaay worse than an injured child.

This post definitely made me laugh, although I do feel sorry for Harry and Ben. It was so sad to read that Harry thought he had broken you and Jack too! Hopefully Ben will be fine in no time so Harry can forget about this accident.

I hope Ben is feeling better soon, and that the nose heals up the way it's supposed to!

Ahh... he spelled his pain. So funny.