Here we are at an amusement park where we spent 5 hours because we were having so much sweaty, gravely fun.

We were so stupid, by the way (shock!) because we thought the kiddie rides said 54 inches and up, but OF COURSE they said 54 inches and shorter. So we took Harry on all the scary grown up rides (well, Ben did-- I am a ride wimp), and he LOVED them-- even the really roigh ones like the hot air balloon tippy swings and the octopus-like casino ride. When we realized our error and put him on the kiddie rides, he was really, really bored by them-- far too sophisticated for fire trucks on a track, that's for sure. He did like this, the kiddie version of those scary rides that usually kill people when their hydraulics fail and everyone plunges to the ground in a wave of soon-to-be-severed legs and blood-curdling screams. 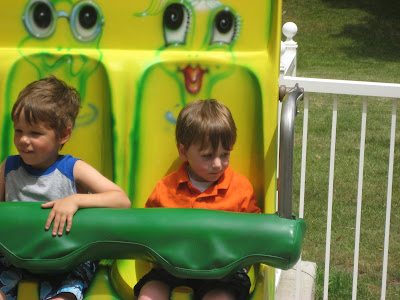 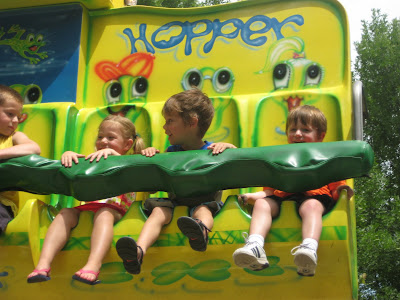 We though this place would be such a fun summer job for high schoolers and college kids (let's play carnie! now with less bearded lady!) but then we looked around and realized it was all retirees. Our economy sucks.) 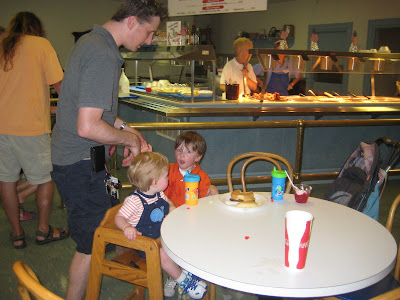 Ben being strong man. And it's not that the 12 year old girl who went after him hit the bell harder, it's that there are different standards for women and girls, so that's why the "winner! winner! winner!" lights lashed for her and not Ben. 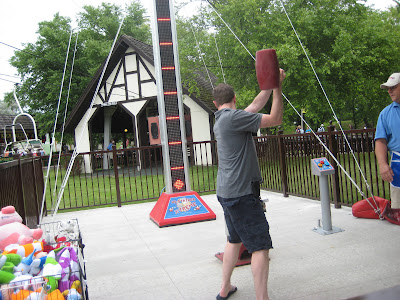 That sounds snarky, but really. It's true.

Instead of buying the kids toys, we decided to play all those silly fair games and WIN them some. Because we suck at math. 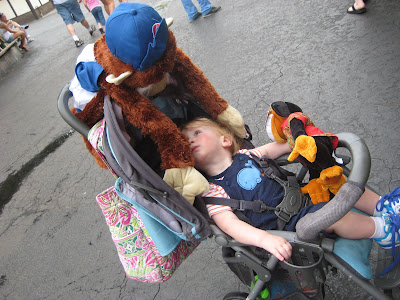 The teacups scared the pee out of Jack, but he was a good sport. 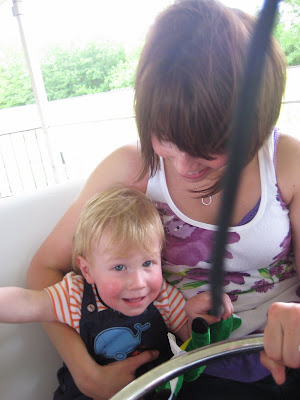 Jack LOVED sitting on this ride. And then he tried to climb out, and the ride was OVAH. Harry was bored. Hes so cool. 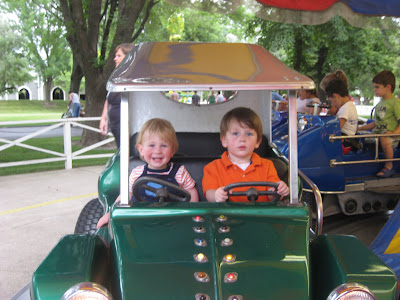 Wow, fun!! Don't worry about yesterday's post... I hardly got any comments yesterday (like two) either. I think it's a Friday/Holiday thing. I'm still thinking about my response too. I feel like it should be more intelligent than "yup, I agree!"

I actually really loved yesterday's post, but my brain was fried. I wrote and deleted like 3 different responses because I didn't think any of them quite made sense (shocking, I'm sure). But if Becca responds "Yup, I agree," then I'll just say, "ditto Becca".

I just read your post today. Holiday weekend = internet radio silence for us! I can't sit down and write out a decent response right now to such thought provoking material, but thanks for putting it out there.