I feel like we really took advantage of more of the things our pool has to offer this summer.  Dorothy did water ballet, and Jack joined the dive team.

For 2 hours every morning and another our at night, Jack went to dive practice.  EVERY DAY of the week.  The coaches told me when we signed up that practice was flexible and Jack didn't need to be there the whole time and could come when he had a chance.  But!  Nothing Ben or I said could convince him of this, and he literally practiced for 3 hours a day.  Well, I guess only 2 hours on Friday because Friday nights were dive meet nights.

He got second-place at his first meet with a score of 77-point-something.  Then he took a few thirds, a fourth, and another second, his score getting better and better each time.

Last week, he remembered how to back flip again, enjoying it for the first time since he smashed his face on the board last summer.

Yesterday, he competed for the first time in the All City Dive Meet.  All summer, swimmers and divers from around the city compete in dual meets against each other.  Then, the last week of the season, all 13 pools compete against each other.  The kids LOVE it, and the coaches make a huge deal out of it-- there are team-building activities at the pool, etc.

It was our first time there, so we didn't know what to expect. I packed a huge picnic basket and then we pulled up to the pool to see that the parking lot was lousy with food trucks, but I made the kids eat the picnic food anyway, etc.  Harry was way into watching, but neither he nor I could get it together enough to keep score on the score card.  Dorothy and Cooper were thrilled with carnival games and face painting, etc.  I wish I had brought them in their suits for the log roll, but WHO KNEW.

Jack was near the end of the 33 divers in his age group, so Harry and I devised a half-assed scoring system where we kept tally marks for each round of kids who scored 5 or higher (from any ONE of the 6 judges).  This was an incomplete  way to do it, of course, because the high and 2 low scores are dropped and the remaining scores are multiplied by the DD of the dive. The score card had the diving order on one side and grids to keep score on the back, but you could only keep score of 3 divers per round, so we were just all discombobulated.  But!  Using our makeshift method, we thought Jack would make the cut to finals, where he needed to be in the top 16 to advance,

His back dive was GORGEOUS, and Ben and I started to get really excited.  Except for 3 AMAZING kids who saved the big guns (like double somersaults and double back somersaults) for the final round, the rest of the kids were clearly in Jack's shoes-- one good dive and one not-as-good dive or 2 not-totally-solid dives in their pockets.

When he originally made finals, he said "I am going to get 16th place because I only have my 2 worst dives left!" But his coaches talked him out of that pretty fast.  Still, we could see on his face that he was not feeling great when he stepped onto the board the final time.  His final dive was terrible, scoring three 1s and three 2s, but he came out of the water smiling and shrugging, happy that the judges had scored his effort instead of DQing him (because that's how terrible the dive was, and I am glad he knew that and was so chill about it).

He ended up taking 9th, and the kid from his team who has been beating him all season took 8th (and that kid was 9th last year, leading Jack to admire the 9th-place ribbon on that kid's bag all season and wish for one of this own.  WISH GRANTED).

He went straight to the pool after the meet and did his failed dive perfectly 3 times in a row and then taught himself a reverse dive and a reverse flip like they were both NBD.  Okay, then. He's a diver.

I mean, would you LOOK at these smiles??

Leaving for the meet: 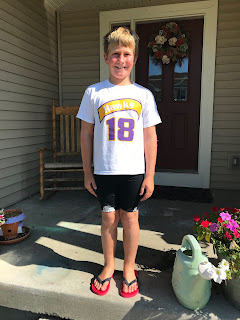 Finding out he made finals: 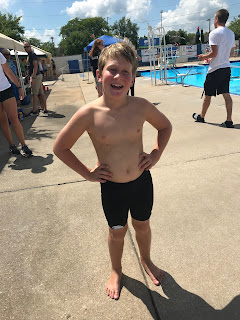 (Also, they just announce the finalists after a few minutes of scoring, Jack was 27/33, and they call the divers by dive order.  Harry and I were looking through the dive card and checking off the finalists, but Jack was sitting in the team tent FREAKING OUT because he didn't hear his name called until the end.)

So chill when the final round was over. 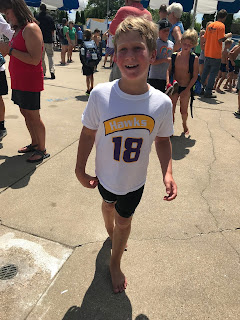 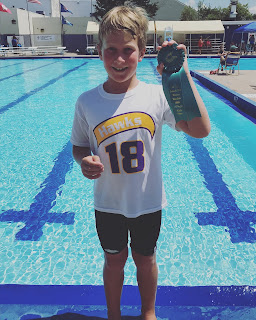