We had a weekend of sick kids.


We were supposed to hang out with friends to RTTP on Saturday night, but then I gave Jack a hug (Which was a TOTAL MOTY for me because I don't know about you, but as my kids get older, I feel like I am less and less demonstrative which, to quote the Prez: Sad!  Also MOTY because Jack was being a total asshole, and my reaction was that he needed a hug)  And then I noticed that he was BURNING UP.  Oops and also ooooooooh, that's what was wrong.

So, in excellent-for-me news, I got to go to my friends' house BY MYSELF for a couple of hours.  Ben and I planned that I would meet back home at 9, and we would rent Office Christmas Party on demand in bed at 9:00 with huge plans to be asleep pre-10.  It sounded like the perfect night: wine with girlfriends and then an early movie.

In true MOTY style, I didn't have my phone with me because I am trying this new thing where I don't perform hanging out with my friends for social media, and I just HANG OUT WITH THEM.  Earth-shattering, huh? So I missed the text that said "You don't have to come home or anything but Jack just effing puked."  Oops.

We ended up sort of watching Samantha Bee and Hisan Minhaj instead of our movie and then just as we drifted off to sleep, Harry came in to tell us that jack was puking some more.

Which brings me to my point:  What do you do when your older kids are sick?


When the little kids are sick, they come into bed with us, but Harry and Jack?  They're not so into that.  If they're barfing before bed time, we usually set them up on an air mattress in the toy room (because the floor in there is vinyl), but Jack started the night in his own bed, and it just seemed like such a song and dance to set up the mattress.  When the kids camp in the toy room, Ben usually sleeps on the basement couch, but this time Jack slept on the couch and we stayed in our room.  But that's terrible, yes?  A teeny little 9 year-old all by himself?  I checked on him at like 10:30, and he was just lying on the couch looking terrible not really sleeping.  So, I let him turn on the TV (because I am truly horrible) and then went to bed.  I really think I should have slept on the couch, but you guys!  I am just so freaking tired.  I slept fitfully, though, and ended up checking on him at midnight where I found him sort of dozing in front of Loud House.  He puked again soon after.  Then he ate NOTHING but 4 saltines, a bite of rice, and a sip of soup yesterday and slept most of the day.  Poor little guy.

Cooper, not to be outdone, woke up screaming with a headache at 5:45 on Sunday morning and has been sick ever since.  And Dorothy also has a fever.  Harry is the last man standing, but he's all freaky because he doesn't want to get an effusion (and who can blame him?).

Just what the end of the semester needed:  A house full of sick kids.  GAH.

But!  As the title of this post suggests!  I also want to complain about coats for kids!


Cooper suddenly and dramatically outgrew his fall/spring coat (which is NBD because Dorothy can wear it and has, in fact been wearing the identical 3T number for like a year-- and these coats were Harry and jacks, which is AMAZEBALLS).  Anywho, I went to Lands End, REI, Fontana Sports, Old Navy, and Target and found ABSOLUTELY NOTHING LEFT in his size.  I ended up getting him  the Darth Vader hoodie that is sort of a jacket by mainly just a hoodie and figuring I will revisit the issue in the fall, but DAMN IT.  (Also, it's May now?  So maybe coat weather can be behind us?)

And, Of Course, Pictures 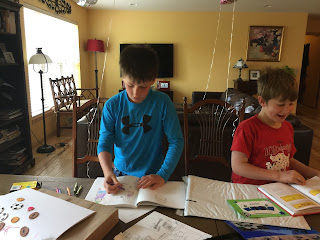 Before the plague.  They are little enough to spend a morning coloring.  Also, those Dollar Store birthday balloons WILL NOT DIE. 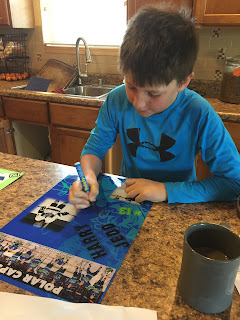 I got some pics together for Harry's 5th grade graduation slide show, and he SIGNED this hockey poster because of course he did. 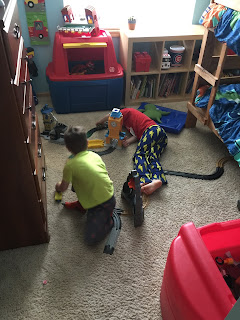 In preparation for our garage sale (FML), we replaced the trains in Cooper's room with Geo Trax, and suddenly everyone loves Geo Trax again. 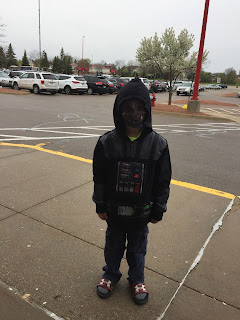 When he saw himself in the mirror in this sweatshirt, he screamed, I LOOK AWESOME! So I guess it's a win.

I have a new Madison Moms Blog Post up About Self-Care.

You can check it out here.

Labels: around the house

We leave our kids in their beds with a big bucket when they are puking. The goal is to get to the toilet (obvs), but only Ebeth can successfully make it there during sleeping hours. I don't think it is terrible to leave big kids unless I am worried it is borderline urgent care/emergency room visit.

I think it's fine to let the Bigs sleep on their own when they're sick. It's not like you were out of the house. We typically let them sleep in their beds or on the playroom daybed with the "puke bucket" (it's a big bowl with handles specially designated for vomit, which is super klassy.) And they get free reign of the TV/tablets. I don't typically let puking kids sleep in my bed because we paid real money for our mattress as opposed to their Costco numbers. Also, I don't like being puked on.
The jacket dilemma! I'm not sure they have them in WI, but maybe check a kids used clothes place like Once Upon A Child. That's where I go when I need off-season stuff. Especially if it may only be needed for a month or two.

Look on eBay for jackets

As for kids and puking, I understand leaving them with a bucket but do check on them a few times. My parents and I still argue about their leaving me to fend for myself one night when I was terribly sick. I left my bed and slept on the hallway floor. I was so sick that I couldn't make it to the toilet (and they didn't leave me a bucket) so I just puked all over the carpet every time. To this day, my POV is that I was so sick that I was too weak to do anything more than roll one way to puke and roll the other way to sleep fitfully. My parents still bitch about how I "just puked all over the carpet."