But first!  You should probably enter my giveaway because it's a good one!

Ok, so, the only way I can get out of bed in the morning is to know that there is a hot pot of coffee waiting for me in the kitchen.  When I am cleaning up dinner, I always measure the next day's coffee and clean out the pot and pour new water in the machine and set the delay brew timer to start 10 minutes before my alarm will be going off.  Usually, I rinse out the pot and then wedge it on the little shelf under the water dispenser in the fridge door to fill while I dump out the old coffee and refill the basket with new coffee.  Last night, though, I rinsed the pot and filled the basket and THEN stuck the pot in the fridge door to fill.  This was out of my usual order, so I promptly forgot all the hell about the filling pot and went to shake out the laundry room rugs and sweep the floor in there, assuming that I was done making coffe. I didn't think about the coffee pot again until Ben came upstairs with an armload of dishes from the family room (kids are gross) and noticed the flood on his way to the dishwasher.  Ooops.  I pulled a couple of bath towels out of the hamper to wipe up the water and tried to convince myself that I didn't need to move the fridge to dry under it, even though I knew I did.  Just as I got the thing pulled out from the wall and was marveling at the gross wet mess under it, our fire alarms started going off.  I wasn't super surprised because they are really sensitive and I had just blown out my mother's day "Fankee Candle" from Cooper.  Beatrix started barking like crazy, like she always does when the alarm goes off which is so helpful in the middle of terrible high-pitched beeping-- but it probably hurts her ears way more than it hurts mine. The kids were all agitated, too, running around and screaming that they couldn't find any smoke-- also SO HELPFUL.  I can't reach the alarms, so I just kept wiping up water while the kids keened and the dog yelped and Ben ran around testing all the alarms to try to get them to stop the incessant noise.  They'd turn off for a second-- about 6 seconds, actually-- but then they'd blare back on again, and the kids and dog would erupt.  Finally we called the police non emergency number, and the dispatcher told us it was probably carbon monoxide, and we should get outside and wait for the fire department.  The windows were open, so I decided to risk it and keep cleaning up, but Ben herded the kids outside.  About 2 seconds after he hung up the phone, I heard the sirens and realized I had zero extra floor mopping time, so I shoved the dog into the backyard and joined the kids on the lawn, half touched/half annoyed to see they all brought their current favorite things.  The firefighters were in full gear with axes and carbon mo meters, and it took them 30 minutes to diagnose our problem while the kids and I milled around in the yard and hung out in the van and I tried not to kill them because they were all keyed up and anxious no matter how many times I pointed out that WE WERE ALL FINE.  Ben helped the rescue team OF COURSE HE DID and even though I mocked, it was actually a good thing because he was the one who found the misfiring smoke detector.  It was the one in the toy room, directly underneath the fridge.  The one that was DRIPPING WATER onto the toy room floor.  Um.  Ooops.  My bad. 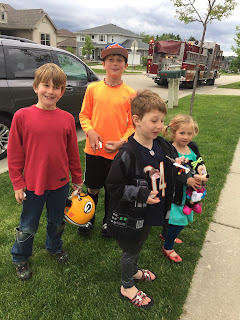 We never thought that the 2 events-- the flood and the beeping-- were connected even though they happened at the exact same time.  Because we're idiots, both of us. But mostly me, obvi.
Posted by Sarah at 2:40 PM

I'm so sorry, but this is hilarious. The only thing better would be a subsequent anonymous call on Beatrix's behalf because you left her in the backyard, causing emotional trauma