Calling, texting, faxing my congressional reps, of course.  Also the justice department, which I did this morning even though I have ZERO faith that they will listen.  But I sent a message as Dorothy and I sat in the hallway outside her preschool classroom because we were early (Ha!  THAT NEVER HAPPENS.  resistance is everywhere even when it looks like a chubby suburban mom taking selfies with her beach-day-clad preschooler.  In fact, that whole experience made me feel feminist AF. 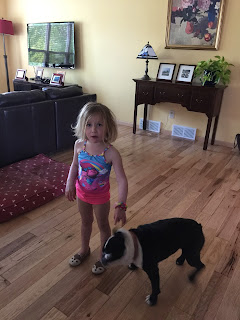 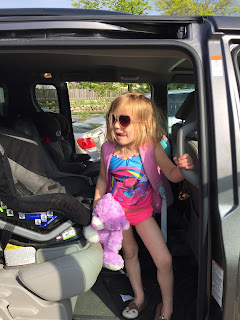 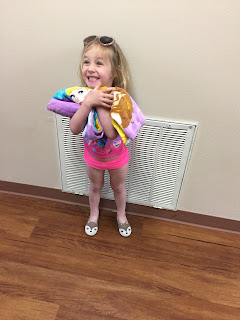 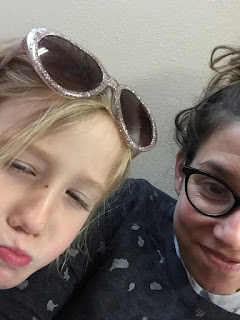 You know what?  Most kids DID wear clothes over their swimsuits, actually.

So, okay.  I can't fix politics, but I can fix my family budget, right?  So not only am I tuning to my own eating with renewed fervor, but I am also trying to reign in the grocery spending.  We have been doing this thing where we do not go back to the store all week even if we run out of something.  It's only been 2 weeks, but our cupboards are getting bare because we are eating the freezer and pantry stashes that have been neglected.  Bare is the wrong word.  The cabinets and freezers are pretty stuffed still, but our extra supplies of our favorite foods are running low. There are only 4 boxes of mac and cheese in the cabinet, and there were like 8, for example.  And someone ate all of the cookies, even that pack that was hidden under some rice and now they are marching steadily through graham crackers that haven't been open the entire 6 months we've had them.

Like, we probably need more milk before Friday because we only have 3/4 of a gallon left, but instead of swinging by the store to get it, I made scrambled eggs and toaster waffles and sausage (from  along neglected Costco-sized box in the downstairs freezer) for breakfast (with fruit-- I am not a monster) and served everyone orange juice.  I am out of my favorite salad dressing, so I have used most of the balsamic vinegar.  We're down to our last pack of bagels and we usually have dozens.  There are no more frozen pizzas.  You get the idea.  So.  Here's my question:  Do you think it will be cheaper in the long run to grocery shop once and be done and just be creative when we run out, or will we spend so much stocking back-ups of extra faves in addition to buying the enormous haul of stuff we eat every week normally that I might as well go get some milk?  It is important to note that no one is going hungry in this equation-- we are just eating things we might not eat if we had infinite options.  Harry, for example, doesn't really like toaster waffles, but he made do.  Any thoughts on reigning in grocery spending?
Posted by Sarah at 10:05 AM

I "shop from my pantry" all the time. The freezer too. I hate wasting food so I try to be diligent about using what I have, so when I plan the menus for the week it's usually a mix of new stuff and what I already have on hand. It works pretty well. I try to buy more perishables than I think we'll need (milk, fruit, bread etc) so I don't have to go back to the store mid week. Sometimes I nail it, sometimes I miss the mark and have to pick up milk. But if they eat all the good snacks/bagels/etc in the first part of the week, oh well. That way food doesn't languish too long and the kids learn that their food whims are a luxury I don't always indulge (like, we live in a poor part of a poor state --thanks, academic job market!-- and 3/4 of the kids in their school are on free or reduced price breakfast and lunch programs. If my kids have to take an apple instead of strawberries, or eat Cheerios instead of a more fun cereal, they will be just fine.) Damn, I sound sanctimonious. But really I'm just cheap and lazy and want to teach them that "making do" in a well stocked kitchen is a chance to be creative.