If you are reading this, I made it.

I survived 60+ hours without Ben and lived to tell the tale. (I know that Amy, whose husband works out of state part of every week, and Sarah, whose husband takes long trips occasionally, and Kate, who was on her own with 3 little kids with an out-of-state husband for months, and Jamie, whose husband is in the army and was deployed when she gave birth to their second son all probably just rolled their eyes so hard their heads hurt).

But seriously, people. I am part of a parenting team, and I am not meant to be a solo act. We're like Siegfried and Roy, and when I am left alone, the TIGERS MAUL THE SHIT OUT OF ME.

Speaking of? Where has Ben been since Wednesday, you might ask? VEGAS. For work? NO.

I started off strong and optimistic when he left. We had a great morning at the gym, and Harry's swim teacher moved him up to the next level (he's a Ray now!). I took the boys to campus to walk around the lake, and we had lunch at the student center cafeteria. They LOVE cafeterias. Nothing is more exciting to them than piling random food on a tray.

Harry chose a yogurt, a yogurt parfait, a yogurt smoothie to drink, and some Cheetos. 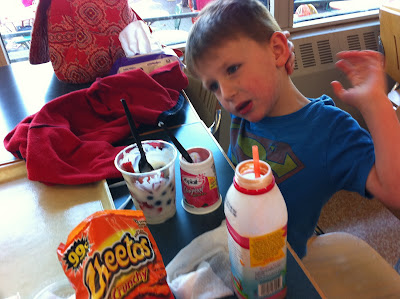 Jack was trying to fit in with the college kids and snagged a slice of pizza and a milk. 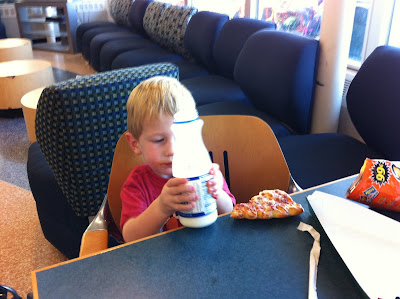 They both ate cupcakes in their stroller while I sweated my ass off pushing them around the lake. 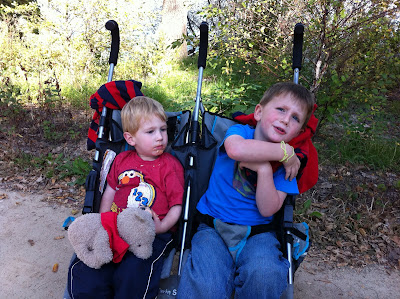 After that, shit pretty much fell apart. Around 3:00, I was minding my own business cleaning the toilet, and Harry came running into the bathroom sobbing that his ear hurt and he needed to go to the doctor. I was like, "Are you bored or something, dude? I'll play with you." He was all, "Yeah, sure. We can play. AFTER I GO TO THE DOCTOR."

I called our doctor's office, and while I was waiting on a call back from the nurse, Harry slugged Jack in the face, and Jack bit a hole in Harry's finger. The nurse told us to come right in (I love her!), and 20 minutes later, our doctor was giving Harry Tylenol and calling in an amoxicillin prescription.

I thought things had calmed down, but as I was cleaning up dinner, Harry asked to take a shower, and I said, "Nah, let's just do a bath," and he went apeshit crazy and SCREAMED for the next 2 straight hours. Ask Ben-- I called him at the Mirage and made sure he could hear every minute of it, too. (I also might have asked him to come home).

Of course, H didn't sleep at all Wednesday night, and you know where he did all that not-sleeping? Yep. With me.

Thursday, they went to school where Harry (thanks to a birthday pinata of one of his classmates) discovered his love of Silly Bandz.

Friday, we killed a good hour roaming Target and buying a ton of stuff we didn't need. Like all these Silly Bandz. (50. He is wearing 50 on his wrist). 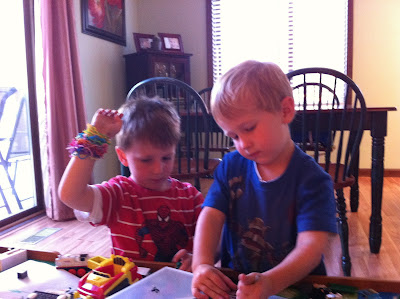 And the ingredients for iCarly's favorite dish, spaghetti tacos. 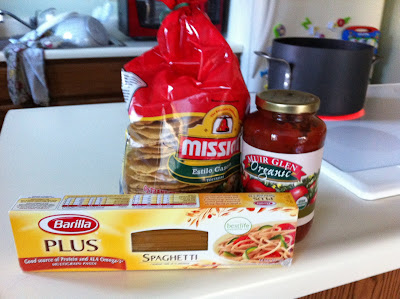 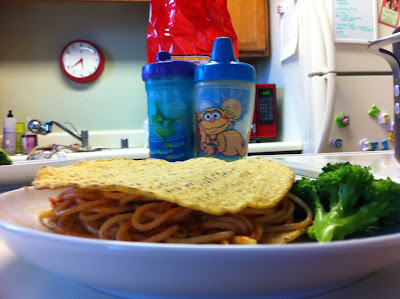 Which I did not eat because who the hell eats that crap? 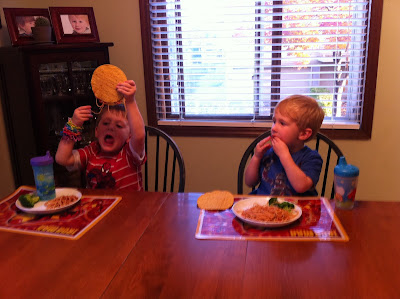 We also had a VICP (very important craft project). Harry missed his religious ed. class last week, and all the kids decorated tin cans to gift to classroom visitors this week-- they're supposed to be pencil holders. Jack made one, too, for Ben. The kids take their gluing very seriously. 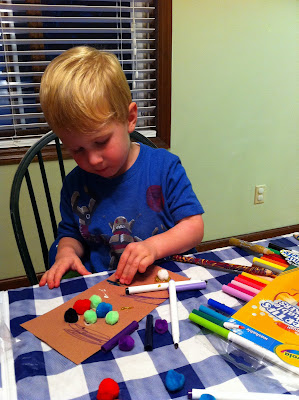 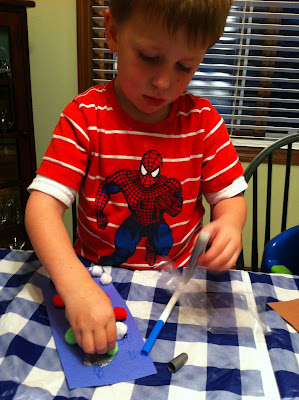 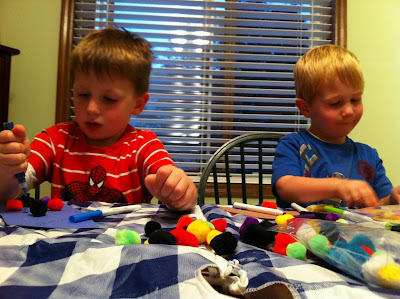 Beautiful, huh? Almost makes me wish I didn't live in the digital age and still used pencils. Or pens. I just use my fingers. Ha! 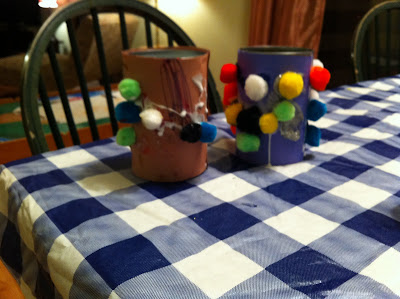 I wonder if my super picky eater would eat spaghetti tacos? He does love iCarly!

I loved the action shot of the craft project!! Hope you're having a great time at the spa!

We are the same way - parenting team. If Lucas works late, it's ridiculous around here. I NEED him home at 6:15 every night. We are so lucky, I know, but still... I hear you.
Glad you made it :)

The tigers tried to maul me during our little foray into single parenting too. They would have won if not for preschool.

Love the school cafeteria. Wow, that's a lot of yogurt!

okay, your husband goes away for a few days and you get a spa day? I am so jealous of that deal! With all the time I've been alone parenting I'm owed approximately 3 weeks at the spa!

Good for you for hanging in and handling it all by yourself without resorting to tv all day and crackers for dinner! Not that I do that, ahem.

a TWO hour massage?! OMG, did time just melt away to nothing?! oh my.

That Sigfried and Roy line? Hilarious.

It sucks when Husband is away for 12 days, but after about hour 60, I go almost completely on auto-pilot and the next 228 hours go by like the first 60. But with more wine.

I do about 90% of the parenting, but still hate the days when AJU1 isn't home to play with the kids for even 10 minutes. I am really not looking forward to an upcoming roughly 10 day trip of his... I might need lots of chocolate then!