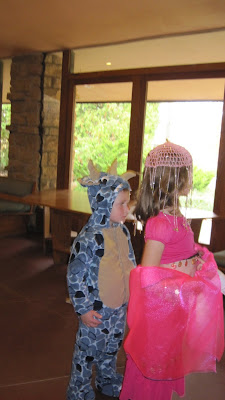 Jack did not want to even go to church, much less wear his costume. So. Yes. I am the monster who leaves her screaming baby at the nursery. Harry walked so slowly in the costume parade that he actually got lost and came shuffling back into the auditorium (when the rest of the parade went outside to get to the nursery school wing of the building.) Harry. He is never in a hurry. 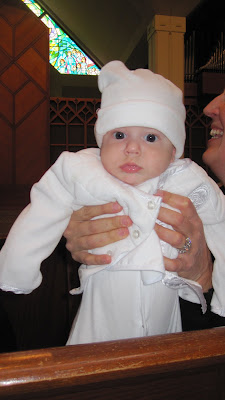 I was mildly afraid that someone was going to try to go swimming in the holy water hot tub, but they all just blessed the baby, which was pretty cute. Also pretty wet. 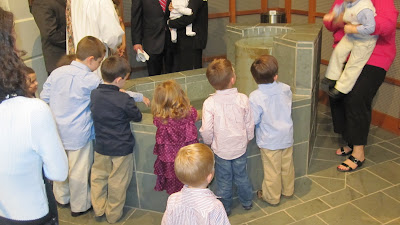 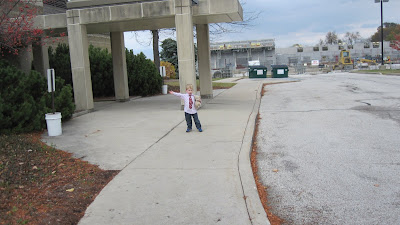 We checked out the cute preschool wing where the kids had construction paper witches, ghosts, and Frankensteins on the wall. For a minute, it made me wish my kids made "normal" art at school. Since it's an art-based school, they do really elaborate projects-- and call them installations-- and have trained art teachers and don't really go for the everybody-follow-directions-and-cut-the-same-stuff-out philosophy. But damn those typical school crafts are cute. Maybe we'll make them at home this week.

I brought a along a purse full of candy, and the kids devoured it. They spent most of the ceremony engaging in some grandparent-approved pew hijinks. 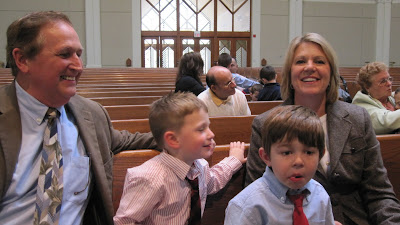 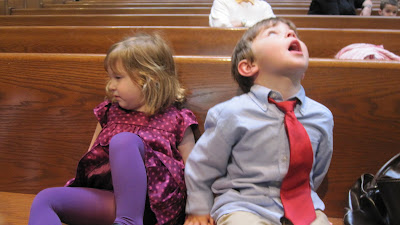 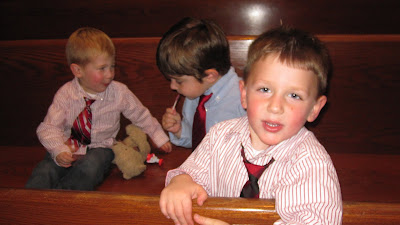 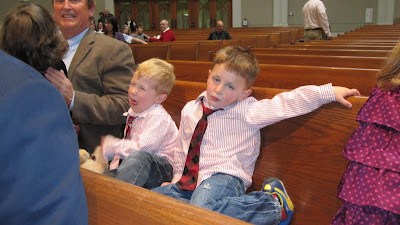 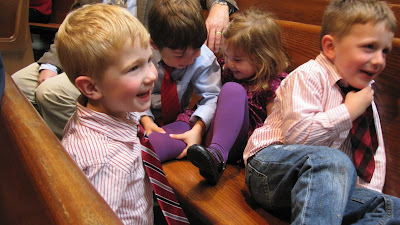 Check this out: Ben's dad is covered up in kids 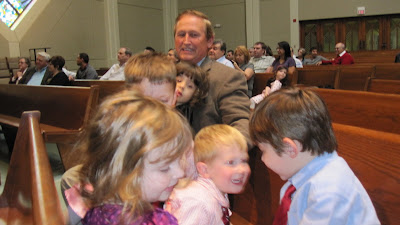 On my exploration of the church with Jack, I stumbled upon an entire table full of pro-life abortion literature, including some pamphlets for a campaign I am writing an article about. It was seriously my lucky day. I didn't have my bag when Jack and I were walking, so I just snapped a furtive picture of some bumper stickers. 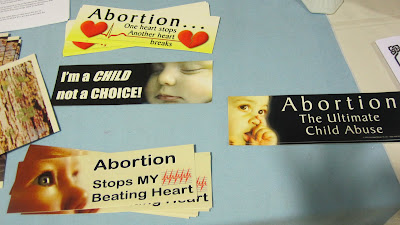 Then when we were leaving, I ducked back inside and filled my bag with one of everything on the table. You should have seen the quizzical looks I got from fellow church-goers. Maybe this was just the inspiration I needed to get my scholarly shit back together.
On the ride home, both boys ate Halloween treats from their grandparents. 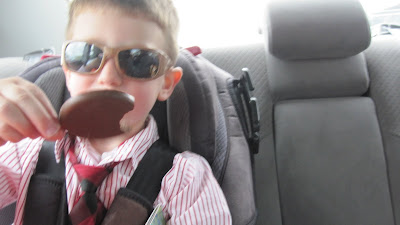 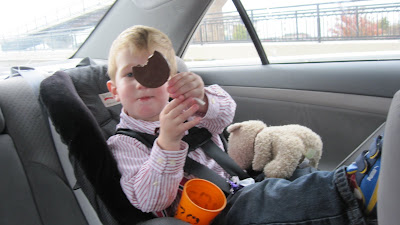 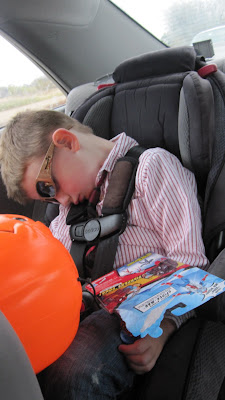 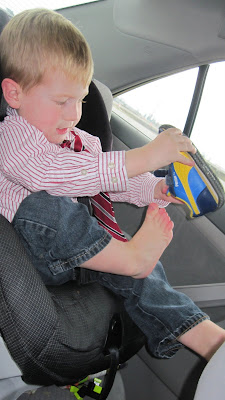 And spent the next 2 hours removing lint from between his toes. 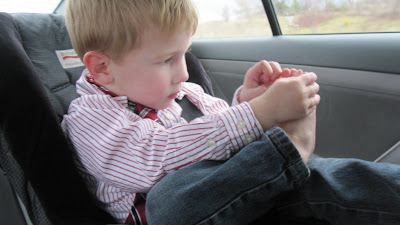 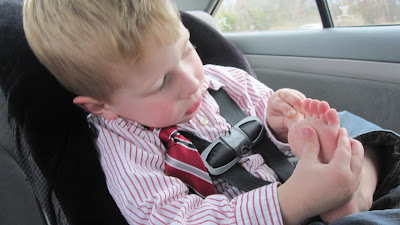 He was pretty intense about it. Maybe it is his spiritual practice. Who am I to judge?
Posted by Sarah at 10:03 AM

I would really like our next child to be a boy so I can dress him in ties daily!

I love the pictures of Ben's parents with all the grandkids. It's so fun to see our parents when they're surrounded by their grandkids (mainly because that means that Evan and I are probably headed out the door fast as lightening while no one's looking).

I truly hope that that inspired you to bring back the writing because seriously nothing is more offensive to me than judging others in the name of Jesus. The hypocrisy slays me.

2 things, anonymous, if you are claiming that I am judgmental:

1. These pamphlets are not necessarily religious-- some make life-based arguments that specifically endorse Judeo-Christian and Christian gods, but some of the do not.

2. I am not "judging" in a kind of colloquial way. I am very interested in studying pro-life rhetoric-- how arguments against abortion are formed, supported, and circulated-- in a way that has very little to do with my own feelings on the subject. The particular campaign I am investigating uses Planned Parenthood literature from the 1940s to argue that mainstream birth control organizations have always been about genocide. The fascinating thing is that PP was, in fact, a racist org in the 1930s, 1940s, and even into the 1950s. This particular campaign is quoting actual PP material to make its case, and PP has not really figured out what to do about it. I was exited to find an actual pamphlet for the campaign in the flesh, instead of just online.

If you mean the pro-life stuff is judgmental-- I am not sure it is in the way you're classifying it. The judgment rests on the sanctity of life argument, and if you unpack pro-choice rhetoric, that's what they're responding to as well. For awhile orgs like PP went on the offense and tried to re-figure the terms of the debate, but most of the time they respond to charges that pro-choice rhetoric is morally bankrupt.

The rhetoric in these pamphlets is much more complex than protest placards, and I think it's fascinating to think systematically about it.

Such a cute nephew! I love that the kids all got involved in the baptism. So sweet! And I love the way your kids wear ties too.

I don't think anonymous was saying that you are judgemental.

I think the comment meant, "At church, of all places, people shouldn't invoke religious beliefs as a reason to judge others." The judging would be by the authors of the phamples who imply that if you choose abortion, it is against religion/God/Christ, whomever. I can only draw that conclusion because of their placement in a church.

I think the comment was actually in support of you, not a criticism. The reference to judgemental was toward others, not you.

Don't even get me started about abortion...I heard that my 3 teenage girls were taught in Sunday School that abortion was killing babies. I came un-glued! And the women who said these things are my friends....It actually led to a really good conversation with my girls, but I was still pissed that it was even brought up in church and framed in a religious context.

Yeah, Wendy, I think you're right.

I realized that midway through my reply, but then I kept going.

I am finding myself in the awkward spot of defending pro-life rhetoric b/c it is much maligned by pro-choice supporters, but it works-- and I want to know why and how it works and for whom.

First off Sarah it is I the "Know it All" who wrote the anonymous thing. I just hate that people use religion as a way to judge and to say that everything they use from a rhetorical perspective or otherwise is okay because they love Jesus. It's not okay and I'm sorry I am not a bad person for honoring a woman's right to choose. I actually had someone at my desk the other day describe a "baby killer." I finally confessed that I might fall into that category having worked at PP in a former life. They were mortified and stopped it right there. The bottom line is that no one loves abortion no one thinks wow, what a great idea. It is hard and nothing that I as a pro-choice person take lightly at all. I just don't think that anyone should die for having become pregnant and having an illegal abortion and I don't think that I can ever try to tell a woman in a position with an unwanted pregnancy how to handle it. Thats it, so write about it, get the feelings out there.

I love the concentration with which Jack picks his feet. Podiatry school in the future? Jacob is so cute! What a little doll.

i just wrote a big long rambling diatribe about the abortion pamphlets but I deleted it because it was big, long and rambly. I feel better now, but you don't have to read it! Win-win!! :-)