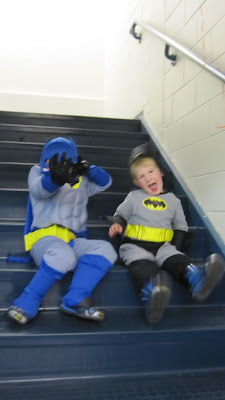 I bought a Jack a fluffy baby dinosaur costume from Gymboree the day I ordered Harry's no-longer-a-cute-little-baby Batman costume online. I was so bummed at the years of not-cuet costumes stretching before me that I packed Jack into the car and set out to find a Halloween get-up that would make him look like a living stuffed animal for one more year.

When we got home and tried on the costume, I noticed that the sleeves were a little short. Last year, Jack had to be a last-minute hand-me-down monkey because he outgrew his Woody costume between its purchase and the big day, so I ordered an extra dinosaur costume in the next size up, just in case the same thing happened this year.

The costumes came; Harry and Jack modeled Batman and a fluffy dinosaur respectively, and all was good.

Then, last week, the boys' preschool sent a note home reminding us of the Halloween parade next week and telling us that costumes with masks were prohibited because some kids are scared of masks. Harry freaked the freak out because his Batman costume, as you can see, has a mask. 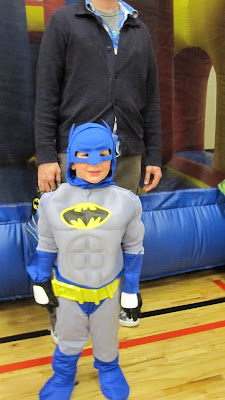 I pulled out the bigger Gymbo dinosaur, and he tried it on. It's a little tight, which is awesome, and Harry gets red and sweaty really easily, so he was flushed within seconds-- also awesome in a funny/cute way. Jack tried his costume on, and I had 2 living plush doll children. It was great.
Until last night, when we were getting ready to get ready for a family Halloween party at the YMCA. Ben suggested that we each dress as a member of the Village People which would have been fantastic, but Harry wanted to wear his Batman costume. So Jack demanded, "Me be Batman too," and maybe it was his correct use of verbage, but being the wasteful sucker I sometimes am, I ran out and got him a teeny Batman costume, too.
Voila! Two small Batmen 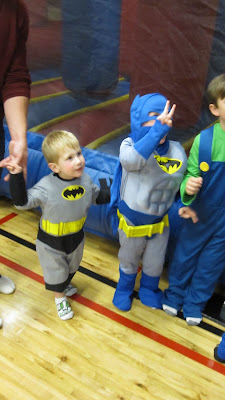 Harry and Jack spent the whole night in line for the bouncy house--they bounced themselves silly and then ran to the end of the line to bounce again. 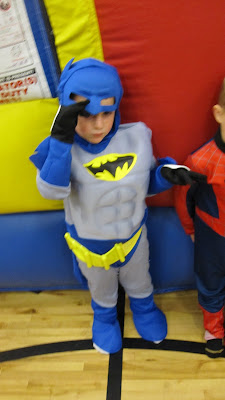 Except Jack couldn't go by himself, so my brother "had" to bounce with him (he said it smelled in there, but we think he secretly loved it). 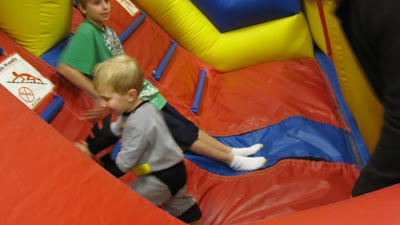 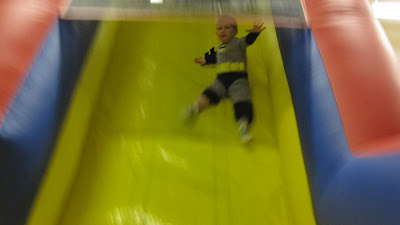 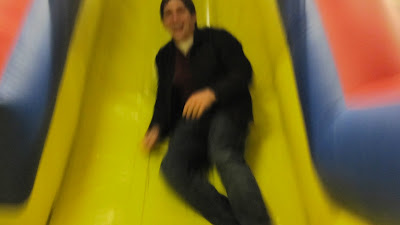 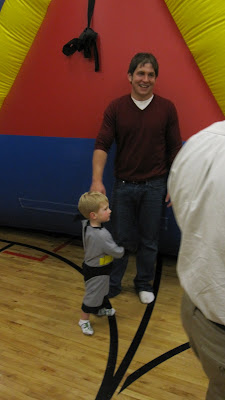 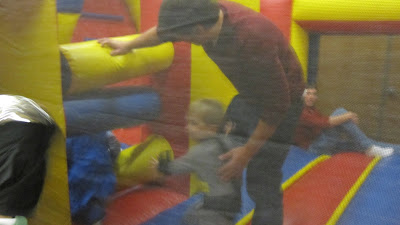 Every time I thought I misplaced Harry, I'd find him in line for the bouncy 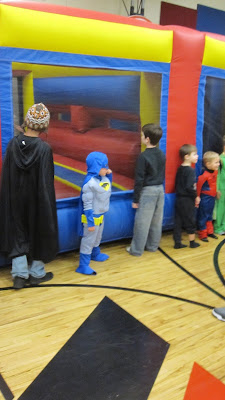 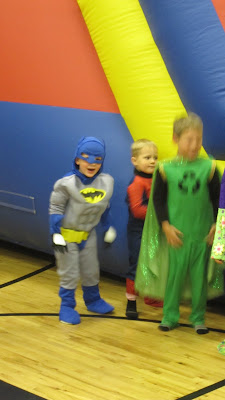 That's also where we could find Ben 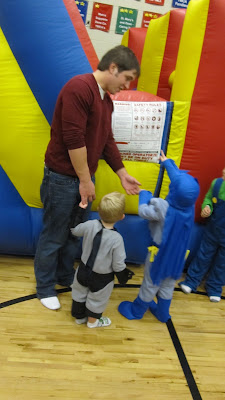 Ben and I are both sick as hell with a terrible cold that the boys probably gave us. Look at me-- I have on eye makeup but you can't see it because the skin around my eyes puffed up and ate it. Poor Ben has to judge a speech tournament today-- he weakly dialed and texted all night looking for a replacement, but no dice. And we have to take the kids to a costume parade at church tonight (on a side note: it feels so wrong to me to call it church because that term denotes Christianity. Many UU congregations reject the church label because it is exclusive, but there's not another good, generic word to use. People in our society (that's what it's called technically here) say "the meeting house," so I guess I could use that term). Anyway, we're sick and here we are: 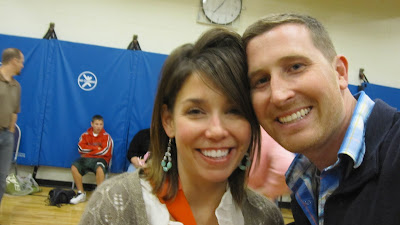 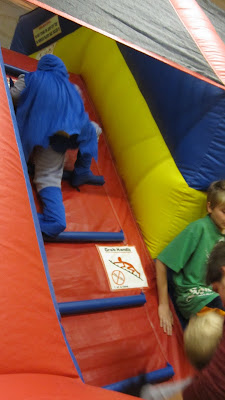 They even got to wear their Batman wellies. 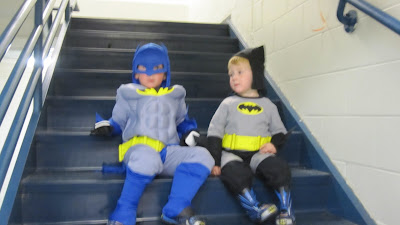 The party ended with a kiddie magician. He was funny, and the kids all were amazed and screamed and laughed and cheered-- a great show. The only problem? The other adults! A very large man with a very large wet cough hacked all over Ben's shoulder and neck, and the large man's large son was practically on Ben's lap by the end of the show. Then some lady came and crouched practically on top of me, holding an orange balloon that she must have stolen from the stairwell (WTF lady?) right in front of my damn head. Here I am making my best WTF? face: 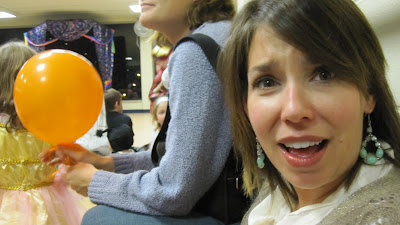 Here you see Jack beginning to lose his shit because he wanted a lollipop and all I had was a box of raisins (also it was 8, and he goes to bed at 7 and here we were all dressed up and far from the bathtub anhour after the routine should have commenced) 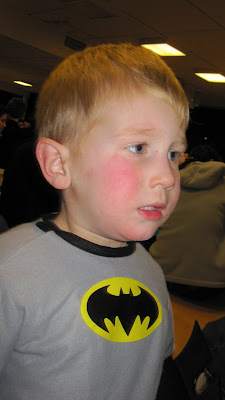 Harry and Jack, though, loved the show and sat nicely together in front for at last most of the time 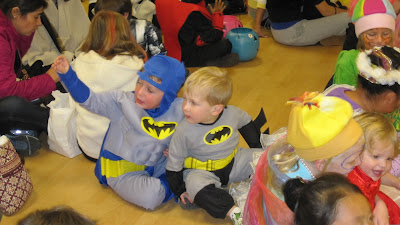 I'll keep you posted-- I should have pictures of some fluffy dinosaurs at the UU parade tonight.
Posted by Sarah at 8:21 AM

I am sure this is the last year I'll get to choose what Julia is for Halloween. Which will make me sad. But, since Batman is the best comic book hero (and I'll fight anyone who even tries to say that isn't true), they are adorable as Batmen.

And? Evan and I are totally judging speech tournaments out here!!! We're both way more excited about it than we probably should be.

I cannot tell you how jealous I am that their schools allow Halloween reveling; Ethan's preschool is one of those "we don't let the kids dress up b/c Halloween isn't a holiday everyone approves of and it doesn't represent all of our values." It is the ONE thing about the school that I absolutely can't stand. Every school I taught at from the year 2000 on, public and private, had the same policy, so I am seriously missing Halloween parades; I hope whatever school he goes to next throws kick-ass halloween parties.

Sorry you're sick! I hope you coughed on weird personal-space-issues woman. that face you're making is priceless!

I think the two little batmans are awesome. Maybe next year Jack will get his 6-pack batman costume and then they'll just be so cute as twin batmans that you won't miss the giant stuffed animal look anymore. :-)

Two superheroes here. No stuffed animals. Harry and Jack are so cute in ALL of their costumes. What fun!! I need to get cracking on ours.

Sorry you are sick! Way to make it a great Halloween anyway!

I desperately need to see fluffy animal costumes! We were shopping for costumes this week and there was a purple fluffy dinosaur costume at Marshall's that I want for Sophie SO MUCH!!!! but she already has a princess dress so i didn't want to spend the money. but OMG she would look SO CUTE in that costume and I'm running out of years to choose their costumes! I probably only have one more for Sophie, maybe two - the other kids are already demanding what they want to be. Oh, I don't know. I may have to sneak over there and get it anyway. Purple fluffy babies!!!

I am lucky -- Jack honestly doesn't care what he is going to be. I got him a shark costume from Old Navy for like $17 on sale -- score! Emmie is going to be an Old Navy butterfly. Maeve gets the hand-me-down pumpkin both kids already wore their first year.

Sorry about your colds -- both Josh and I have been hacking up a lung for the last week. It's superfun.

THey look cute in their costumes. We aren't dressing up this year - although AJU5 will probably wear a "princess" dress like she does almost every Sunday (and any other day I let her) and will have her "wand" with her...