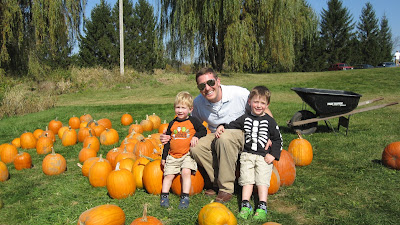 Ben took Harry and Jack to the pumpkin patch while I was at the spa (what kind of a selfish mother goes to the SPA and misses out on family pumpkin patch day?? The one who went to a patch LAST weekend and has plans to go to another one THIS coming weekend. So I missed the trip where they actually selected our pumpkins? Hmmm...I doth protest too much, uh?)
They picked 80 pounds of pumpkin. 80 pounds, 10 pumpkins. 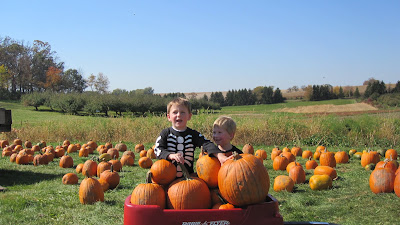 Ben couldn't resist-- they were so happy rolling gourds. 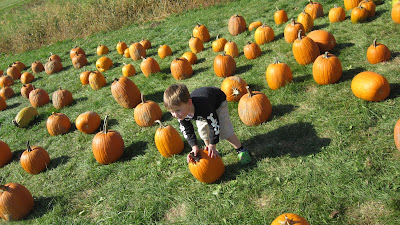 He even took their pictures on this rickety wagon, where we've been sapping pumpkin pictures for 4 years 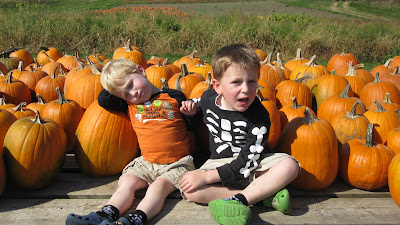 Speaking of! Let's go down pumpkin memory lane, what do you say? 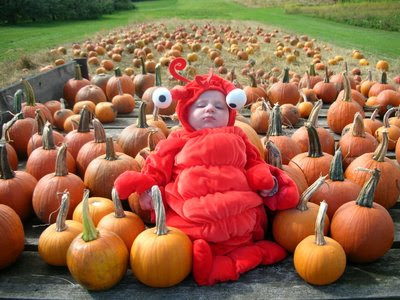 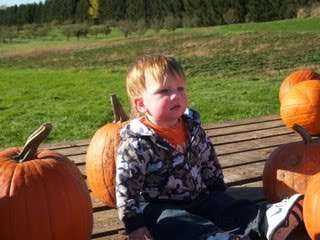 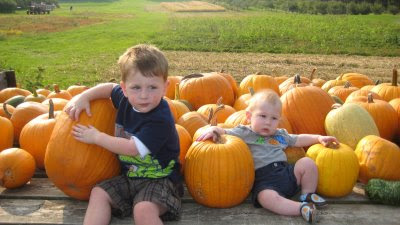 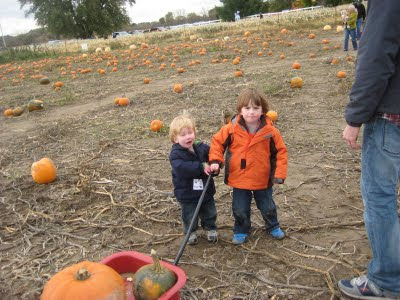 Cementing his reputation as BEST FUNNEST PARENT EVER, Ben also took the kids to Petsmart for a teeny aquarium and some teeny fish. Jack's is the yellow one named Bear, and Harry's in the orange one, iCarly. 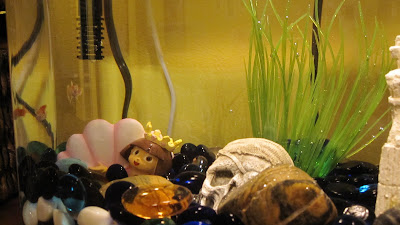 This morning, Harry woke up asking if his fish were dead yet. I said no, and he said, "Good. Today is not the day." He's so creepy sometimes. Probably just because he's getting into the Halloween spirit. 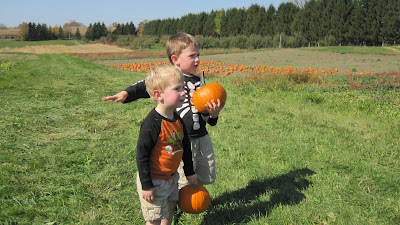 Love your trip down memory lane. We had an experience with a teeny aquarium once. As Harry put it, it ends badly :) So cute Sarah!

Love love love the retrospective!! We do that with a firetruck on 4th of July. So fun. We have been to the pumpkin patch twice (it's in the parking lot of our church/preschool so we're already there like four times a week) and I NEVER have my camera!

That totally looks like a drowning Dora in the tank!

We are fired up for the patch this weekend -- the kids are very excited to see Harry and Jack again. And I am beyond excited to see you! Josh hates the pumpkin patch, so beware the crabass...

those kids get cuter by the year, although they were adorable to start...only and great grandma would rave so.

I'm sorry, is that Dora the Explorer aquarium decor? Fabulous.

Loved that walk down memory lane! They are preshusssss!

is the 2006 picture a lobster costume? Cute

I love the "today is not the day." So funny

And they got lots of pumpkin! I like a friend's rule - each kid picks a pumpkin, but they have to be able to get it to the checkout. Makes it so much easier to transport!