We finally carved some pumpkins 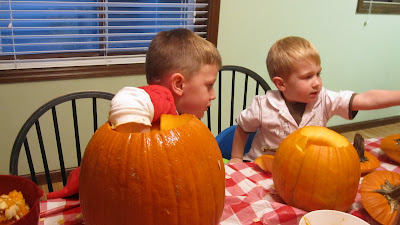 Jack was just really into the lids. 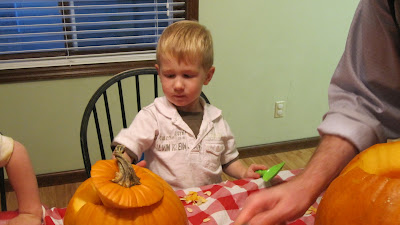 In the time it took me to carve one measly face, Ben carved 3. 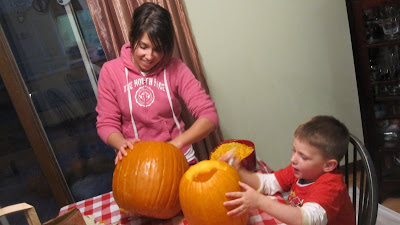 Harry was Buddy the freaking Elf-- he was THAT excited about carving pumpkins. 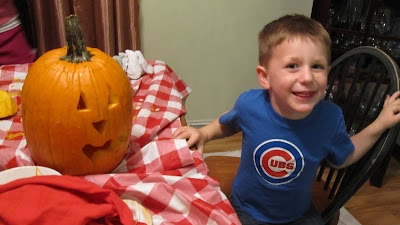 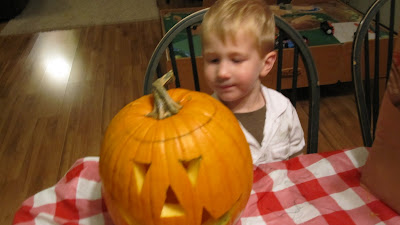 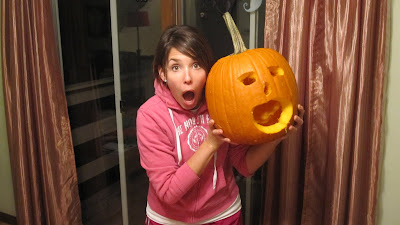 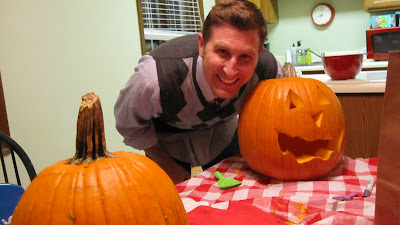 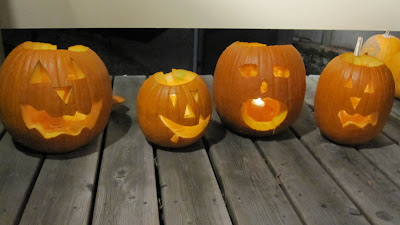 In other random news, today was Jack's first day of school sans Pooh Bear, and it went really well. Harry has his first boy-band infatuation-- he just can't get enough of Big Time Rush on his iPod, which he insists on playing every time we get in the car. Except for this morning on the way to school when I couldn't take it anymore and played the Beatles instead. Harry walked into the building tonelessly bleating "Lucy in the Sky with Diamonds," making everyone we passed giggle. Seriously, he was better than a cup of coffee this morning.
Posted by Sarah at 8:28 PM

Carving pumpkins is my absolute favorite fall activity. We are doing it this weekend.

I enjoy Harry's Cubs shirt. I think Evan needs one.

Currently, Julia's going to turn back into a baby when she gets bigger. She wants to be like her doll, Purple Baby (who is, in fact, dressed in purple).

We're doing pumpkins this weekend too, I hope! We were going to do it last weekend but The Wall took over. Thanks for the reminder.

I love how many pumpkins you guys have. I bet your porch looks so cool when it's all lit up!!

Your pumpkins look great. I laughed out loud when I read Buddy the Elf because my girls requested to watch ELF on our roadtrip last weekend. And so it begins....

Loved the coffee line....you got a gift with words Sarah!

What a cute pumpkin family!

I am not adventurous enough to cut pumpkins, but I am hoping AJU5 will decorate our four mini ones with permanent marker this weekend.

I seriously love that Ben carves pumpkins in a tie and sweater vest.

Watch out with that putting on the Beatles when you can't take any more of the kids' music. That's how I ended up w/ the Beatles obsessed 4 year old.

We'll be carving pumpkins this weekend; can't wait! I hope Ethan displays the same Buddy-the-Elf-esque glee that Harry did!