OMG-- Chipotle is the best!

This is like really insignificant breaking news here, people. (Except not because I am pretty sure this news is at least 6 months old). Chipotle has an adorable kids' menu!

The reason I am only just this minute discovering the make-your-own taco kit that the chain now offers is that Harry has always HATED Chipotle, so the only one I ever go to is the one on campus (where Ben and I often have lunch dates), and they're not into advertising a kids' menu because there are no children there ever.

But I digress. Not only does Chipotle have organic milk boxes and serve pork and chicken that's farmed humanely, it also has an adorable kids' menu with several options (including the cheese quesadilla we should have gotten for Jack since he actually hated his tacos). Harry had the best time ever with the make-your-own taco kit. He was good and quiet and he ACTUALLY ATE HIS DINNER.
I have proof: 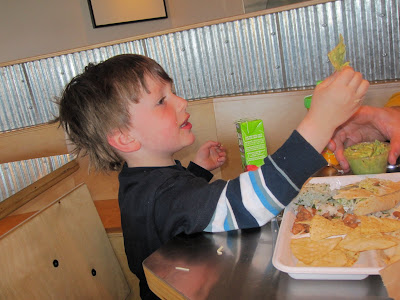 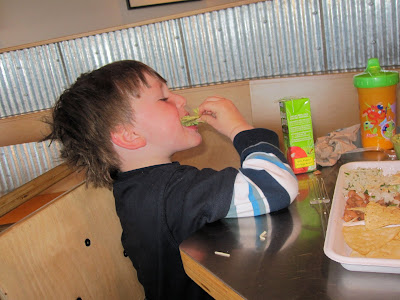 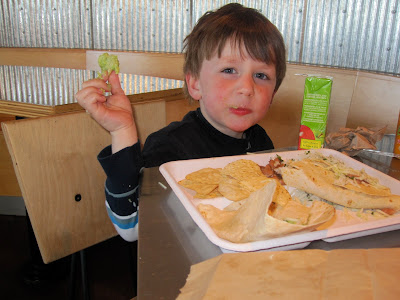 Jack though? Was a huge pain in the ass. He wanted to drink his juice from the little ledge on the back of the booth, refused a high chair even though he's not booth material just yet and kept kissing Ben's hands (which was actually really cute). He ate not one single bite of his meal (don't be fooled by the pics), but he seemed to have fun. 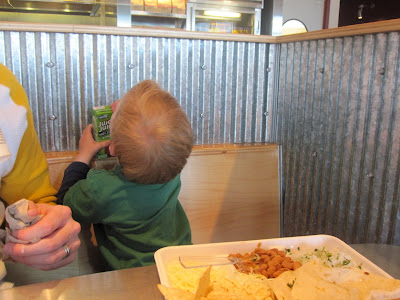 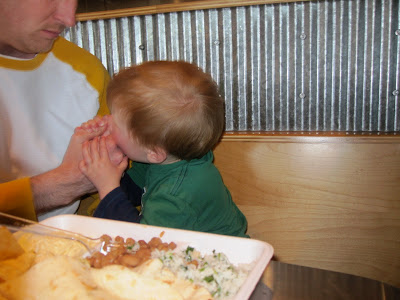 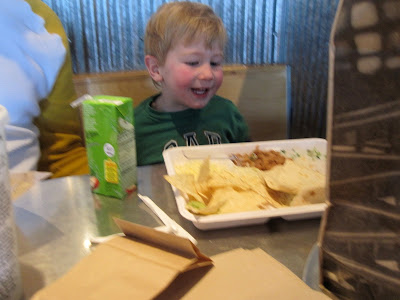 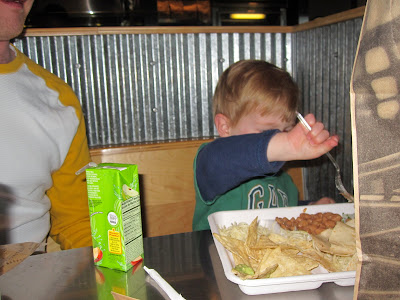 Also, they serve beer and margaritas, and all of us ate tons of food for only $30. And it was fairly healthy food. I LOVE the salad with chicken and salsa in lieu of dressing (under 400 calories without sour cream, beans or cheese. So basically just lettuce and chicken in a bowl, but still delicious).

Random, I know, but I was so happy with this post-grocery, pre-Target dinner spot, I wanted to share.
Posted by Sarah at 10:09 AM

We can never eat enough Chipotle. Last summer we discovered Panara, their amazing organic choices for the kiddos, and a primo Americano (room for cream, to go - ya never know with this age of dinner companions!).

I actually read something about the owner of Chipotle wanting to support local farms and right at this moment I can't remember the details. I think they are big into buying locally (which is awesome) and, like you say, meat that isn't all hopped up on goofballs. I wish I liked it better for those reasons,but sadly, I have never had a successful meal there. :(

I'm not giving up... I love to support smart organic people! lol :)

We eat Chipotle at least once a week, but ours does not have the kids menu. I saw it for the first time in AZ!

I wonder if my super picky eater would make his own taco. Probably not because it would involve a tortilla and cheese, neither of which he eats!

One just opened near us, so we'll have to check it out! Sam and I love any place that sells burritos!

I'm a friend of Beth's. LOVE reading your blog! :)
We too love our Brookfield Chipotle - Sunday night ritual. They serve beer for hubby, great kids' meals, and cheap!

I didn't know they had those kids meals! We'll have to check them out.

I love Chipotle, but the sodium content is INSANE and the next day I am bloated up like a cartoon character. But every once in awhile it is so worth it.