Misty pointed out that this month is poetry month-- NaPoWriMo or something like that. (Except actually not like that because that's ugly and poets want to cut themselves when they see ugly language unless they're trying to evoke ugly, like, you know, when they are writing about cutting themselves.)

I want to try my hand at poetry this month, but I realized it had been 10 years since I have written creatively. 10 years of scholarly writing. 10 years which have done their best to suck the creativity from my body and replace it with previews, signposts, and end notes. Still, I have been carrying my journal with me everywhere, hoping the impulse to burst into poem will come upon me, but so far no muse, just shopping lists and to-do's that never seem to get crossed off, especially in April, which is academia's cruelest month for sure.

Something else it's been 10 years since I've done? AFA!!! The American Forensic Association's National Individual Events Tournament.

AFA was in Eau Claire, WI this year, so Ben and I packed up the boys and went up to judge a few rounds and let our kids frolic in clouds of second-hand smoke (because almost every speech competitor and judge STILL SMOKES)

Harry was thrilled to be going on a trip and staying in a hotel, the skeezier the better. Which is good because we stayed at the same hotel as Bradley, thinking that because we had adjoining rooms, we could put the kids to bed in their room and maybe have a few drinks in our room. But we were exhausted. And the hotel was a total shithole.

Harry and Jack and a giant gas station mouse: (a gas station that was so dirty, I think we would have been better off not washing our hands because the sink! Oh my god.) 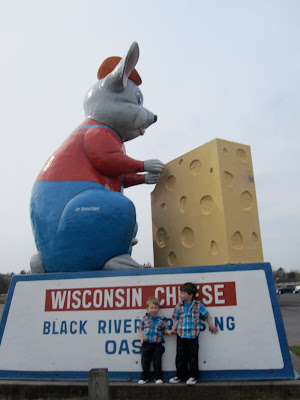 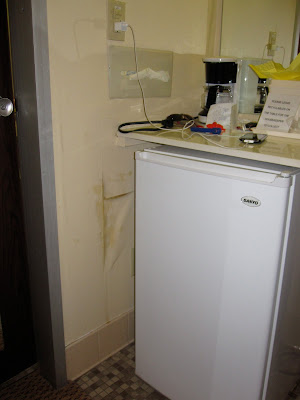 Ben chillaxin with some wine. (Note, Harry's favorite thing about the trip was the flowered hotel bedspread. I didn't tell him about all the different kind of DNA on those bed spreads. Even he was a little grossed out by the not-ours booger on the inside of the (cloth) shower curtain though.) 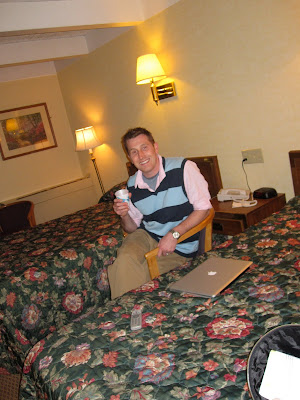 Every time it was my turn to watch the kids while Ben judged, I stuffed them with shitty food and then dumped them on him at the peak of their sugar highs. MOTY. 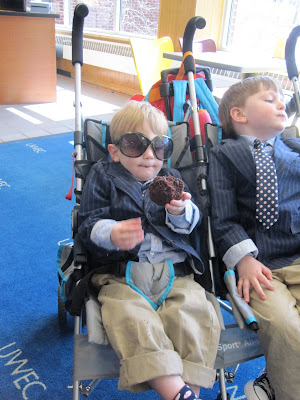 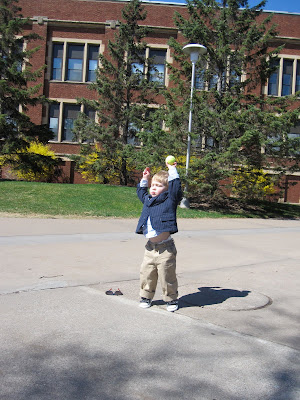 Harry was relieved that the E.Bunny found him at his hotel. 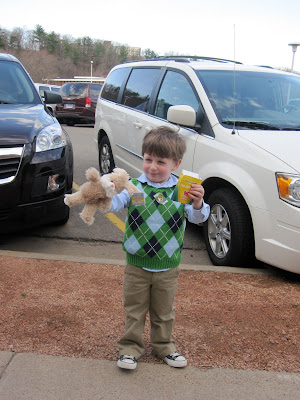 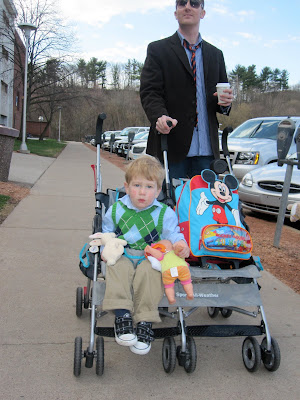 We just frolicked and flew kites for 3 days while Bradley won the tournament!! 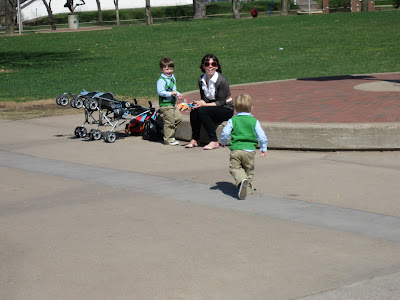 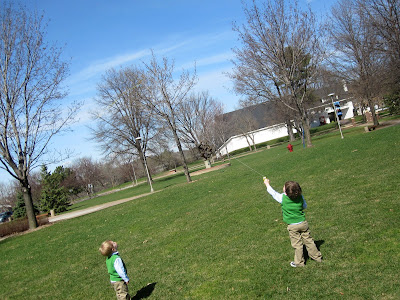 Here's what super trusty Wikipedia has to say about the Bradley Speech Team:

Bradley University boasts the nation's most prolific college forensics team, with their American Forensics Association Championship winning streak from 1980 through 2000 only broken in 1994 and 1995.[8][9] Bradley's forensics team hosts the nation's oldest intercollegiate competition, known as the L.E. Norton Invitational. The tournament is named after former forensics director L.E. Norton. The team also hosts an annual tournament for high school speech teams, known as the George Armstrong Invitational. The Speech Team has become the most successful intercollegiate team in history.
Since 1979, Bradley University has had one hundred and fifteen individual national champions.[clarification needed] No other team has attained as many individual national champions. Since 1980, Bradley has won nationals thirty-three times. This record of success is unmatched by any other college forensics team in the United States.

This was the first time the team won AFA since 2000. Ben and I were both on the team way back then, so we wanted to come back and watch them reclaim their title. Because we are huge dorks.

Comfortingly, we still knew tons of people, and all the boys still carried briefcases even though the business world has moved from attaches to messenger bags in the past 10 years. It was a total time warp from start to finish, and we LOVED it.

Speech friends, start packing your bags for NEXT YEAR'S NFA in Bloomington, IL.

Here's Ben and Jack snuggling this morning. Ben always gets up when his alarm goes off, but sometimes he only moves (with blankets) from the bed to the floor) 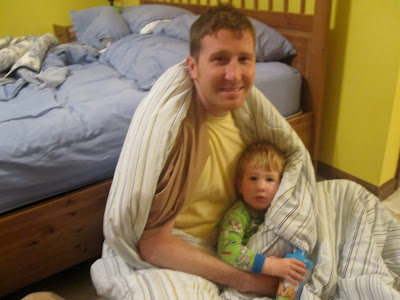 Harry and jack were beyond relieved that the E.Bunny also came to their house, with considerably more loot. Like these Big Wheels. If it ever stops raining, we're going to test them out outside even. 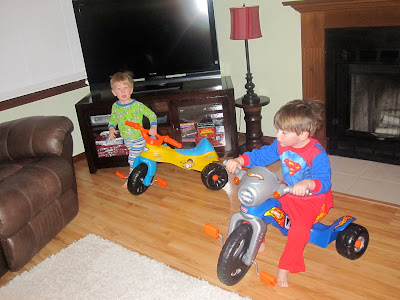 I've been waiting eagerly for your reports on the tournament...what wonderful memories, and the wikepedia.write up was wonderful... still have a copy of the poem you wrote ab out Passover that won the prises when you were16.Bomma

Ohdeargod, that hotel!!! The "not-ours boogers"? Made me throw up a little bit!

That picture of Ben & Jack is preshuuuuuuus!!!

Those big wheels are soo cute! I think it's great that your boys are already accustomed to speech, that makes me so proud!

I love the picture of Jack in the glasses - too cute! The hotel didn't look bad, but maybe they just need some good cleaning?

How quickly you forget, my friend...

That Super-8 where the rednecks were literally gutting deer like 30 feet from the side exits? And they didn't even offer to share.

Glad the boys mostly enjoyed the skeezy motel. And glad the Easter Bunny braved the booger.

I can't get past the hotel... yuck yuck yuck!
But glad you had fun and the Easter Bunny found you :)

Is it just me or does Jack look like George Burns in those big glasses in the stoller?

I hate skeezy hotels. Every time we traveled for swimming growing up, we stayed in a dump. I used to be just paranoid about blood stains on the hotel sheets (yes, you read that right) but after a horrific experience while pregnant with Aidan, I am now terrified of bed bugs as well. Fun times.

I was reading your entry and Misty's comments to Dave and we were cracking up, remembering the nasty motels we have stayed at for speech!

looks like it was a blast, Sarah! I only went to nationals two of my four years at Bradley (the other two, I was too nervous to be on the team...story for another day) and it was so intense!! Go Bradley!! :)