I want an iPad. Of course I do. 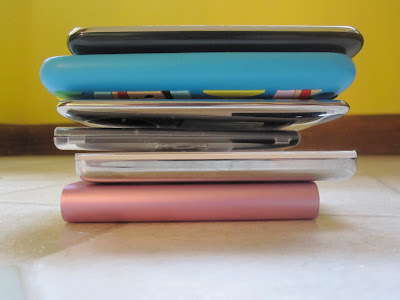 Clearly we love our iPods. And also our iPhones.

From left to right:
My Mini (that I got for my birthday in 2004 from my parents and was my first iPod and one of the best b-day gifts EVER. It still works as long as it's plugged in, but it will no longer hold a charge. I LOVED that thing and still have the cute little Urban Outfitters cover I used to carry it in and the armband I used to jog with it), my Classic (I got this in 2006 from a textbook company because my class did a pilot study with our textbook on iTunes-- it didn't work, but the iPod is still going strong almost 4 years later. I used it as a brag book when Harry was a baby because I had just learned how to sync it with my photo library, and I still have a slide show of him from the summer and early fall of 06), Ben's Nano (whom he named Valerie-- a 2009 birthday gift that I now use in my car), Ben's Touch (he got himself this only months after I got him the Nano, hence the ungifting), my phone, and Ben's phone (which is cooler than my phone because it is a 3Gs, and Ben always acted like iPhones were stupid until he got one, and now he knows they're totally awesome). 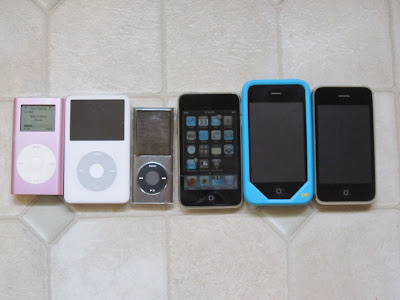 We're just loyal Mac customers all round, I guess. Notice my computer is wounded and needs a sticker to cover its gaping hole? Yeah. it is. I need to take it to Best Buy, but I have dreams of replacing it with a MacBook Air... 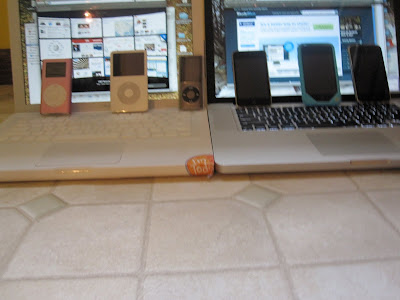 We too are a Mac house. Aidan even recognizes the Apple symbol!

I used to think I wanted a MacBook Air too, but it ended up not being a good fit for me. I use my laptop for everything, and when I am at a desk, I attach a second monitor. The MacBook Air keeps its weight down by keeping all the accessories external. Even the internet connection is external. I went with the 13 inch MacBook and love it. When I upgrade, I'll probably do the MacBook Pro 13 inch because I am a sucker for the titanium case!

Sam bought an iPad and it is SO COOL. It could be used as a computer for giving talks while traveling, but it does not really replace a laptop. It is just the most awesome toy you will have in your house.

The Kindle app on the iPad and the iBooks app are AWESOME. I know there is all kinds of backlash about getting rid of paper books (and I love paper books even though I have e-book readers), but seriously, they are cool. There is even a Toy Story book that has an option to be read out loud by a narrator. (Aidan was mesmerized).

I brought Sam's iPad to A's preschool to provide additional visual aids when I read his class a book. I am thinking it could be used on planes to watch movies (the battery life is ridiculously long -- something like 12 hours from several NYT tests!) and will be a lifesaver in the car on long road trips.

We do not have the 3G version for several reasons. The first primarily being that Sam cannot wait very long when he gets an electronic obsession. The second is we didn't think we would need it all that much since wifi is everywhere we go.

Go for the iPad! You won't regret it!

My husband has dreams about a Mac. I think it's our next "big thing" that we'll be saving up for.

I always tease all the Mac people around me that they're drinking some sort of special kool-aid. It's like they can't help themselves. Some "force" made them go and wait for hours in line for the iPad.

We're going to visit Matt and Sandy this summer, and I REALLY want to buy an IPod Touch for the trip. But Dave insists that the battery life is really short. Do you like the IPod Touch? Is it worth the $300?

Joe won an ipad at a conference he attended for work. He played with it for a couple of days and decided it wasn for him. He said it was just a large iphone with no phone and more expensive apps. He is cheap so I think paying $10 for an app turned him off.

An apple a day keeps the mommy happy. I turn my nose up to PC users. I just can't believe they're still out there. Mac all the way. I too love the ipad but I think I'll wait for 2nd generation.

We live about 2 miles from Apple and I keep hoping they'll institute an "everyone who lives w/in 5 miles of us gets free products! whooo hooo!" policy. But alas, they don't. Damn it.

I've seen one, up close and personal, though. It's gorgeous in a "ooooooh, iPaaaaaaaad" kind of way, but I have no idea what I'd do with it that I can't already do with one of my other 4 Apple products.

We're also a "wait for the second generation release" kind of family.