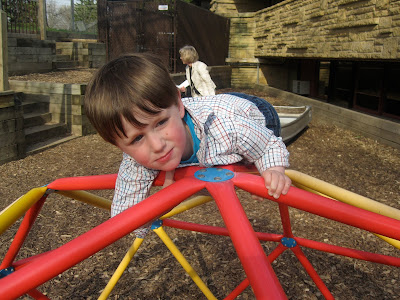 Yesterday, Ben got to attend "Special Person Night" at Harry's school. After Harry bossed Ben around on the playground, 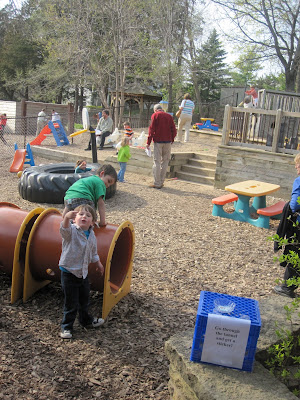 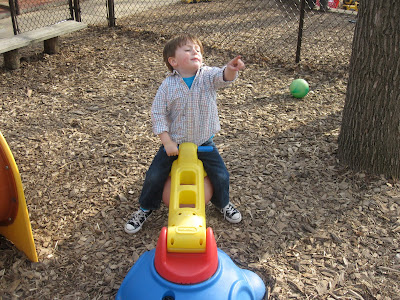 did some teeny laundry, 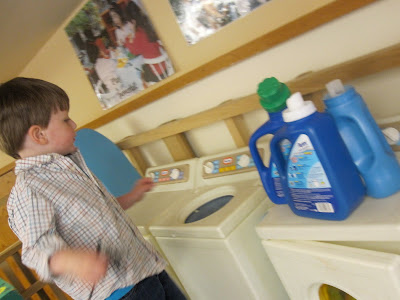 hung it on his teeny clothesline, 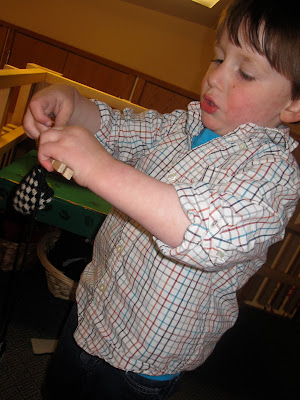 and went back to the playground, 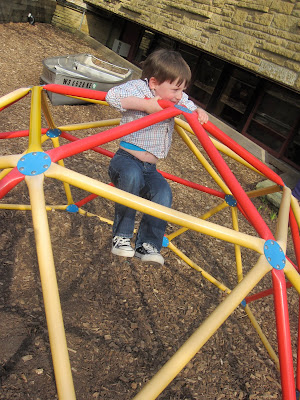 I met the two of them at Noodles and Company.

Noodles was packed with nursery school families because Harry's school had a fundraiser after Special Person Night, and 25% of everybody's meals went to the school. Harry was delighted to be eating with all his friends, and he flitted around between tables, shyly saying hi to his classmates.

Across the aisle from us sat a family of 4 with a little boy about Harry's age and a brand new baby. The baby was absolutely adorable, all round and red and tiny-- it would fit in the space between your elbow and your wrist-- that's how tiny it was. I could not stop looking at the baby with its creepy, spazzy newborn hands and its cute little rooting motions and sucky noises. The mom nursed it at the table and didn't even drop lettuce in its hair like I definitely would have. When she was done feeding the baby, she passed it to her husband, who nestled it on his shoulder and patted its little back.

Then the mom fell upon her salad and ate it like an animal pursued. The little boy was chatting happily. The dad rocked the baby and started blankly into space, and the mom flung her fork down and sat, slumped and frozen.

They don't even look tired, he said. They look like zombies.


They DID look like zombies. The mom didn't even button her shirt back up after she fed the baby-- that's how out of it she was. The just sat there until the little boy said 65 times that he was all done. On the 66th rendition, the parents locked eyes and wordlessly got up and gathered their things. The dad tripped over the infant seat. Twice.

All of the sudden, that baby didn't look so cute. It looked like a relentless little parasitic dictator. But you want to know something? I want one anyway.
Posted by Sarah at 8:31 PM

just let us know when the time is here...Bomma

Thankfully the zombie stage ends eventually :)
Your post even makes ME want one... doh.

I had to laugh at this one! We aren't adventurous enough to go out with a newborn. I don't think I could function that well in public :) Well, when AJU6 was tiny that is. I have held it together many times now...

LOL, I hear that! I keep trying to comfort myself with the "thank goodness we won't have to go through THAT again." Buuuuuut, I'd do it in a heartbeat!

I saw a mother pushing a two seater stroller across the street with two adorable boys strapped in tightly. Oh yeah and she was wearing her third in front. I immediately thought how friggen amazing she was to be out with all of them. Then I thought, Oh Sarah, are you sure that's what you want? Yeah, I talk to you sometimes.

I just attempted all three at the zoo. I looked like I was herding cattle. I just keep telling myself, it WILL get better.

I can't even begin to tell you how tired I am. Don't get me wrong, I love them all. But it's hard. And even harder doing it alone all freaking week.

I know it gets better, it has to!