Have I told you that Jack calls me Mommy? Well, he does. I enjoyed years of Mama from first Harry and then Jack, but in the last week, Harry made the switch from Mama and Dada to Mommy and Daddy. Ever the worshiper of his brother, Jack followed suit, and just like that, Mama is gone. 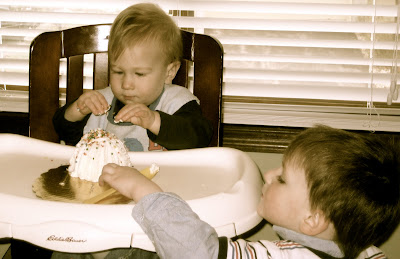 Jack was quiet for so long, he'd only really been saying Mama for 6 months. Now, he says all of our names: Mommy, Daddy, and Harr-eee. And his own name, Me.

He turns 2 next Friday, and we'll celebrate with cupcakes for breakfast and a playground picnic and our regular Little Gym class and a mound of presents that Harry will surely steal and possibly break. 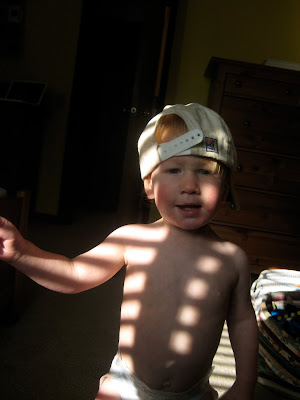 When Jack was 4 weeks old, he started crying and didn't stop for two months. 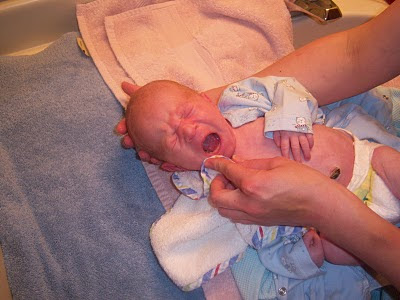 I don't remember those 8 weeks, just a few stolen moments. Coming down from the shower and finding Ben and Jack both asleep on the couch, one worn out from running laps around the living room with a squalling baby, the other from squalling. Taking the boys to the park and watching people glare at me while Jack screamed and Harry played. Once Jack erupted at the end of my hair cut, and I left him screaming in his carseat while my stylist finished my bangs because I knew if I picked him up, he'd cry in my face. 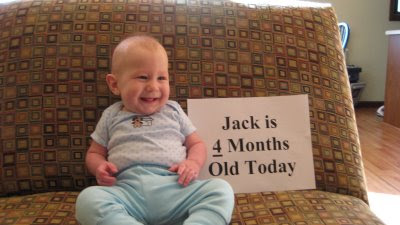 One day, he stopped crying and lived happily ever after.

He calls all blankets "yellow" because that's the name (and color) of Harry's favorite blanket. He still loves Bebe and takes her with him everywhere. He does everything Diego tells him to, and he calls himself big boy when he uses the potty. He can tell you that he is going to be two (dew), and he can hold up approximately 2 fingers-- sometimes more, sometimes less. In the morning if I am at the sink doing my hair or makeup, he climbs into my bed and smacks the pillow next to him telling me, "Mommy. Pillow. Snuggle. Me." He gives loud, wet kisses, and he likes to drink dirty bathwater.

When he was a baby, we called him Squishy because, well, look at him: 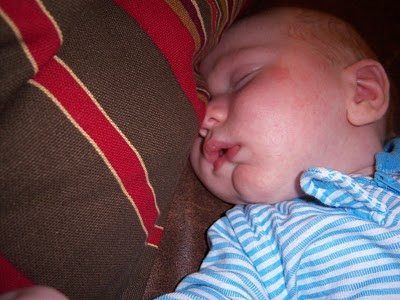 Now he's Monkey Jack or Jack o'Monster because his missions are to scale and destroy everything he sees. 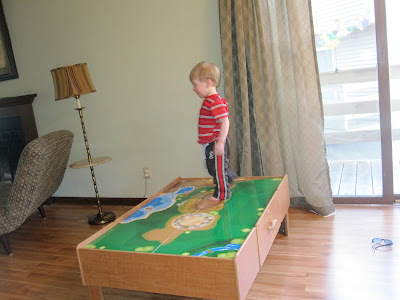 What's really great about him though, is that he saves me from my own writerly bad instincts. I can't say something trite and flat like "everything about him is sweet" because he has really bad breath in the morning, and he bites when he's angry.

Thanks, Jack. I can't imagine my life without you.
Posted by Sarah at 2:52 PM

So sweet! Wes is a biter too. It's all he's got since he's outweighed by almost 50% percent!

I can't believe Jack is almost two! Can you believe Harry was this age when Jack was born?

Ugh! I love that 4 month old picture. He looks exactly the same but longer. :)

Isn't it sad that the younger kids stop being babies faster because of their older siblings? Zoe says "Mommy" quite often too. She also already drinks from an open cup, uses utensils and feeds herself, brushes her teeth and hair (albeit pretty badly still), all things that I did for Aidan until he was much older!

I love that Jack calls himself "me!" Aidan was "baby" for the longest time!

I remember him looking something like John McCain- kind of asymetrical and disgruntled- as an infant. But looking at the pictures, he was like an angry little doll!
Happy Birthday, Jack! We LOVE you.

So so so sweet!

That Jack, he's a total cutie.

It's the bad breath that really pushed Eli over the edge from Baby to Boy. I desperately miss being Mama, but he knows to use it when he wants something. Happy Birthday Jack!

I totally remember when he wouldn't stop crying. One of my favorite posts of yours ever was the video you posted of you & Ben laughing (and a little twitchy) while both Harry and Jack cried and screamed). Priceless.

This is such a sweet post; I have so loved watching him grow up these past two (can't believe it's two!!) years!

I can't believe how big he has gotten. There is no possible way he is almost 2 (and yet I know he is- stupid time/aging!). He does sound like a lot of fun though!