Remind me, won't you, that I had this giant latte at 2:00 pm. You know, when I write an entry freaking out about insomnia at like 3 am. 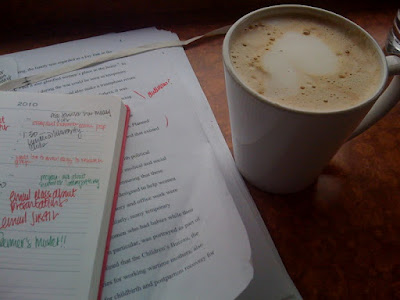 That paper with the scrawled red writing is my essay. I had such a nice time marking up student book reviews the other day that I turned my red felt tipped marker on myself because I have such a hard time editing on the screen.

I signed up to be part of a research group for a conference next month, and I have to email a draft of this essay to all the people in my research group. Like, tomorrow.

This is the third-- and best-- chapter of my dissertation, and it is really hard for me to dig it out of its carefully assembled context so that it can stand alone. Especially with this extremely loud group of old men behind me talking about Casablanca. The place, not the movie.

It's about discourses of health, democracy, and family planning in Planned Parenthood's WWII literature. Basically, images of ideal families became shorthand for national security-- a democracy could only be as strong as its families. Women's wartime work outside the home was both praised and marginalized, both publicized and depoliticized (by the strategic ignoring of childcare issues for example). At the same time, returning soldiers were enshrined as both familial heads and breadwinners, encouraged to be active fathers and warned that they needed a nag-free home and an easy transition to civilian life. This is the historical moment when women started working a double shift and men gracefully bowed out of housework after clocking out at 5 pm. It's important to think about what Planned Parenthood said about birth control in the middle of the baby boom-- the organization had a lot to say about who should have lots of babies and who should abstain for the good of the nation. I argue that Planned Parenthood rhetoric during this time help articulate notions of the white middle class and segregate work by gender and that these cultural contributions have left a legacy that were still working through.

Hmmm. That was way more concise than the 46 pages I am staring at next to my laptop. Neat. Thanks internets.

Oh! Guess who totally screwed herself out of preschool summer camp by waiting 6 weeks after enrollment opened to try to enroll? That'd be me, who currently has one kid signed up for Tuesdays and Thursdays and the other one in a class on Mondays and Wednesdays. Eff that. Hope we get off the wait lists soon :)
Posted by Sarah at 1:51 PM

Ohh, yuck! One kid in camp at a time is no good. Your essay sounds really interesting. And I am jealous of your clarity and coffee shop writing time! My laptop broke and now I am stuck at my desk at home.

I too cannot edit or read papers that well on the computer. I wish I could because piles of papers make my backpack heavy! And then I always transcribe my notes / edits back to the computer anyway!

I wish I knew of a good coffee shop nearby where I could work. I am actually surrounded by coffee shops but they are always packed with laptop-weilding 20-30-somethings and tables are hard to come by.

I would LOVE to sit in on some of your classes; I am always fascinated when you share information from your dissertation and it so makes me miss being a student.

And your title made me laugh--it is indeed 3am here and I am wide a-freaking-wake. I didn't even have a latte!

Thanks for reminding me that I've got to sign E up for his school's summer camp this week. I am so screwed.