The Trouble With Tuesdays

A funny thing. I have been screaming about makeup and skin care for the last two posts, and actually? My fucking iPhone is going to fucking kill me.

The really funny thing is that I have cut way down on caffeine (I am currently sipping my second-- and last-- cup of the day), so I am not all that freaked out. I figure I'll use my landline when I am at home, use my head phones when I talk, carry my phone in my bag instead of my pocket, and text or email more often to keep the radiation away from my head.

The really, really funny thing is that the phone issue is probably way more serious than the products, and I should probably have spent the hundreds of dollars on a new phone, not on new eye creams and lip balms. Fuck it. I just want to throw up my hands and smear myself with the HFCS and gasoline paste Becca advocates.

But enough about my big bag of crazy.

I want to talk about my shitty, rotten, Tuesday mood. Because, you know, it's Tuesday, and I feel stabby.

But first! A detour into Jack's crazy land. This morning, the kid ate his waffle into the shape of Texas: 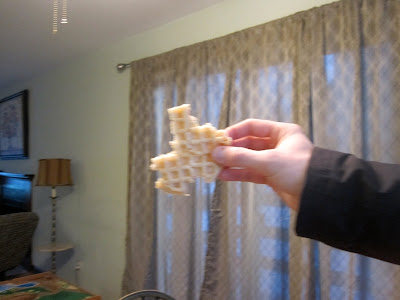 I have to get up early on Tuesday and Thursday, so the 5:18 wake up call doesn't help my mood. I thought it was the 3-4 cups of coffee swilled in rapid succession that made me all strung out and jittery by 7:45 when I attempt to fold 2 loads of laundry, pack a lunch for myself, and cram harry into some school clothes in the last 15 minutes before the babysitter arrives. But like I said, I cut down on coffee and still whenever Jack said my name (which was a thousand times a minute), I wanted to scream, "I'm right fucking here, damnit!" (but I didn't, duh).

This morning was especially sucky. Harry was all hyped up about his Whole Foods field trip, and Jack was giddy with the power of self-toileting and decided to remove his own crapped-in Pull-Up and investigate its contents. While sitting on my bed. So there were extenuating circumstances.

I guess I am just going to have to follow the advice I gave myself back in the dorky, dorky days of speech competition and try to Fake It Until I Make It. I'll just act happy as hell, and eventually I will BE happy as hell. Right? Right?? RIGHT???

As cute as Harry's class was lining up and riding a big yellow school bus and walking around Whole Foods like a flock of huge disobedient ducks (zOMG the other shoppers were PISSED OFF. I thought I couldn't get more dirty looks there than I did on Saturday when Jack ate a good portion of a Burt's Bees deodorant stick and tried to abscond with a handful of essential oils, but the glares our little group of preppily-named kids enjoyed was pretty impressive. Apparently, hippies are in a hurry at the grocery store on a Tuesday morning. Probably on their way to hot yoga or to skulk around a used book store.), I was not in the mood for a bunch of preschoolers and their indulgent parents. But I was surprised to note that Whole Foods has way better organic yogurt and cereal prices than Trader Joe's. Typically, I am only there to buy deli meat, to check out their organic produce specials, to grab some grass-fed beef, and to buy copious amounts of pre-made entrees, wine, cheese, and baked goods. I rarely take the time to go up and down the aisles, but I did today and was pleased. It is still not as shoppable as TJ's because the store is very small and the aisles are very narrow, but we may try to work it back into our regular family grocery run-- right now it is more of a stop in on the way home kind of place.

But I digress. Our tour guide was fantastic with the kids, and she gave them all taste-testing papers and crayons. After they tasted a new food, they had to color in a happy face, a sad face, or a neutral face depending on how they liked the food. Harry tried everything, and he liked things he would never try at home, like gouda cheese and zucchini fritters. I was in love with the one crabby kid in the group who chose a black crayon and colored all the frowny faces before the tour started and kept asking the teachers when it was time to go back. He and I were kindred spirits today. Oh! But I learned something interesting about PRODUCE! Our tour guide said that every night they pack up the whole produce department and take it back to the cooler. Then in the morning, they set it all out again. Am I the only person who didn't know that? Also, I think I would like that job very much, the stacking and arranging of produce. Like playing Legos without someone knocking them down. I may apply for that job if the whole academic thing doesn't work out.

Before we left, I took a couple pictures of Harry in his classroom-- I liked seeing a side of him that's usually hidden. Harry played quietly by himself while the girls in his class swarmed the teacher and a couple of the boys played trucks. 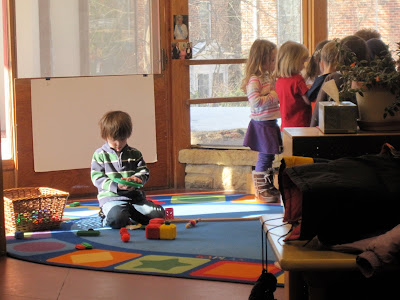 This picture was the inspiration for our after-school activity tomorrow: HAIR CUTS!!! 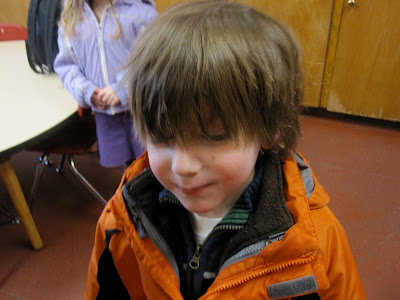 This is Harry's serious listening face 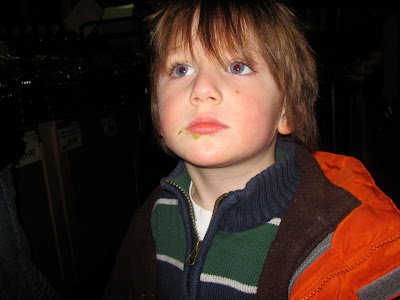 Who doesn't like to pose by a meat case? 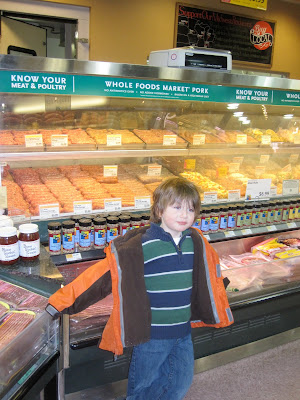 As you can see by his face, guacamole and drinkable yogurt were big hits 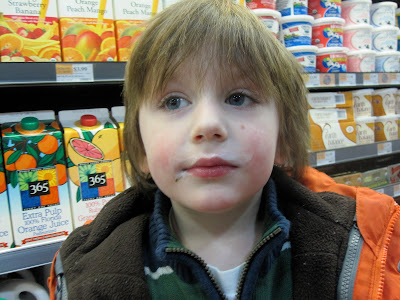 Someday his Facebook wall will be littered with pictures like these. But he won't be drinking yogurt. 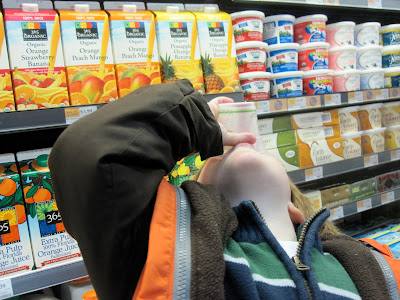 The bus ride was, predictably, his favorite part. 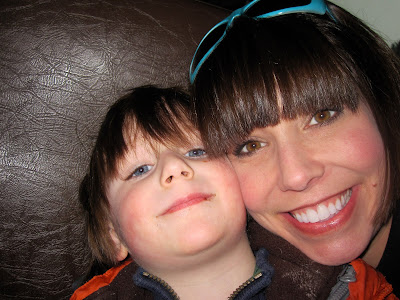 so not to freak you out more about your iphone, but if you have a headset/bluetooth it's even worse! i don't know about WI, but OR requires you to use a headset while driving-- it's all handsfree now. But the thing is, the phone itself emits a small amount of radiation, but the headset also has to pick up its own signal, so you get a double dose of radiation -- which researchers believe is linked to brain tumors and other super scary stuff (and i believe it too). sufficiently scared yet? i know i am. but then i think, my brain's fucked anyway, what do i have to lose?

what a good mother to go on the field trip...been a long time, but I kind of remember, and it was both fun and frustrating. Harry will remember this kind of thing when he is much older, and then you'll be pleased that you went..Bomma

It is Texas' Independence Day - so maybe Jack was on to something there!

I stopped reading when you said you get up at 5:18. I went to take a nap in your honor.

OMG I read this whole thing to Ryan. Could barely continue when I got to the part about Jack eating the deodorant. HYSTERICAL.

And the Neutrogena acne wash I picked up the other day might as well be gasoline but MAN it works like a CHAMP.

Sarah, it's all so funny. I love the way you tell a story. And I would love to stack produce, too. Sounds very Zen.

your hair looks great, by the way!

and now I am convinced the my iphone in my back pocket fried my ovaries.