The Crazy: An Update

In my last post, I was all "Blah blah blah blah, I love my Lancome makeup and am not changing it." Then I looked it up on the Skin Deep database and found out it's all poison. Eyeliner? A 7. Eyeshadow? A 9. Blush? Also 9. Lip gloss and stick? In the 6-9 range. Eff.

Because I DO love it-- nothing else I have ever tried-- and I have tried them ALL-- has better colors, prettier packaging, or more staying power.

Sadly, I tossed it all out, along with my DiorShow poison mascara and a Stila brozer/illuminator duo that might kill me on sight (10) and ran to Sephora.

I am really excited about the newish (August 2009) Sephora PURE collection, and I bought the Island Sunset palette which is not as ugly as it looks in this picture, I swear, although the blush is a little clowny. The PURE collection is not listed on Skin Deep, but I entered the ingredients and got a 4-5 provisional rating. Not too shabby. The Stila eye shadow I bought just happens to be a favorite, but it's a 5 on the database. The Origins powder (which? covers like a dream and actually stays on my face) is a 3, and the eye liner (mulberry-- the BEST COLOR EVER) is also a 3 and has a neat little smudgey stick on the end, which will save about 35 billion q-tips a week. I love my Primrose lipstick, and even though it won a Shape magazine green cosmetics award last year, it still gets a provisional score of 5-- but no cancerous agents, just endocrine interruptors and neurotoxins. 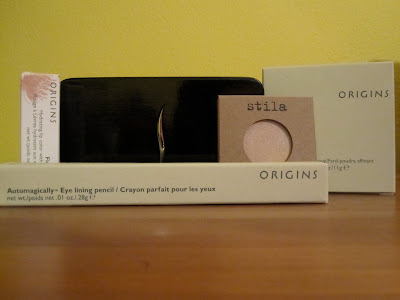 In retrospect, I would have been better off with Mac eyeshadows, which get a 4 and Stila lipsticks, which get a 4 also. I decided to keep my Lancome Hynose mascara, which is a 6 b/c the L'Oreal stuff, upon closer inspection, is a 5 and sucks. But still, there's aluminum in both, so I'm screwed there. I may try falsies, but the glue is, of course, deadly. Also Physicians Formula Retro Glow Ultra Dramatic Mascara, Ultra Black gets a 2, and I may try to snag it at Walgreens later. Origins also makes a 3 blush-- Pinch Your Cheeks, all shades, and most of their lipstick is a 4.

The other stuff I bought? Awesome. The California Baby stuff doubles as a good face wash for me, and the Alaffia lotion is heavenly. So far the Tom's deodorant held up to my workouts, and I added Tom's toothpaste for that dirty hippie smell all around. I am a huge fan of the Burt's Bees stuff-- all of it. I love the Jojoba oil as a makeup remover and scalp treatment, but it stains my clothes, which sucks. I also paid $12 for a bottle of Dessert Essence organic brand at the hippie pharmacy, but Trader Joe's has the exact same brand/size for $6.90. TJ's also has terrific hand soap, so I am phasing out our toxic stuff with that, and I am going to try TJ's hand lotion for our sinks when our Bath and Body Works stuff is gone.

Also? I just became so much harder to shop for, as I will never touch a Lancome or B&BW product again.

Ben pointed out that I was a smoker for 8 years and also used to put steroid cream on my hands and feet every night when my psoriasis was bad-- and I'd wrap my hands and feet in latex gloves so the steroids could really soak in. Think of the innumerable pedicures I have enjoyed. Also, I WORKED at Lancome and pickled myself head-to-toe in make up and product everyday for 2 years. The damage, is his point, has already been done.

Harry and Jack, in a a rare moment of not trying to kill each other. If you look closely, you'll see Jack's hot pink underwear. 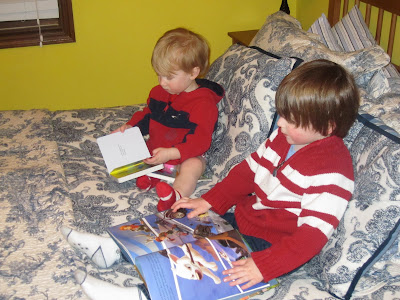 Jack snuggling after his bath. He's only truly snuggly after bath and/or when he's sleepy. 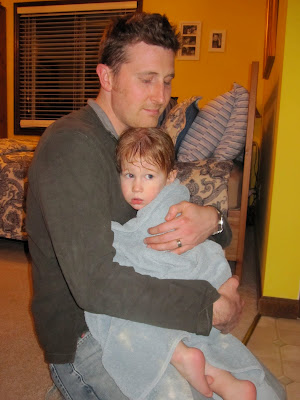 But he'll still smile when his big brother makes a joke, no matter how tired he might be 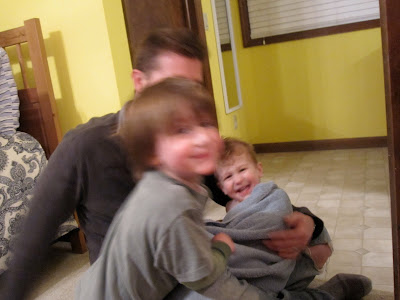 We went shoe shopping for jack, who always rips his shoes off, and last time he did that, it was a sign that they were too small. According to the shoe saleslady, his current shoes were fine (note: she's a bad saleslady). Harry, though, (who has been falling down a lot, come to think of it)has been wearing a 9. And measured into an 11.5. Hahahaha. Ooops. He said, "Oh, can I have some Sketchers?" We were like, how the crap do you know brands of shoes? He was all, "I saw a preview for them on TV. Gimme." By preview, he meant commercial and by Sketchers, he meant these ginormous light-up ones. Awesome. (Jack found some super ugly black Crocs with red and black-checked fleece lining that he HAD TO HAVE and now both kids have terrible, horrible shoes. Win.) 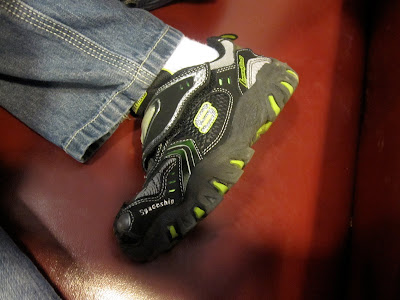 And of course, Harry asked what made his shoes glow green and Ben was all Uranium? Plutonium? And now I'm freaked out about something new. 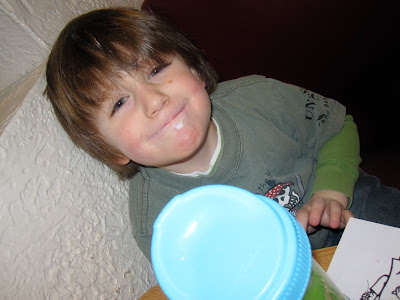 I smoked for 50 years when I stopped, used any kind of make-up and soap, ate whatever, did some crrazy dieting and still drink diet pop, how did I ever make it to81? Bomma

Have you ever tried Philosophy skincare? I don't know how it fares on that toxin screening thing (I should look) but it's really amazing. A lot of it is mineral powder based and very pretty but natural looking. they have a tinted sunscreen that is great with or without foundation and I'm totally addicted to it. Because I have horrible skin problems, I was thrilled to find that it is made by a dermatologist and works really well for me, knowing you have some skin issues you might try it too :)
thanks for getting me freaked out about all the cosmetic stuff i use! ick.

Cool, I love it too. I have a friend who works for Philosophy -- she got me hooked on it and gives me free stuff and now I'm badly addicted to it. I've found it works well with my skin problems. I looked up some of the products I use like Hope in a Jar and the Purity facewash and they're in the mid-range. the only thing that is bad is the fragrances and I love their fragrances :(

Charlie said to me once "Can I wear my church shoes? They don't hurt my feet like my sneakers." His church shoes were a 10 and his sneakers were a 9. OOPS.

And now he has light-up stride rite's.

I heart Burt's Bees too. Orange Essence is my favorite face wash. I looked it up and I think it was a 3. I'll survive!

Ok, now I'm feeling convicted about my makeup choices. I use a brand of Almay that claims to be natural and I did the look up on the website ages ago and now can't remember what everything is.

I would have been happy to take that cancer off your hands.

I was never into makeup very much until a few months ago, when I got some free samples and then some high femme gene inside me got turned on. Now I have an overflowing drawer and VIB status at Sephora.

That said, a big pile of the stuff I have is Korres because I like how warm and fuzzy natural it makes me feel. :)