I am such a style blog fraud

I wore a pair of faded Old Navy Yoga pants, an Obama T-shirt, and a green Northface hoodie to preschool drop off today. As hideous as this ensemble sounds, I grabbed a quick workout before drop off, so my exercise clothes were legit. (Still awful looking, though, especially because they were accompanied by curly bangs-- the horror-- and two frizzy pigtails. And I saw Valerie, who of course looked adorable in a cute little dress and boots). But then Jack and I went home and met with his speech pathologist and then instead of showering, I made dinner and prepped lunch. Then I found myself back at preschool for pick up in the same damn outfit. (am still wearing it, actually) (may still be wearing it when my husband gets home) (shut up. It's not like I have thrown in the fashion towel, but the kids don't care, and I have an evening of paper grading to look forward to).

Harry is studying restaurants at school, so when I picked him up yesterday, I offered him a lunch date anyplace he wanted to go. He chose Potbelly (god love him), so we went happily to the mall food court.

Where Harry ordered his own sandwich and shake 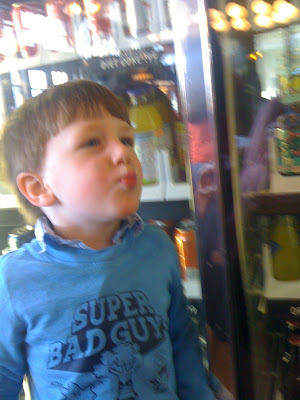 He really, really wanted to sit at the super tall tables, but once he was settled in his chair, he got a bit of vertigo 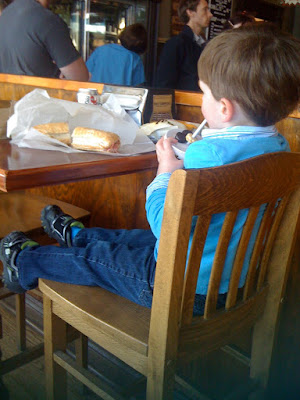 And we moved to a shorty table, but he remained wary and kept checking how far away the ground was in case he fell 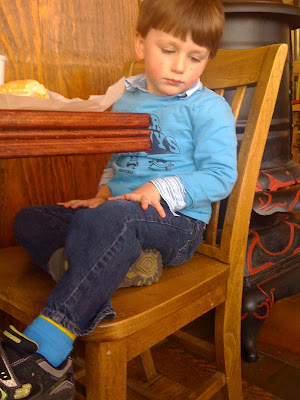 As you can imagine, he was an excellent conversationalist throughout the meal. 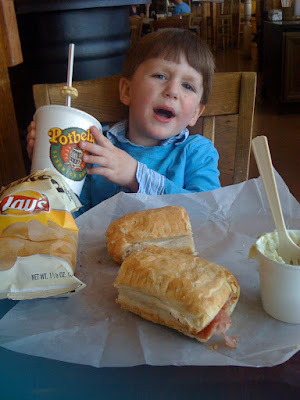 Wish me luck-- I'm going to try to shower before Jack's done napping, so the TV babysitter doesn't have to try to pacify BOTH kids.
Posted by Sarah at 1:35 PM

So funny! I'm kind of slummin' it today too. It's overcast, I blame the weather.

I wish I had been there. LOVE t chat with harry!

I think we should all be allowed one day of not dressing "nicely" a week. At least you spent time being productive instead of dressing nicely (as opposed to spending that time at the computer)...

omg, I haven't posted on the fashion blog this week b/c I have been a shlump ALL week!

I love your pictures of Harry; he just seems like so much damn fun to hang out with.