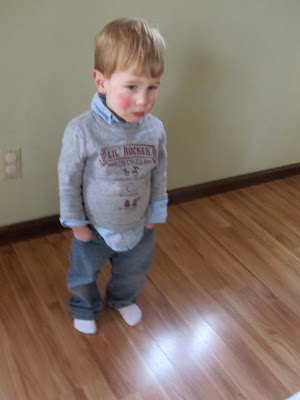 I totally rolled my eyes at Jack's speech-language pathologist today when she suggested we put tiny pieces of bubble gum in the back corners of Jack's mouth to encourage him to chew things up. I mean COME ON. Like I am going to give my not-quite 2 year-old gum. Does she get a kick back from a dentist to give that advice?

Then Jack took too big a bite out of a Reese's Peanut Butter Cup after dinner and projectile vomited all over the dinner table, and we started thinking about helping him chew.

But no gum. Or gummy worms or Twizzlers or fruit snacks which were her other 3 suggestions. Seriously, she gave some terrible nutritional advice. Like frying all his vegetables. Or encouraging him to dip all his food in ranch dressing. WTF?

The thing is, Jack has to have huge pieces of food (like a whole apple) or teeny little pieces (chopped apple). Medium pieces (apple slices) are hazardous to his health because he shoves them all in at once and sometimes doesn't even chew. He's almost died on orange slices a couple of times (you'd think once would be all it took for us to start cutting up his oranges. And yet.)

The SLP thinks that this might be due to oral motor difficulty-- the same difficulty that delayed his speech (I say delayed in the past tense because he has 75 words now and normal for his age is 50 words, so he's not delayed per se. Still, he has pronunciation problems), so she comes to see us every month to 6 weeks. Today, she wanted to talk about feeding issues, which was annoying because I am determined to make food NOT an issue in our house. We don't make the kids eat anything ever. Our job is to offer healthy choices; their job is to decide what and how much they want to eat. Period. She thinks we need to get Jack to try different textures of food-- and I get that, I do-- but I am not going to ever go down the road of bite negotiation ("just take 5 bites..."). That's just not how we do things, and I don't think she understood my nutrition philosophy.

Jack was playing with this giant red ball with a handle that he loves to hop on but can never go near when Harry's around, and he periodicaly put the handle in his mouth and chewed on it, which I didn't think anything of. She started talking to me about how when I saw him with something non-foodlike in his mouth, I should redirect his oral sensory skills toward food or drink to encourage him to experiment with edible textures. I think this is just crap advice. If he is hungry or thirsty, he'll tell me. With words. So I just sort of smiled and nodded. A couple of minutes later, he chewed on the ball handle again, and she paused and looked at me. I smiled. She stared at me again. I kept smiling. Then she said, "Okay, so this is one of those moments I am talking about where you need to offer him food or drink, something positive for his mouth." As nicely as I could, I explained that he just ate a snack and had some milk and I thought he was okay to chew on the ball. She repeated the "positive in his mouth" bit, and I tried to explain that I don't think that's a healthy habit to teach-- that the only positive things for our mouths are edible. But my 3.5 year old LOVES to chew on the straps of his back pack and frequently walks into school carrying his back pack in his teeth. So maybe I'm weird. 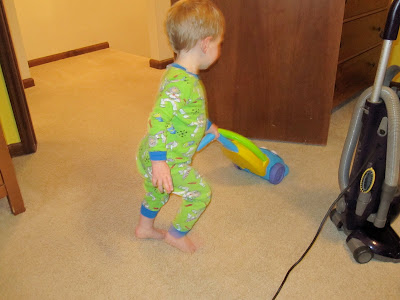 I meant to take a picture of Jack with my vacuum, but he ran away before the camera flashed. I actually really love with picture because this is just how he runs, and he runs wherever he goes. 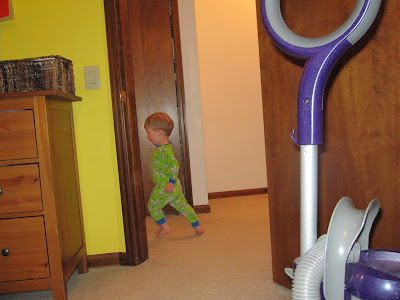 I think the pathologist doesn't take into account how easily food irection can add to food overuse...look at our family and having to watch what we eat (also maybe she just has book knowledge) not that that isn't important bit experience helps too.

You're not weird. Food and drink are for when we are thirsty or hungry. I cannot stand the idea of letting your kid eat and drink continuously all day long. And then complain that all they eat is crackers and won't eat their dinner. Argh! My kids chew on weird things too.

(Putting on my preschool teacher hat...excuse me while I dust it off...I haven't used in a year or so...)

I totally get what the preschool teacher is wanting you to do. Because he does seem averse to new food textures, encouraging him to try new textures will totally help with that. But...

Chewing on things that aren't food? So age appropriate. Unless he's eating your shoes instead of dinner, or you notice that he is turning into a goat, I wouldn't worry about it. Offering them food every time they do it? Um...yeah, you're asking for lots of snacking issues. Mainly that, if you're offering to Jack, you'll have to offer to Henry. :)

Here's my non-speech pathologist advice: When he wants a snack, throw in some food with textures he's not used to. There are TONS of healthy options that are chewy. First off, raisins? chewy. Dried prunes? super chewy. Dried fruits? Some are crunchy but apricots are pretty chewy. Those 100% organic fruit strips (replacements for fruit by the foot). Those things are chewy, delicious, and if you have a dehydrator, can be made at home. Marshmallows are another odd texture. Ooh, and granola!! That has a combination of textures, which is fabulous, and if you make it yourself, you can totally control how much is chewy or crunchy or whatnot.

Another thing? Trying to make Jack aware of when bites might be too big for him. A whole apple, he's obviously in charge of his bites. But, try slicing it, and then saying, "Wow, those are too big for your mouth! Let's make them smaller." Hearing you say that a million times, he'll soon get it and might start associating that some sizes are too big and need to be cut.

(Takes hat off. Puts it back in storage.)

Oh man. I used to chew on all kinds of things growing up, and I turned out OK, all things considered. I'm still kind of orally fixated that way, though--I just love to chew. I don't think there's anything wrong with it, though.

I would definitely be concerned with putting something sugar-y in his mouth all day. It cannot lead to good oral health or a good relationship with trying things not sugar-y.

I don't think you're crazy.

Naw dude. I think the SLP sounds a little nutty too. Love Virginia's advice! Totally gonna pass that to my sister to say to her kid.

I'm totally with you on not making food an "issue" in the house. There are so many other fights to fight, and once food becomes an issue it's really hard to break. I don't know much about speech pathology, but isn't the fact that Jack's willing to put all kinds of things in his mouth (rubber, straps, etc.) a good sign? Aside from taking bites, those things all feel different, just like different foods would. And gum for a 2 year old is ridiculous.

her advice was wonky, on SO many levels. Sugary snacks, bargaining, and eating when not hungry?

We went through SLP for my son too. Sensory Integration Disorder. Didnt say Momma until he was over two (and then the words flooded out).

Perhaps worth a second thought?