I think I am fine, in case you were worried.

The doctor I saw today (not my regular doctor but super nice) did not think I have a brain tumor. Instead, she told me to maybe calm down a little bit. (But to come back or to email her if I develop any scary symptoms or get too worried). She thinks it is either being caused by a low grade tonsil infection (my tonsil. they are so, so big. I wish my boobs were as big as my tonsils, you know, proportionately) or it may be a real smell, since Ben has smelled it sometimes. She also said if it's a real smell, I could legitimately be smelling it in my car and at work and that I should chill. Which? Easier said than done because when I opened the door to my office today, I was pleased to smell a stale, smoky smell (because that means it's real!). Then I ate my lunch w/o thinking of it at all, but now that I am done eating, I can smell it again, and I'm worried (when the same smell did not worry me 5 minutes ago). So yeah, Chill out. Also (and I forgot to mention this at the doc), sometimes it makes me cough. Would a manufactured smell make me cough?

In other words, nothing new to report.

Oh? Want to hear about THIS total clusterfuck? 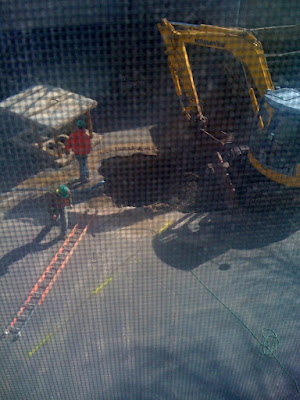 A water main broke at the foot of our driveway yesterday, and we had NO WATER from 8-8. We also had a giant 14 ft hole at the bottom of our driveway, which was inconvenient, to say the least. We were thisclose to packing up our crap and heading to a hotel when the water came on. Poor tired Harry lost his marbles because he was so excited about the prospect of a night in a hotel, but Ben and I were thrilled to be able to shower (well, I was. Ben is kind of a dirty bastard. No offense).

Because it was finally a gorgeous day here, we spent the day away from home running errands, playing at the playground, eating out, and using the facilities at Target.
See, these sunglasses are chic on anyone 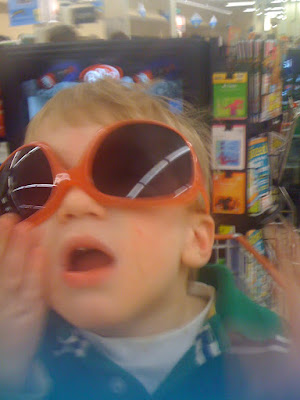 Jack trying out the booster seat. Not a good idea that. 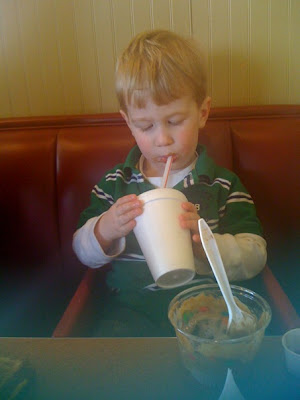 Thankfully, Harry started dunking his hotdog in his chocolate peanut butter m&m custard sundae because then I stopped taking bites of the sundae. Which? best sundae ever. It's from a little custard place by our house that I probably drive by at least 3 times a day. I may stop for one of these sundaes every time I pass the place from now on. Then, in 6 moths, I will rule the Biggest Loser. 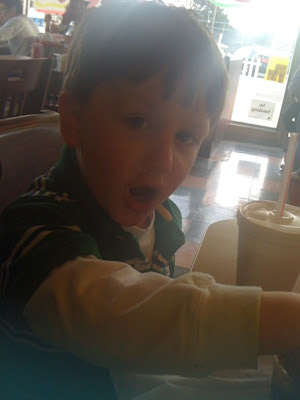 Funny beer. Anybody try it? I took this picture at lunch, and I so would have had 7 pints of this crap if I had known I would come home to STILL NO WATER. But that would have sucked because where would I pee?? 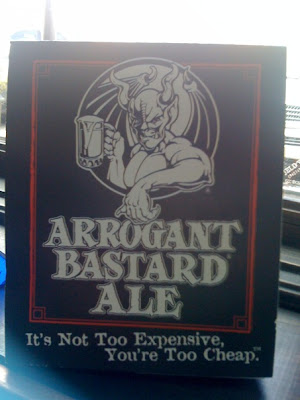 A usual (or what will become usual), I will end this post by urging you to got to All Kinds of Pretty and leave us a comment or two. We've been talking about everything from church clothes to baby slings to sexy date night outfits in the last couple of days, so check it out!
Posted by Sarah at 1:08 PM

I'm so glad for your post...I couldn't figure out the picture until you explained..glad the water is on, what about the hole in the driveway? Bomma

seem to have lost my comment in cyberspace, but glad you have water, and are not probably sick...Bomma

glad you went to the doctor. I love that she told you to maybe calm down a little bit. One of my previous therapists suggested after our first meeting that "perhaps you should switch to decaf?" Um. I only drink decaf in the first place. this is just how I AM!!!

And I agree w/ Becca--ever taken an Ambien? You might be sleep smoking. LOL

That smell thing is freaky. I wonder if it has anything to do w/ being a smoker in the past? I know now and then I swear I could smell smoke... and then I start craving cigarettes, (I smoked until I had Fynn) but I wonder really which came first. If you're stressed maybe it's a reaction to that? Who knows!

(I think I remember you writing about smoking years ago... but if that wasn't you, disregard this comment!)

What's funny Sarah, is that I too smell the exact same scent that you are describing. I've smelled it for the past month and seems to be lingering in a particular section of the house, one that is above the basement and also below our heating vent. Could it possibly be related to a heating issue or a plumbing issue? That's what I've attributed it to. Wait till the weather really warms up and see if you notice a change. Oh and the hot dog dipping wouldn't have stopped me. Doh.