Lighten up! Who cares that your tree is too big for your living room?

This year, I really wanted a Christmas tree shaped like an eggplant.  This wasn't a conscious decision on my part or anything like that.  I was just drawn to the fat-bottomed trees at the farm, noticed them standing firm in the middle of skinnier, more stately firs.  They all looked so shaggy, so silly, so-- as Kenneth Burke would say-- appreciative of their own foibles.  Like, when we sing the O Christmas Tree song, maybe the unwieldy tree is the one we're supposed to be picturing.  You know?  Anyway, I loved the fat trees the most. 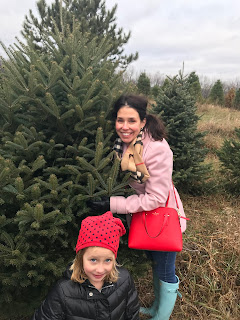 Ben, as always, was right there to humor me, after confirming that the beast we all chose was short enough to the living room. 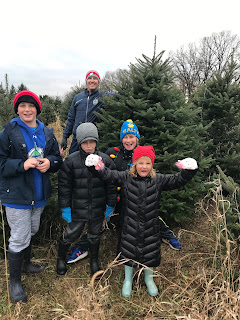 Yes, that sure is a saw.  Also, Cooper is biting Ben. 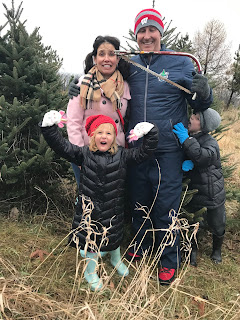 THIS IS WHAT I AM TALKING ABOUT FOR HOLIDAY SEASON 2018.  Jack is embodying at least 2 definitions of light at once.  I LOVE IT. 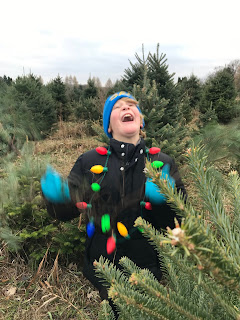 I also decided to play this song really loud on my phone the whole time Ben and the kids sawed the tree down.  I AM MADE OF WHIMSY, PEOPLE. 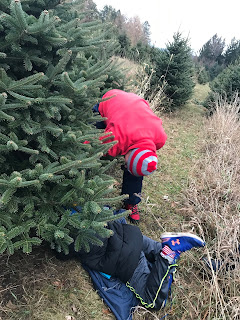 Do you see that tree with legs in front of Dorothy?  That's not a walking tree, you guys.  IT'S BEN! 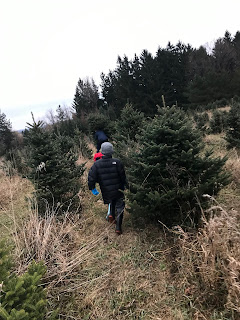 Our fatty tree was h e a v y, but don;t worry-- Dorothy was RIGHT THERE to help. 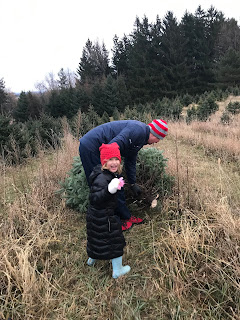 Speaking of traditions, this is the SEVENTH year in a row that Jack has chosen this exact ornament at the gift shop.  And then he comes home and writes the date in it-- SO SWEET 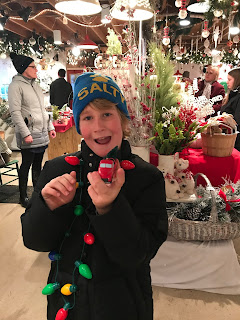 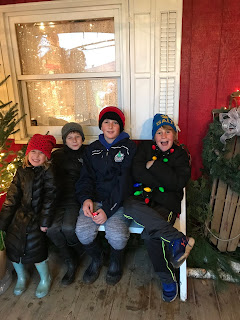 When we got home, we planned to out the tree between the couch and the kitchen table-- a YUGE area of dead space in the living room.

You can see this space in the picture below, but it's full of a GIANT table and big ole wood bench.

THE TREE WOULD NOT FIT.

It also wouldn't fit in the huge area of blank space in the picture below. 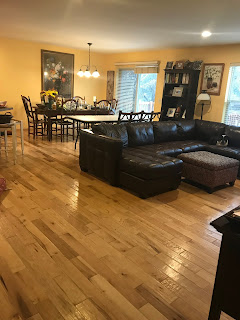 And then we moved the couch and tried to put it in front of the window.  BUT IT ALSO WOULD NOT FIT THERE. 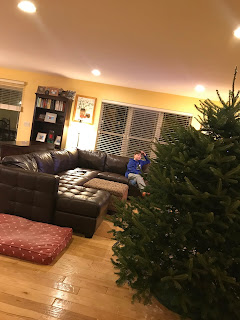 So finally (after thinking about taking the couch out of the room and also about putting the effing tree on the curb, we moved the bench to the basement moved the entry way table where the bench used to be, and sorry of jammed the tree up against the wall where it almost but doesn't quite eat the couch.

Then the kids got to town (after Ben strung lights and we all ate another round of Thanksgiving leftovers) decorating. 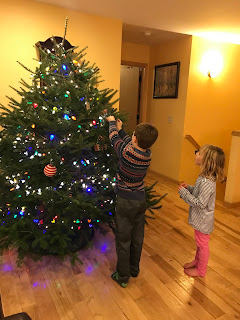 I love their happy chatter while they exclaim about their favorite ornaments and decide where to put things (and also, Ben rearranged everything after they went to bed, and they REALLY NOTICED.  It is a continual source of amusement for me). 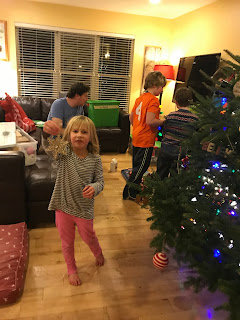 The star!!  Next year, I want this tree-topper so badly so my tree can look exactly like the one on my favorite Christmas dishes. 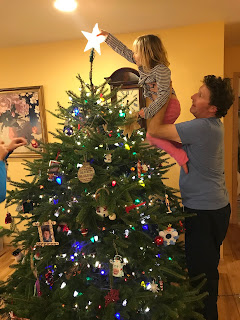 Jack with his collection of trucks o his bedroom tree. 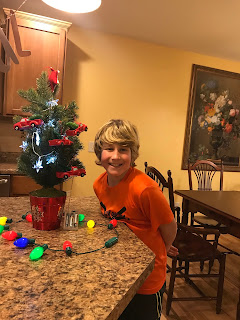 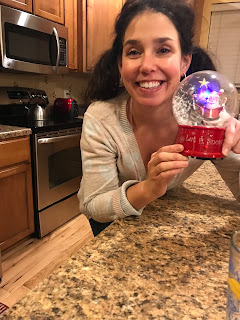 She's such a nice little accessory. 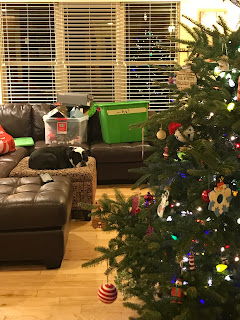 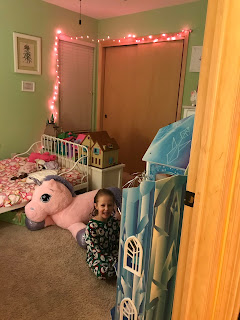 Ben and I noticed the tree was leaning, but we did or best to ignore it. 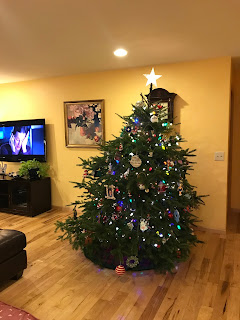 But then.  The next day.  It almost fell down the damn stairs, and we knew we had to fix it.  We did a few cuss at each other while one person holds up the tree and the other person loosens, repositions, and then tightens the tree stand screws.  But, alas.  We knew that the tree's surprisingly skinny trunk was just not suited to out ginormous tree stand (which we used because the tree is so fat) so we put the whole effing fully lit and decorated tree in our smaller tree stand.  Which, I have to admit, fixed the lean but was just so stupid.  WHO PICKS UP A TOTALLY LIT AND DECORATED TREE?  Me and Ben.  Sap.  Needles.  Cussing.  Using the "c" word as a unit of measurement.  And, of course, laughter. 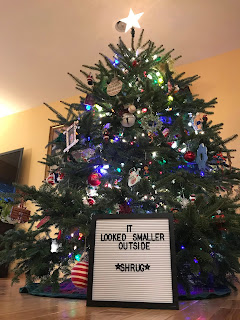 Winky Santa!  I HAVE SO MISSED HIM! 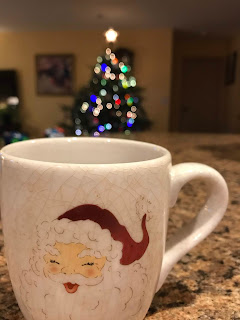 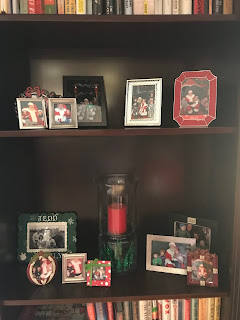 Thanksgiving over there, and Christmas over here. 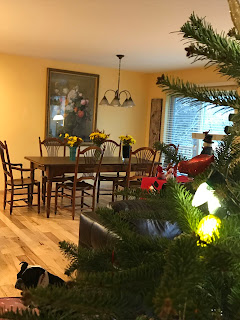 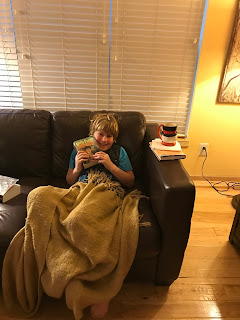 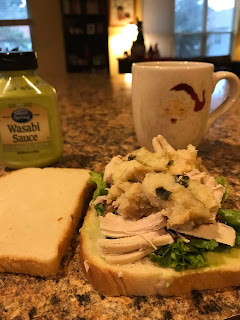 The most wonderful time of the year, indeed!

When we were in Germany, One year my mom made my stepdad cut down such a fat tree that no tree stand would keep it upright. Chuck got so frustrated that he poured concrete in a laundry tub and planted the tree in the middle of it. Do you know that concrete pulls moisture out of its surroundings? The needles were falling off within a couple days.

The four kids on the bench is adorable but it makes me sad that they will be squished next year.