From the Archive: Ear, Interfected Or The Projectile Vomit that Ate Christmas

Well, it's been a good run. 18 antibiotic-free months. Yesterday, however, Harry took his first dose of amoxicillin because he has his first ear infection. Also his first stomach virus. Also his first case of viral pink eye. Also his first cold of the cold and flu season. (And no, thanks, we're not total idiots-- we know the antibiotics are only for the ears. I was merely listing the myriad illnesses Harry seems to have gathered recently. Make that simultaneously.)

I have been taking him to the gym playroom while I exercise because it is too icy and generally sucky outside to use my jogging stroller, which is pretty much what I have done since Harry was born. This has been happening 5 times a week for the past 2.5 weeks-- so like 12 visits to the playroom. That's the only change we have made to his routine, and voila-- infectious disease central. I realize that the ear infection is not contagious, but the vomit and the gooey eye? VIRAL. Everyday there's a kid (not the same kid, either) in there with a wet hacking cough and a green crusty nose. A kid whose parents must not see the sign that says to leave your sick kids at home or read the playroom policies in the contract they signed to be members of said gym. A kid whose parents decide, instead, to let their sick kids infect other kids who can now infect even more kids.

Which means, yes, you guessed it, Harry will be infectious for the holidays. I asked the doctor if we could travel Sunday and Monday to spend Christmas with family. I said there would be other little kids, and I asked if Harry would be contagious and if we could go. The doctor laughed--- LAUGHED--- and said, "Oh yeah, he'll be contagious. But they're YOUR relatives..."

Ben and I bit our nails and hemmed and hawed. I mean, we have wrapped gifts to distribute. I made us all get matching sweaters. We made candy and cookies. We are ready for the holiday season, damn it, and we have been planning on-- counting on-- looking forward to spending it with family. We thought he'd probably feel and look fine by Sunday, so we could just keep quiet about the viruses he's harboring and spreading. Wash his hands a lot. Hope he and his cousin are still in the parallel play phase. And then go straight to hell for turning a joyous celebration of family into a sick-making infectafest. LIke those chicken pox parties people used to have-- but the thing about those parties? People KNEW they were bringing their kids over to get pocked.

So, we 'fessed up about virotoddler. and it looks like we'll be seeing Harry's grandparents this weekend(hopefully, fingers crossed, if Harry feels okay) still but not his great grandma or his aunt, uncle, and cousin and not all of Ben's aunts, uncles, and cousins. We are completely and totally beyond bummed about this. If we were supposed to see you on Christmas Eve and are not-- we miss you! We have presents for you! We have pink eye and the stomach flu with your name on it! (kidding).

Santa, dude, why do you keep bringing Harry and Max ear infections for Christmas? I am pretty sure Max did not ask for one last year, and I know Harry didn't ask for one this year! Is it because I keep making fun of your skeezy tobacco stained beard? Everyone knows mall Santas are not really YOU-- you would never come on duty with lunch remnants in your face hair, would you? 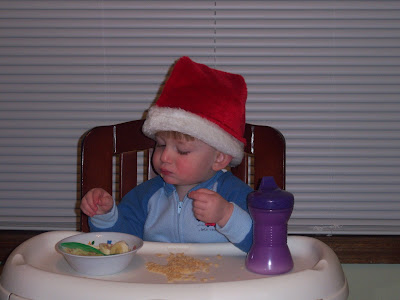 I should have been able to know from this stoney expression that something was up. Another way we should have known? For like 3 days, Harry has been saying eyes, nose, and ears with increasing urgency. I thought he was just trying to converse with us by screaming out some of the words he knows, but actually, I think he was saying, "Hey guys? My nose ears and eyes feel funny. Someone needs to take me to the doctor. I can't drive myself, beep, beep damn it. " 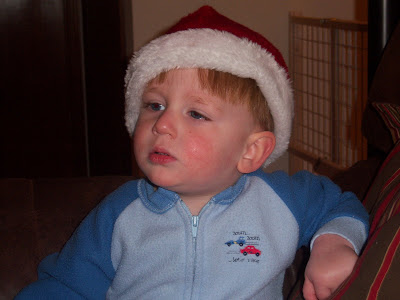 This is where I was ready to put a picture of our vomit stained bedroom, but it was too gross. Instead, here's Harry tucked in for the night Wednesday night. Don't let his coziness fool you. It was a night of trauma. I checked on Harry before bed to find him lying motionless in his crib in a pool of vomit. I freaked out, but he way okay, just gross, so we bathed him and changed his sheets and put him in our bed while his bumpers and mattress pad and stuffed animals got washed. The saddest thing? The "on" button on his Fisher Price Rain Forest crib soother was matted with puke-- apparently, he tried to turn on this soother to go back to sleep after he got sick. 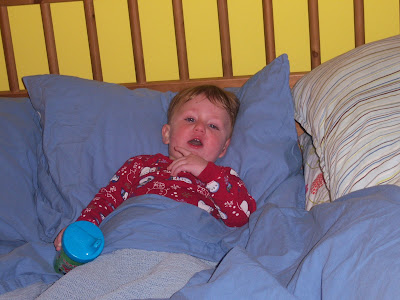 Then he projectile vomited milk all over me and the bed (Ben was miraculously spared). So here he is in pajamas #3. Moments after this happy shot, he puked all over me again, resulting in sheets #3 and PJ#4. Then, as Ben was saying good night (before retreating to the couch-- COWARD, I say-- no actually, he had an early meeting and needed a few hours of sleep), Harry coughed chunks right into Ben's mouth, so we all got to share the love. And the virus. 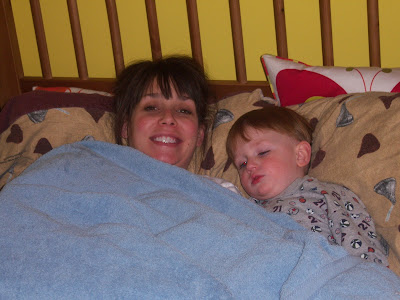 Here he is all snuggled down last night. (Yes, we washed the sheets). We were so freaked about him choking alone in his own vomit, that we put him straight down in our bed, cutting out the middle man crib. 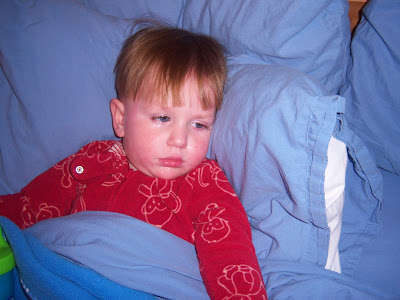 Moments after we took this picture, we offered him some Tylenol for his 103 degree fever, which he politely refused (the Tylenol, not the fever). We insisted. He projectile vomited. 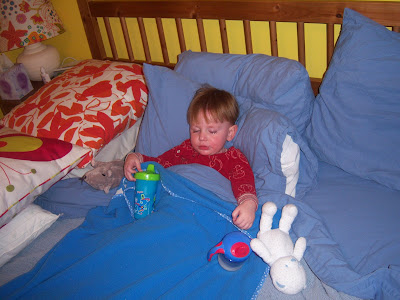 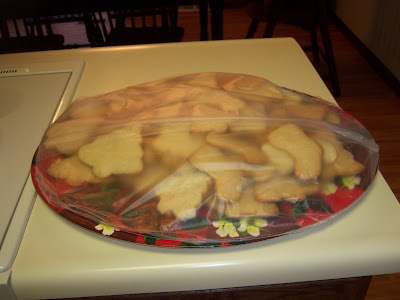 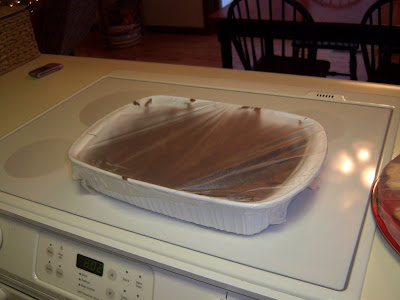 I am loving these First Kid posts! Look at that wall of pillows to keep a toddler from rolling off the bed!