Since Ben's school year begins the moment we get home from vacation, I decided to take Harrison back-to-school shopping yesterday, so that he could be ready to start junior high school at a moment's notice.  (I still owe the three other kids a trip out with just me for a back-to-school outfit and a new pair of shoes, but I can squeeze those dates in here and there after our trip).

Harry needed to buy all of his school supplies in addition to clothes and shoes for his gym locker and shoes and a new first day of school outfit as per tradition.  I bought supplies for the little kids in kit form through a fundraiser at their school. Cooper already got a new lunch box, and Jack has one.  And!  No one needs a new backpack! (Well, Jack kind of does, but I really only like Lands End backpacks, and I really only like to buy them on sale for like $20, so I am waiting).

I always always always ordered the school supply kits from school because they were so easy and were hand-selected by teachers.  They turned in a wish list, and Staples made it happen-- so awesome.  But!  As a result, I never knew that Harry has a deep love of office supplies JUST LIKE I DO.

Yesterday was SO FUN!!

We started at Office Max, a store Harry has never been to before -- can you even imagine?!

He totally loved it, although he did think I was a total weirdo for snapping his picture. 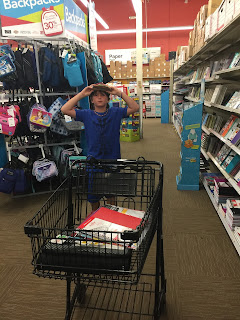 He picked a color scheme and then got everything in that color-- ruler, stapler, calculator, folders, notebook, etc. It was awesome. He even referenced his color scheme, which turned out to be bright blue with an accent of Badger-print.  I didn't buy office supplies for myself even though I, too, have a deep and abiding love for them, until I came to the pen aisle and saw that my favorite Uniballs were on sale for A DOLLAR A PACK.  Amazing.  But, as it turns out, they are really strange colors.  Like brown, for instance.  My bullet journal is going to be very fall-like.

Next, we headed to Kohls, which to be honest is someplace I almost never shop but should, especially for the 3 boys, to scope out their Under Armour selection and look for shoes.  Harry wanted a pair of everyday shoes, a pair of slides or Vans, and a pair of shoes to keep in his gym locker.  This seemed totally reasonable to me because right now he only has a single pair of $3 Old Navy flip flops and some Crocs from at least 3 years ago.  I LOVE SUMMER.

He immediately found a pair of Steph Curry high tops and a pair of obnoxious bright yellow Nikes, but then he started to tween sulk his way through the clothes section, and I realized he might need a snack.

Star Bucks drive through for the win! 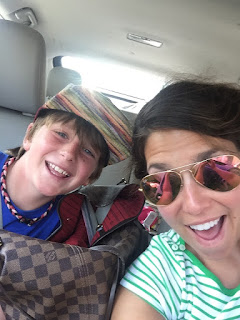 Fortified with a skinny latte (me) and a s'mores Frappucino and a warm chocolate croissant (so! much! sugar!) (him, obvs), we hit the mall, on a quest for gym clothes and shoes and an outfit to match the clear vision Harry has for his junior high debut-- a vision he wasn't really sharing with me.

I have not been to the mall in ages.  I was SO SURPRISED to see that Build-A-Bear is going to be a Vans store (but since all Ben ever wears are novelty Vans and since he hates Build-A-Bear with a fiery passion, I feel like this change was made with him in mind.  Now when he needs new shoes for an event, he won't even have to leave time for shipping.  Ha!). 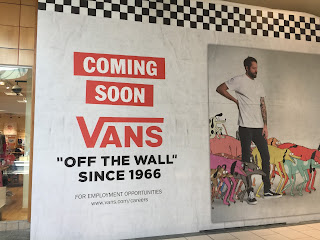 We started at Dicks, where Harry found an amazingly obnoxious red and purple pair of Nikes for gym class and pouted his way through the clothes again (what? the? hell?) STILL not telling me what he wanted.  I made him go to Sears to check their gym shoes and clothes (BIG NOPE), and we detoured to Champs to look at slides and The Walking Company to check out Birks.  I was all for Birks, and he liked them, too, but then I told him they looked better with like real pants and khakis than with athletic clothes, and he was like no way I hate the Gap, and I gasped because if it was up to me his entire wardrobe would STILL be from Gap Kids.

I made him go to JC Penney which I also totally recommend if you are shopping for boys and where we scored cute gym clothes to match his shoes.  But the actual clothes made him really mad, and I just! couldn't! figure! it! out! (Also that place has THE BEST Disney dress up clothes outside the Disney parks).

We went back to Dicks where he bought some slides and decided he no longer wanted his Steph Curry shoes-- meaning we had to go BACK TO KOHLS and I was getting really bored not buying things for me which is so hard because I always want stuff wherever I am even if the stuff is ugly.

The return lady at Kohls was super serious about confiscating my Kohls cash, which cracked me up because I had already lost it and literally NEVER SHOP THERE.  But!  Harry deigned to look at their Under Armour selection one more time and found what he was looking for oh my god finally, which meant we only had to run to Target for the rest of his gym locker supplies, and Target is practically home, so I got a new burst of energy.  Also, I learned that what Harry wants to buy is NOT MY BUSINESS.  I am there to swipe my card and say positive things about whatever it is he is choosing.  Unless I intuit from the sound of his voice that he wants me to not praise the thing he is holding up but maybe the thing he was JUST holding up or the thing next to the thing he is holding up.  If I had figured that out sooner, we may have cut our trip in half.  But then I would miss the other half because it was fun!!

You now who DIDN'T get an extra burst of energy?  This dog who took a second walk yesterday which almost killed her. 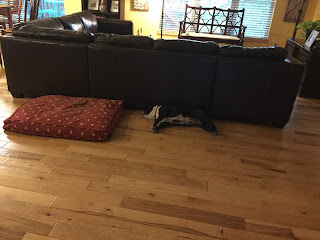 Badminton!  We play so much we have killed the grass on the "court." 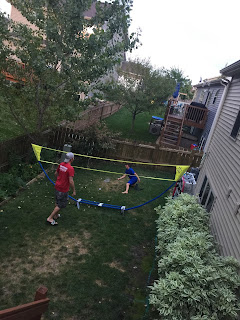 My brother's behavior while clothes shopping during his tween & teen years is infamous. It's been 30 years and my Mom still complains about it. He was a sullen nightmare (yet couldn't understand why both our parents preferred me. Lol).
I look forward to the shopping recaps for the next 3.
And I am obsessed with office supplies! The joke was that I became a professor so I could keep buying school supplies