We actually had a really fun and great weekend, and we did some things we don't usually do.  BUT.  I cannot even right now because I am still ruminating on the events of Friday.

The heater is broken at our pool, and the weather is NOT cooperating.  It's a high of 65 here today, and that's how it's been for a week (we are wearing jeans and fleeces, people).  Normally in late June a broken pool heater wouldn't be a big deal, but this late June is cool (which means it'll be 95-degrees in October and the kids will have outgrown all of their clothes, and the stores will only have winter wear on the shelves, BTW), so the water in the pool is below 77-degrees.  Swim lesson have been cancelled, and I haven't been able to take all of the kids to the pool because Dorothy HATES the cold water-- who can blame her?  (New heater going in on 7/3-- something about casting a new fire block?  IDK)

On Friday, though, I packed a lunch and my laptop and took the 3 boys over there at 11, planning to stay all afternoon and meet friends around 2.  I figured I could do the rest of a project I've been working on, update my online class a bit, AND read the excellent library book I was devouring all before my friends showed up, at which time it might be late enough in the day for a glass of wine. (This is why I am fat, by the way.  Thin people do not eat 2  desserts after dinner-- strawberry shortcake and then dark chocolate caramel candies-- or fries twice a day, and they also don't start drinking wine in the late afternoon.)

I got my work done before lunch, and the boys worked on their flips on the board.  Now that harry can back flip (thanks diving lessons!), he and Jack are a little competitive.  We all had a picnic together by the tennis courts, and then we came back inside the pool around 12:45, them excited to flip some more, and me ready to read my book for a blissful hour in the sun.

I was just setting up my towel when Cooper came screaming over to me, and I noticed that the lifeguard was standing up on his chair, craning his neck toward the diving well.

Because Jack back flipped too close to the board and smashed his face on the board!

Luckily, he did not pass out and was able to pull himself out of the water.  I walked with him to the lifeguard room where he was swarmed by guards who brought him ice backs and had him sit down.  We all started in horror at his face.  Right between his eyes was swollen so huge he sort of looked like a rhinoceros.   His nose was also swollen and the top of it was bleeding.  The man who had been sitting next to me came up and told me he was a plastic surgeon.  he examined Jack's nose and said he thought he just needed ice and a bandaid.  I was like WHAT THE BLEEP EVER, BUDDY and called the pediatrician who said we should go straight to the ER.

(We stopped home to out on dry clothes, get snacks, and jettison 2 kids.  I am really good thanks to Harry and his effusions at packing up for the ER: phone and charger, iPad and extra battery, book for me, book for the kid, granola bars, water bottles, a sweater for me and sweatshirt for him, and socks and shoes for both since ERs are gross. 5 minutes and I am ready to go and stay all day).

On the way there, I noticed that Jack was sniffling a lot because his nose was dripping a clear fluid that could have been pool water or could have been BRAIN FLUID, who's to say?

We got right in, which was awesome/scary, and we saw a radiologist and an ER doc in like 5 minutes.  They kept Jack there for observation for quite some time, but we made it home by 4:15, which was perfect because Ben had to leave for Harry's baseball practice, other baseball practice, and hockey, meaning me and the little 3 were on our own.

Final analysis: Jack is fine and maybe I should have heeded the advice of the pool doctor.  I texted Ben "Good news no stitches.  Bad news: Possible spinal fracture" and he freaked out.  I meant to say "possible SINUS fracture" but it turned out to be a hilarious good news/bad news text if you think about it.  And no fractures they don't think-- definitely no spinal ones or sinus ones.  Just a banged up face and some freaked out parents.  Phew!

Beatrix, doing what she does: 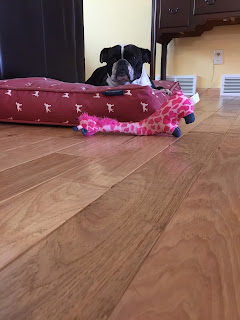 Jack checked out a cookie book from the library and wanted to make these brownie/cookies-- and I was thrilled, of course.  They were delish. 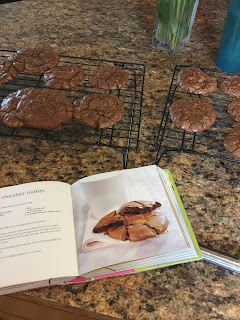 Horsing around after baseball: 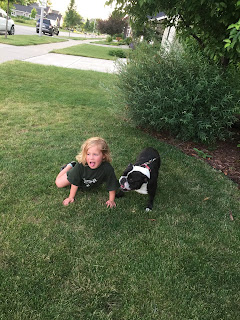 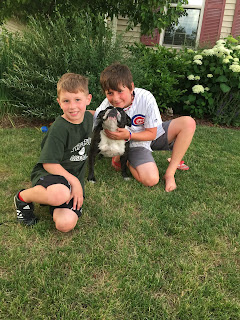 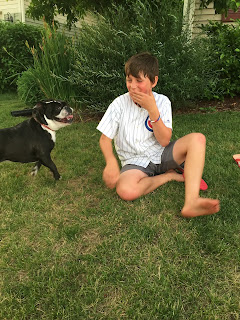 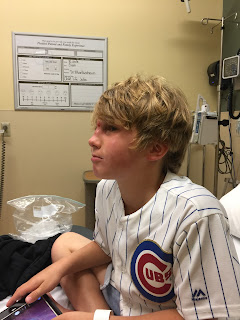 I was not my usual meal planning self on Friday night, so I made this for the kids and then let them have a slumber party in the basement. 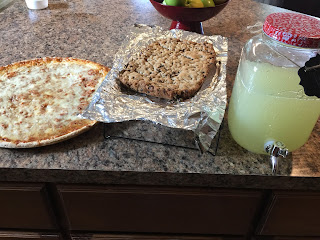 And the snow cone truck drove down our street, red-letter day FOR SURE. 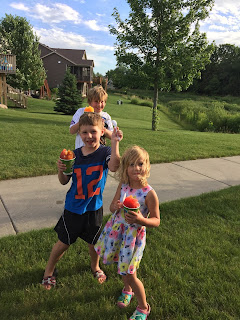 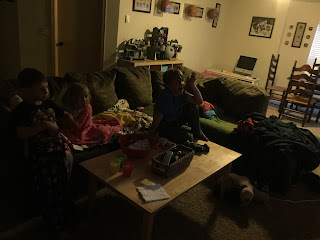 We woke Jack up and brought him into our room in case he had a head injury, and he was so confused when we were moving him that we almost took him to the ER.  The next morning, he was like HOW DID I GET HERE? and we were concerned again, but then we realized he was legit confused since he didn't go to sleep in his bed and didn't wake up where he went to sleep.  Poor kid.  It's Monday now, and his face looks almost normal.  What a lucky fall, I guess?
Posted by Sarah at 2:10 PM

This is easily one of the best blogs that i have followed online. Great material to read and know. Thanks for doing such amazing work and enriching our lives