Saturday morning, I got up early (after a week of getting up early, which was actually pretty rough) to judge a paper competition for the National History Day state tournament.  I cannot say enough good things about this whole ordeal.  The students in my group were in middle school, and they wrote amazing little papers with copious endnotes and appendices and primary sources-- so impressive.  My fellow judges were lovely oder women who were historians and teachers, and we got to interview each author for 15 minutes, which was just about the cutest thing that has ever happened in my life, and I live with 4 really cute kids.  Remind me to volunteer next year, and you should see about programs in your state, too.

But!  Before I left, Harry came in from walking the dog all fake weepy to ell us that he somehow tripped and his Under Armor sandal just up an flew into the sewer.  I think he wanted us to not be pissed off and to immediately jump on Zappos and flush another $30 down the toilet.  But then we surprised him and were just totally indifferent about the whole thing.  He did not know what to make of our reaction.  We were like well, dude, your birthday is in June.  Maybe you can get more sandals then.  **shrug**  Chipper little Jack, though, suggested they use a fishing pole to get it out, and I snapped this pic on my way to campus.  (Turns out, they needed to attach a straightened-out wire hanger to the end of Ben's hockey stick to get both the shoe AND the fishing pole, but they had a ton of fun doing this). 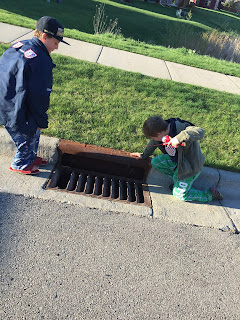 Meanwhile, I was so impressed with myself for being on time and dressed like a grown up that I took a picture of my reflection right there on the street because my vanity knows no bounds. 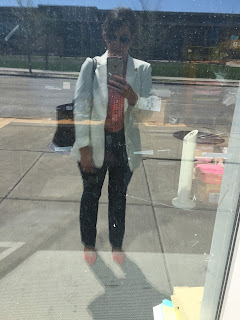 I came home to a Flinstonian platter of ribs (3 racks!) that everyone demolished, especially Harry. 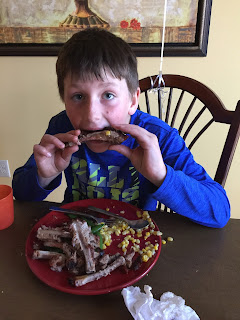 I have been nervous about Sunday for quite awhile, ever since Ben signed up to coach Dorothy and Cooper's soccer team, because their first game overlapped with Harry's first Little League game, which ben was also coaching, meaning I would have to coach soccer for half the game.  Which, seriously, is a terrible idea.  I have never even played soccer.  Luckily, a dad stepped in to help me out, and the Rockets were kicking some major ass when Ben got there, at which time, I retired to the playground with Jack and my excellent book while Harry jumped into the middle of a rowdy football game with kids he had never met before because he will never not play football.  (Also, his team lost 13-3, but Harry stole a base and got a run and an RBI). 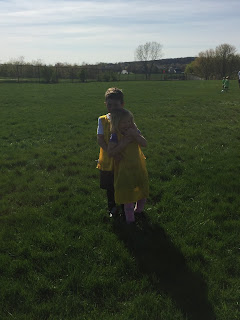 After the game, Cooper came running to the play ground brandishing a bag of Skinny Pop and a Capri Sun and screamed, "I scored a GOAL in my FIRST GAME and I got this snack FOR FREE!" 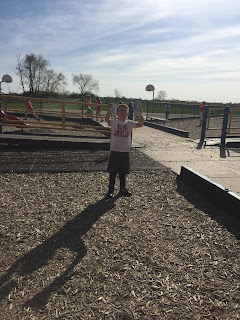 Against our better judgement, we took the kids out for dinner after the game. 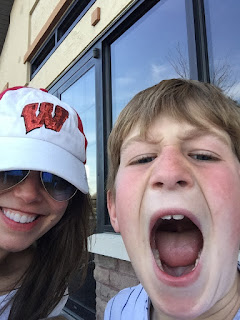 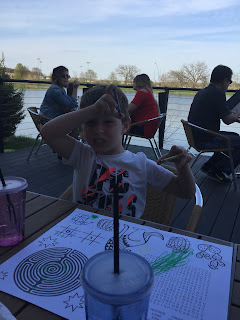 Nice story, good to read it in my spare time. But some good and meaningful stories with great lessons would be appreciated too.