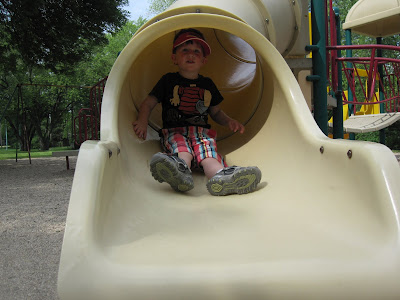 Oh, you guys, I am no longer scared of summer vacay.

I'll admit, we had a rocky start because we had to cancel our Memorial Day weekend trip to a conference in Minneapolis because Jack was under the weather-- fever, cough, terrible, terrible diaper rash. He probably would have been just fine in retrospect, but we weren't sure, and we didn't want to travel 5 hours to hang with a sick kid in an unfamiliar city. Still, we hemmed and hawed and packed anyway (even though he spiked a fever the afternoon before we were scheduled to leave), and Harry lost his shit a little because he was so excited about the hotel-- the kid loves hotels. So, yeah. A little rocky. (And he is coughing while I type this. So is Harry. Awesome sauce).

But then we did the best thing ever. We joined a pool. *Cue angels singing*

All of my childhood summers of spending all day splashing and sunning and snacking poolside came rushing back the moment we swiped our cards at the front desk and emerged from the locker room into the bright chaos of the pool deck. The boys and I played poolside for 3 hours, and it was bliss.

Now my days have structure, and unstructured days were what was freaking me the freak out:

Morning: Play at a park or at the zoo or in the yard before peak sun rays. Go to the gym. Come home for lunch and naps.
Afternoon: Snack. At 3:00, go to the pool. Have another snack. Come home at 6 to do dinner, bed, and bath.
Evening: Drink wine with husband (but not on the deck because oh my holy hell, we went out there last night, but our cocktail hour was called abruptly on account of BATS. Eeeeeeeeeew.)

Notice nowhere in this plan is sit around the house and scream at each other with the TV on. (Unless it rains. But I even have tricks up my sleeve for the rain: The library. Barnes and Noble. Cooking class. Pump it Up. Little Gym day camps (for H) Indoor swimming at the Y.)

We may mix the mornings up with some swim lessons for Harry in the late summer (we are enrolled already in early summer lessons somewhere else) and trips to some teeny little beaches in our town. And for a few weeks, I'll be spending my mornings teaching summer school, but I'll be home by 1-- plenty of time to swim the day away.

I am anxious about getting too much sun, so we are going to avoid going outside between 11-ish and 3-ish, and we're using lots of sunscreen (with lots of trepidation). I also have the kids in super long swim trunks and rash guards (which? I would like to find long-sleeved-- anyone seen them anywhere?), and I am wearing the most ridiculous large hats and sunglasses. And the dreaded mom-kini. I even bought a 1-piece for the first time in literally my entire life. I'll have a post up about my suburban makeover at AKoP soonish. My sunxiety is funny, considering I spent the first 20 years of my life tanning with baby oil and watching my skin turn the color of lattes. Now I worry about chemicals in sunscreens and watch my moles like it's my job.

Even Ben is stoked about the pool, mostly because it means I will leave him the crap alone in the tantrum filled afternoon, will feed the kids at the pool snack bar (grilled cheese! pizza! ice cream!) a couple days a week, and just generally lay off him if he needs to work late. Also, he wants to play in a tennis league and take advantage of the wifi to work from pool part of the summer. Other than that, he's not a huge fan. While the kids and I played yesterday, he drank beer and watered his grass seed and bushes. He also trimmed the grass between his hostas with scissors because the lawn guys avoid our plants altogether, which is good, but the grass around them is crazy long. Actually Ben had the best afternoon ever because this is the first summer we've lived here (and this is the 4th summer in this place) that we have realized we have a faucet outside and can actually use a hose without having to hook it up to the deep sink in the laundry room and leave the garage door and the door to our house open. We're idiots about stuff like that. Now we can use our sprinklers and baby pool. Duh. So Ben bought a hose and a hose storage thing and hose accessories and had the most fun ever watering his stuff. Whatever makes him happy, right? 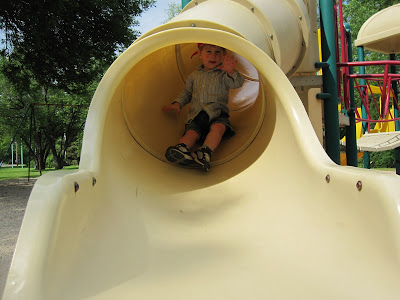 We need a plan SO BAD. I love yours. We belong to our pool and it is mere blocks away from my house. But it is almost one-hundred in the afternoon and it is literally too hot to be outside, even at the pool.

I must work on eliminating "sitting around the house yelling at each other with the TV on." That sounds like a good plan.

Ah- memories of lounging by Sunset Pool and drinking nonalcoholic strawberry daquiris (whenever my mom was feeling generous).

Hey- sounds like Jack may have Hand, Foot and Mouth Disease. It was going around Mattie's daycare. It showed up in her with a sore throat, fever, bad diaper rash, and lack of appetite. It cleared up on it's own in a few days.

HVAC Man said...
This comment has been removed by a blog administrator.
10:55 AM

I bought a great long-sleeved rash guard from Atleta online. They have all kinds of fantastic (as in cool surfer-style stuff, not obvious-mom stuff) swim suits that offer great coverage.

As soon as it WARMS UP and STOPS RAINING, we too will be living at the pool. I loved that about my summers growing up.

Coming up with a plan for your days is the most important part to staying sane at home! Seriously! Sounds like you're well on your way :) Yay for the pool!!

Long sleeve rash guard from the Baby Gap for Jack. He's been wearing it all weekend at the lake and hasn't complained about being hot yet.

Having something "scheduled" for each day is what keeps me sane since we don't do any preschool/daycare officially. Normally we only have things scheduled in the morning, but my husband also normally gets home around4 or 5, so it isn't a huge deal.

As for Rash Guard shirts, your best bet would be to look online. I think LandsEnd has some, but maybe not in Jack's size. Someone already mentioned Gap. They are out there, but surprisingly hard to find!

I want your schedule so badly it hurts. It sounds absolutely perfect. I think we picked the worst possible time to get pregnant and deliver a baby. Mid-July? Are you kidding me?????

joining a pool sounds AWESOME. Fortunately our neighbors have a membership and bring as their guests a lot. But eventually they'll be out on some hot day and we will be relegated to splashing in our tub. Should really find a pool to join ourselves....

we've got preschool summer camp 3x a week, which I think is going to save my sanity, but the pool sounds so nice!