My iPad dreams came true! I love my husband! Also my adorable children 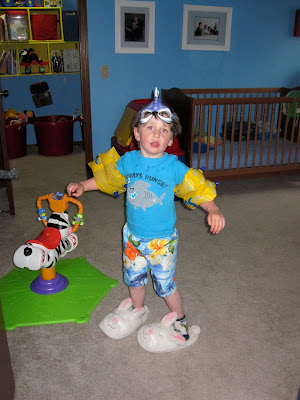 Yesterday was a scary day. The basket of shit Ben keeps on his dresser got spilled on the floor and before we knew it the kids descended on the non-child-proofed mess. We bickered for a minute about whether or not they would choke on stuff and then bam! We were fishing a wet Tylenol pill out of Jack's mouth. We decided we had to assume that he swallowed some, so Ben took him to the ER for blood tests while I took Harry to a birthday party at Chuck E Cheese.

Who would have thunk that preschooler duty at the big mouse's house would be the preferable way to spend the afternoon? Poor Ben. Poor Jack, who didn't, by the way, ingest any Tylenol. 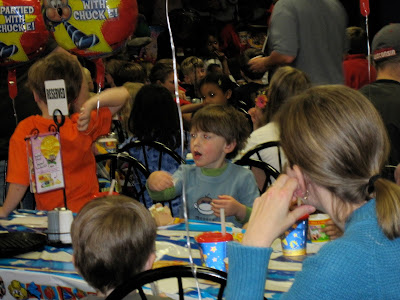 This morning Ben went out early to get donuts from my favorite Kosher bakery, and Harry gifted me my own lint brush. 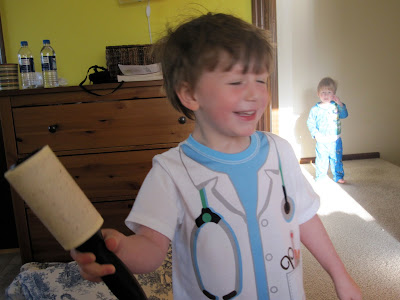 Jack hung out in bed getting bunny crumbs everywhere, and when Ben came back, I opened my gift--- 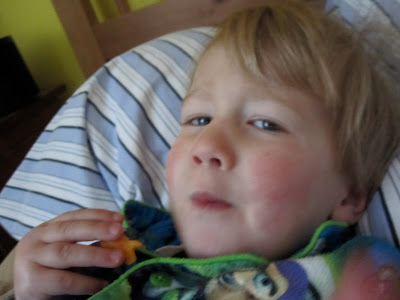 The iPad I wanted!!! I am typing this post on it right now while my students take a final exam (on Mothers Day).

It's like a big iPod but way, way, way cooler. The book app is totally awesome, and I think I will finally read more newspapers. I can also put my course readers, attendance sheets, and videos I want to show in class on it, so I think I can finally stop carrying 45 pounds of shit in my bag everyday, which is something my massage therapist has told me i need to do.* I am in the market for a skin so I can drag it to the gym and subscribe to all my magazines and download lots of trashy books. In short, awesome Mothers Day present and perfect for screwing around on the Internet when my students are writing essays for me to grade 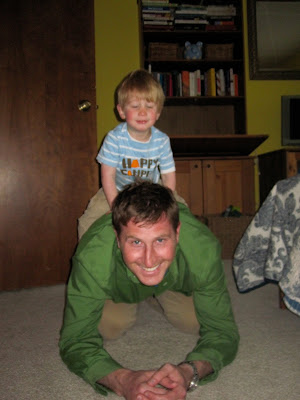 Jack colored me a card at the gym daycare yesterday, and Harry painted the hell out of Tera cotta pot in which he planted something. He also made me a cool set of stationary and a tissue paper corsage. I was really touched by his projects because he used SO much paint and glued about 15 hearts to my card. He usually does a very cursory job on his art projects, and I am so happy he put so much fat-fingered effort into these gifts.

Ben says he doesn't see the resemblance but I think it looks like he is holding himself. 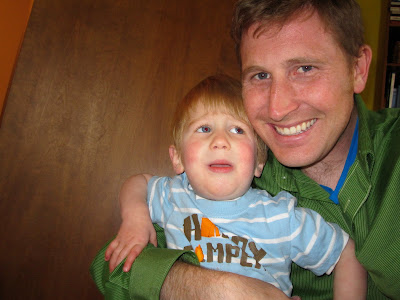 *About the massage therapist. I have been getting massages every 3 weeks, and I have been seeing the same woman. She is really young. So young that the first time I saw her, I didn't take off my bra because I felt uncomfortable. But my problem area is my left shoulder, and the bra strap got in the way. The second time, I kept my bra on again for some screwed up reason (I get lots of massages and have NEVER left my bra on before). Last time, she unhooked my bra, and I said really loudly (because I was half asleep before that second and lost the ability to control volume for a moment there) "Should I just take it off?". And she was all, "no," and it was weird. So I think I am going to switch massage therapists because I want to take my bra off and enjoy the massage (oh god that sounded so weird), and I feel like I have come too far bra-on with this woman. The problem is, she's really good. So what do I do? Take it off? Leave it on? Switch therapists? I'm feeling my shoulders tense up as my next appointment approaches, and it's supposed to be RELAXING!
Posted by Sarah at 4:11 PM

I'm getting one of otterbox cases when I get an ipad (someday). They aren't necessarily cute, but it's super sturdy stuff!

I think I need to get regular massages. The entire upper right side of my back is so screwed up, I'm thinking because I always carry the kids on the left side. I got one once and couldn't believe that nothing hurt afterward!

I say if you like her just take your bra off and don't worry about it. Really funny question, though!

So insanely jealous of the ipad!! Sounds dreamy.

Happy Mother's Day Sarah, you really are a great one--it sounds like you had a great day!

What a great Mother's Day!

I'm with Becca, I'd just take it off next time and not say anything about it. You could totally play it off like "Oh! I didn't even think that people took their bras off for a massage! Silly me!"

Thanks for the Monday morning laugh!

Massage therapists can more easily do their job (and relax your muscles) without clothing in the way. That said, most don't really care how undressed you get - just as long as you are comfortable.

I book appts for a bajillionty massage therapists at my 2nd job for a phone answering service, and people always ask about the "naked policy" - which is my name for it :-)

Me? I go full monty for massages. I'm covered the whole time, so it doesn't really matter, and I feel much more relaxed not having to worry that underthings are getting in the way! ~Kelly Jo

Dying laughing at your dilemma. Just go without and never mention it again.

So jealous - of both the regular massages and the iPad. But! I did get a massage at work the other day (one of the perks of working in big bad corporate America - on-site massage therapist!) and she talked. The ENTIRE time. Not so much for the relaxing... and you should totally just take it off and not think twice - just think of the other people they massage and realize you're not even closest to strangest!

Yours is the first review of the iPad that makes me actually want it a little bit.

And yes, Ben is totally holding a little version of himself in that picture.

Your description of your MD gifts from the kids made me all vklempt. So sweet.

Also, about the massage therapy! Take the bra off! If she's good, keep her! She is not going to think twice about it, I promise. A lot of people have to build up their trust level with someone who is treating them--totally normal!

I could totally use a massage, but then I would be totally confused about the bra thing. That, and my back is gross right now due to crazy hormones - and I don't want to subject anyone to that other than my husband. Still jealous though.