If you think being an academic means you get summers off, you are mistaken. Or maybe I'm doing it wrong.

I promise that I will never, ever, never procrastinate again.

Because I understand, Universe, that you will totally screw me over if I leave myself just enough time to finish everything on my list and not a second more.

How do I understand that?

I have put in 12 hour days at the office this week, and I am STILL NOT DONE. Also, my kids got terribly sick at the same MOMENT on Tuesday after one of those 12-hour days, a couple of beers, and LOST. We were just putting our tired legs into bed when Jack woke up with a 102 fever. Ben settled me and Jack in our bed and abandoned us (kind of smugly) for the couch. Not 20 minutes later, Harry was up screaming with an ear infection. Ben said Harry may have stayed up all night watching Cartoon Network. I don't know because I was trying to sleep in between Jack smacking me in the face and kicking me in the junk.

One trip to the pediatrician, some antibiotics for Harry and a sore throat diagnosis for Jack later, and they're okay.

Guess what time I got home last night from work.

Guess what time Jack woke up and needed to come sleep with us. (translation: lay in between us and kick and in the process wake Harry, who paced back and forth from our bed to his for an hour)

These pictures are from the other day, when sleep was something I took for granted and my to-do list looked like I could get it to-done. 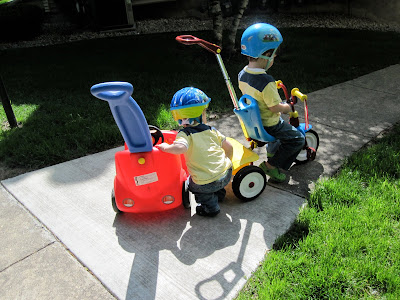 Jerky neighbor kid killed all our tulips but this one 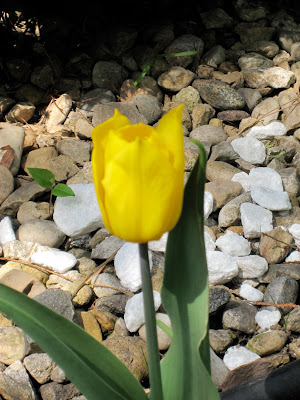 Ben put in these bushes (and after I took this pic, he planted rose bushes, big thorny ones, between them) to keep the jerky neighbor kids away 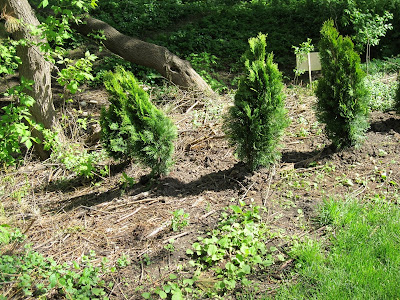 The promise of a big-boy bike for his birthday has made Harry work on pedaling. 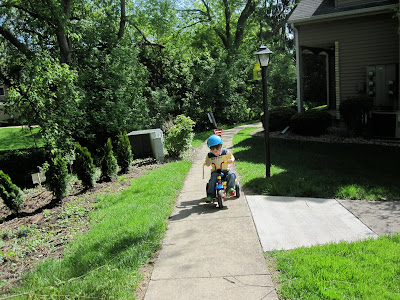 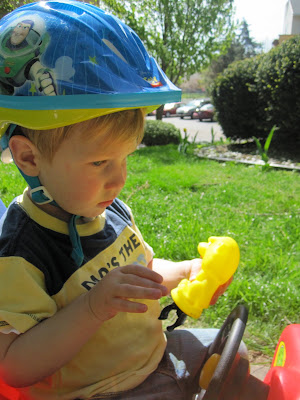 He looks cute until you have to push his bike around with that giant handle. Then? Not as cute. 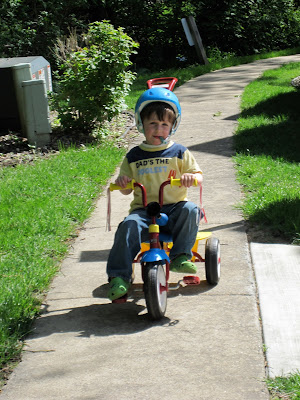 Okay. I have written 2 exams and 2 answer keys. Now I just have to grade a set of exams and research papers and have some staff meetings. And then finish prepping my class that starts on Harry's birthday. And finish writing an essay. And edit another essay. And get my fall classes in order. Just in time for staff meeting in August. What happened to summers off? I definitely stayed in school for 10 years for summers off...
Posted by Sarah at 4:00 PM

sounds overwhelming, but I have totoal faith in you and your family to get everything done well and on time...but that's just a Bomma talking because I love you.

Sarah, sounds like a miserable week! Hang in there!

omg, I'm exhausted reading this! I hope next week is better with fabulous sleep and healthy kids and a list that is to-done with minimal effort!

Really great timing, VIRUSES. It's all hit the fan for me too this week. Next time I ask if I should volunteer for something? Smack me good and hard. But I don't have nearly as much to do as you do.