I was supposed to get a massage today but I spent that time untangling my iPhone earbuds from my steering column. I'm achy.

Jack was saying cheese in this picture, which I found more adorable than when Harry first started saying cheese because Jack has been such a man of few words. He talks a lot now, though, and very clearly. He strings together phrases and sentences, and while he is not at all the talker Harry was at this age, he is well within normal range for a 2 year old. Phew! 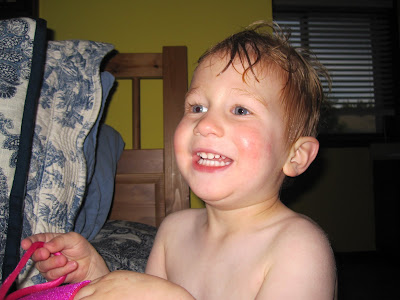 I let Harry have a piece of gum the other day for the first time because I made him run into Target with me on the way to a birthday party (so I could pick up clips for my wretched hair), and he was agitated about being late to the party. I gave him a stick of Juicy Fruit to stop up his whine hole, and he LITERALLY could not walk and chew gum at the same time. He was concentrating so hard on not swallowing it. Then I almost fell down laughing my ass off.

These pictures have nothing to do with gum, but they're cool. While Jack played completely unattended behind me, I took about fifty bajillion pictures of Harry jumping off this thing and got exactly 2 good ones: 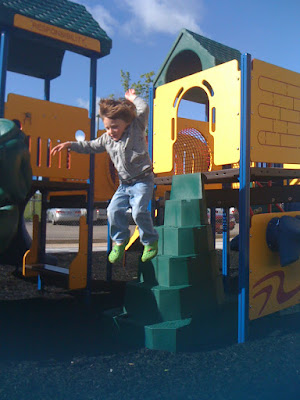 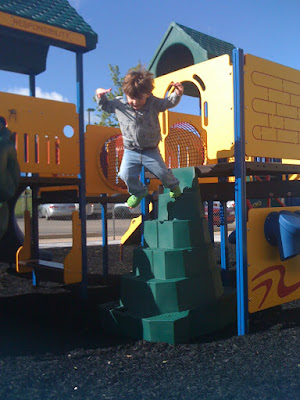 I'm trying this new thing where I don't drink caffeine except for a single cup of half caf in the morning. I bought a bunch of decaf pods for my Kuerig, and I drink them all day. Most of my love of coffee is the taste and holding a hot mug. This drastic change in caffeine consumption has had a wonderful effect on my mood and my patience level. That is to say, I am in a good mood and am patient. It's pretty nice. 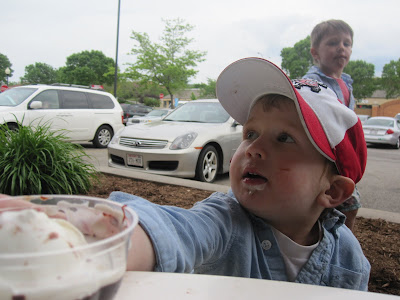 Oh my god. This kid. When did he get so big? 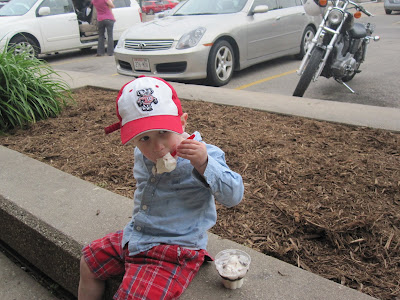 And so tidy? He spent most of the time at DQ mopping up spills with his clutch of spitty napkins 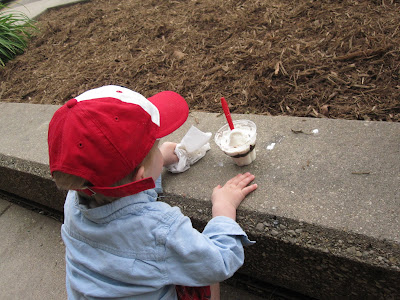 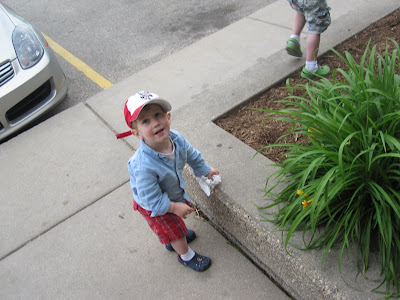 I'm done prepping my summer class! Yay! Now it's time to turn my attention to fall before our babysitter leaves town for good. Yikes! Did I mention we're not signed up for camp at all? So once my class is over and Jamie moves to Colorado, it's just me and my kids. For days on end. That patience I was just bragging about? Gonna need it.
Posted by Sarah at 8:24 PM

Haha, the gum thing is super funny. Also, I thought the ice cream pictures were of Harry. Dude.

I'm having the opposite experience with caffeine withdrawl. Namely, the other day I had to stop and reflect why I was feeling so bitchy at preschool drop off and realized it was because I stopped liking coffee several weeks ago. WTF.

I too love the gum thing. I find that lollipops and peppermints work well too!

I really should decrease my caffeine intake. If I have a mid-afternoon coffee (which I love and NEED when I'm reading a 60 page review article), I usually end up shaking. Which probably is not a good thing.

Julia cleans up her messes too. Elisabeth? Eh, not so much.

Where is she moving to in Colorado? Because I can only advise great places to visit if it's Colorado Springs. Otherwise, I'm still a tourist. :)

I respect your attempt at quitting the caffeine. It's an idea I've been playing with lately, but first I need to grow a pair and take the first step...only one Diet Coke a day with the goal being zero Diet Cokes a day.

Omg. It makes me tear up just thinking about not having it...

I agree with Becca that Jack is looking a little too much like Harry these days - when did he grow up? And way to go on getting ready for your summer class. I still have things to do for mine, and they started yesterday!