Harry faced and solved his first sartorial conundrum yesterday. He was wearing an orange shirt and a red hat, and he didn't know which flip-flops to wear-- red or orange. 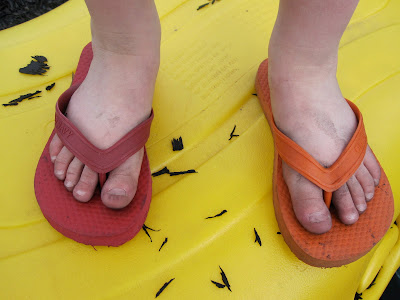 I think he made a good choice. You would not believe the ring around the tub that remained after he took a bath last night. Or maybe you would. Look at those filthy piggies.

Not only does Harry refuse to listen or follow even the most basic of directions (at least not until he has been asked at least 6 times with increasing agitation on my part and received multiple-- and totally lame and ineffectual-- threats pertaining to the demise of his toys), when he sees that I am starting to get upset and raise my voice, he says, "Waaah, waaah, waaah." (as in "here comes the wambulance"). Totally deadpan. It makes me see red. Red. So, I downloaded a bunch of flashes and lenses for the Hipstamatic app, thinking maybe I could capture his lippiness and my feelings about it. This is close but not quite. I'll try again. (Hey, it's better than giving in to my desire to throttle him, right?) 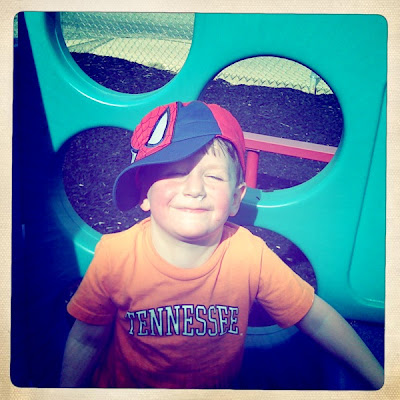 We had another preschool birthday party yesterday, and Jack was so, so, so happy to be invited. When we finally got there 25 minutes late, he clapped and said "Oooooh," as we approached the party. 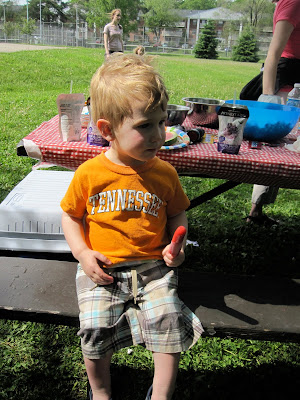 We had a grumpy time of it getting ready to go, mainly because I was running about, oh, 25 minutes behind schedule and Jack was too excited to nap, so he fell apart over every little tiny injustice-- and Harry made sure that justice was scarce. They boys acted like I was torturing them when I put the gate up outside their door and asked them to please play in there with the door open while I folded a few loads of laundry and threw a giant hat over my terrible hair. Yes-- it's really hard to be in a huge room with 400,000 toys for 20 minutes. Someone should call the authorities. And I thought someone might-- there was so much brother-on-brother violence and calls of "Mommy! I want to come out!" and some not-so-cooing replies from me. Picture. Perfect.
At the party, Harry was offered a popsicle or a rice krispie treat. He chose both. That's my kid. 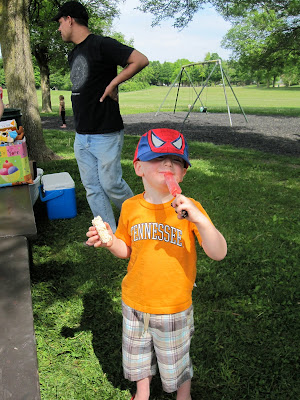 After the party, Harry and Jack were covered with popsicle and playground filth, but I still had an hour to kill before their much anticipated breakfast-for-dinner at a greasy diner, and I ws reluctant to take their grimy selves back home. The solution? Another playground! 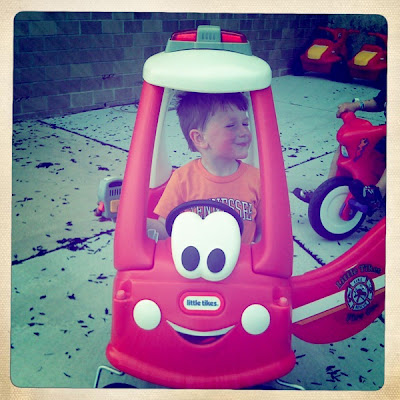 We lucked out and ran into Harry's old friend from preschool last year, and the boys played for a happy, super hero-filled hour 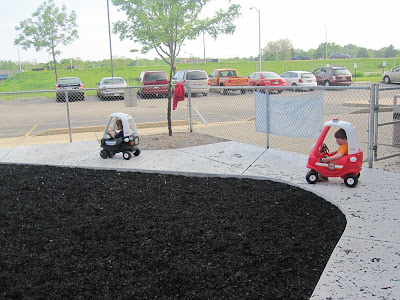 No-nap Jack was frantically tired, but he held it together kind of. 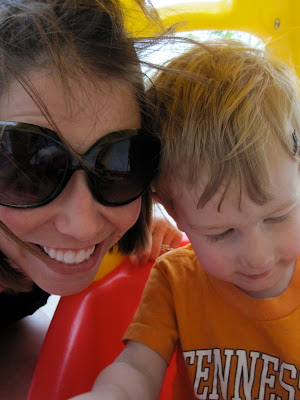 Then we ate breakfast for dinner and both boys were asleep by 7:15. Aaaaaaaaaaah.
Posted by Sarah at 7:07 AM

The selective hearing makes me INSANE. I was a giant jerk at church this morning because I had to walk them up this long breezeway to their Sunday School rooms (which is also where Charlie's school is, so this has been building for a while) and they were darting all over the place, knocking little old ladies over, and pretty much ignoring me. Then I not-so-gently grabbed Wes and said "You come with ME" right in front of the pastor's son. It was a classy moment.

Why do they always want us when we need to do a million other things? I know this picture all too well. Sorry Sarah, but Harry looks to darn cute in those pics to be snarky!

ILucky they're cute! It could save their lives someday! That was what I frequently thought when the kids were little

Oh the not listening, the not wanting to do anything... We are so there with you on that one. It is a struggle to get AJU5 out of the house these days - or to get her dressed or anything like that.

Looks like you still had a fun day though!