Update: I just saved my MacBook from certain death in Kentucky

The Geek Squad sucks, and the Genius Bar rules.

I took my precious little computer whom I love very much even though I have been totally neglecting it for my shiny new iPad to Best Buy because that's where I purchased it and a $300 protection plan in October of 2007. First of all, the place was a ZOO. Second, the guy had dirty hands, and he touched my computer ALL OVER. Third, he ripped off the sticker that was covering the hole in my case and turned the computer roughly on its side. He tried to open the bottom with a quarter instead of a nifty little key, and he told me my computer was going to KENTUCKY for 3 WEEKS to be fixed and that I should probably let them back up all my data before they shipped it for $150. I left my computer (upside down) on the counter to go to customer service and have them print my warranty. They couldn't find it. They acted like it was my fault they couldn't find it. Then they found it, but they were unable to print a receipt because the system was down. I went back to the Geek Squad where a woman's busted down Toshiba was sitting ON TOP OF MY COMPUTER. The Geek yelled at me for not bringing the right receipt and then booted up a register next to him to print it his damn self (why was that not an option before he sent me to customer service?) I called Ben and told him I was just going to buy a new computer. he was like, "What the F ever. I am in a meeting. Do what you need to do. But maybe you should go to the frigging Apple store first." I was all, but I'll have to PAY for repairs there, and he was like, "Okay. So that new Macbook Pro you wanted 3 minutes ago was going to be free?" I was like yeah, pretty much, I was just going to charge it.

Then he hung up.

You know what, I said to the Geek. I am just going to use this one until it dies and get another one. I can't be away from it for 3 weeks. I grabbed my computer and ran. Across the mall parking lot to the Apple store.

In 15 minutes, the Genius behind the bar had fixed my broken optical drive, diagnosed my hard drive problem, and made me an appointment tomorrow morning for a new case and a new hard drive-- both totally free. And my computer will be ready in an hour. I could have gotten it fixed right away, but I wanted to try to salvage all the pictures I took in February, March, and April, which are the only things not backed up. (and to make sure I have my dissertation because zOMG that would be JUST LIKE ME)

In short, Apple is awesome.

Here's an iPhone pic of Jack taken one year ago today: 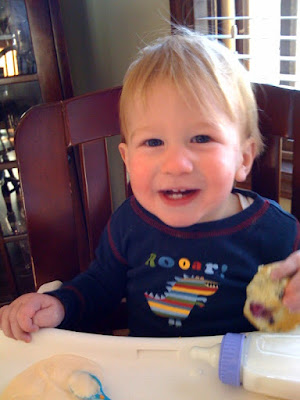 I love the Apple Store. Got to take mine in SOON! (Also for a busted optical drive, an epidemic you think?) Glad to hear they're hooking you up proper. Best Buy is useless.

The only reason we ever go to Best Buy is to "window" shop for items we will purchase online. Luckily, I have my one "personal" IT guy at home although we refuse to drink the Apple kool-aid.

Glad they were able to fix it for you!

OMG Best Buy assholes!! Glad you got fixed up. Love the phone convo with Ben. Cracked me up!

Glad you got your computer all fixed up! Just one more point for getting an Apple when my computer finally kicks it. E-mail your dissertation to yourself, right now. My computer crashed a few months ago, at the repair shop, and the guy had backed up the pics but no documents. Didn't even have a hard copy. Talk about freaking out.

Hooray for the Genius Bar (and what the hell, Best Buy customer service? or lack of...)

OMG you are so lucky! Also dying about the convo with Ben because we always have convos like that.

1. I didn't have a meeting. I have never used that excuse before. It's only to be used in extreme (I CAN"T TAKE IT) emergency's - much like this one.

2. Sarah left out the fact that she called me at least 4 times at best buy - every time she was directed to a different sales associate I got a phone call.

The Genius bar IS great. They also do excellent work for water damage on laptops. You know, in case your entire water bottle spills all over your laptop on the day of your defense. (Thankfully that kind of thing usually happens AFTER the defense, but still.)

Apple just makes me happy. I'm so glad they could fix it!