Dude, you guys, cows are stinky 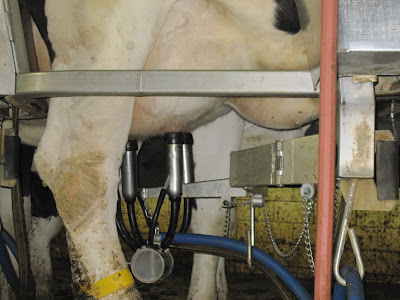 Dairy farms are weird. In one barn are stalls and stalls and shit-splattered stalls of baby calves-- some less than 24-hours old-- and in another barn are their mothers, standing as still as their swollen, ballooning udders will allow. Farmers feed the calves with outsize baby bottles, and cows are hooked up to giant (shit-splattered) pumps. Luckily I didn't have to ponder the irony of all those baby cows fed artificially while their mothers' milk is shipped off to feed human babies artificially because all the milk on this farm becomes mozzarella cheese. Mmmmm, cheese.

I have never considered myself an animal rights activist by an means (I even like lamb! and veal! and I'm sure I would dig other soft, fat little baby animals. oh! and foie gras is delish, screw the geese!), but the farm tour I took with Harry's class yesterday made me rethink our relationship to animals. When the farmer told the kids about things like tagging the cows with giant "earrings" and cauterizing their horns with something "that looks like a big cigarette lighter," the children were horrified, and the farmer explained that ultimately, these practices-- like immediately separating moms and babies-- were best for the animals. Really, though, she meant that they were best for the farm, for the industry, for us. 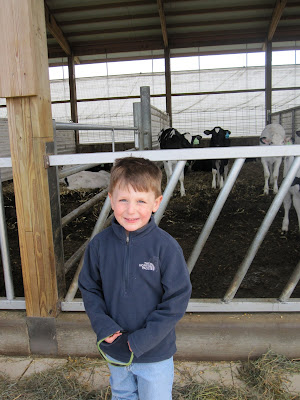 At snack time in the farmhands' lunchroom, Harry ate 5 pieces of string cheese. 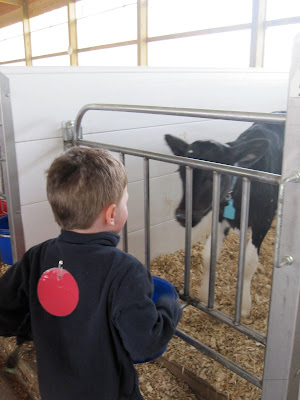 The cow in the above picture is 3 days old and pretty wobbly. 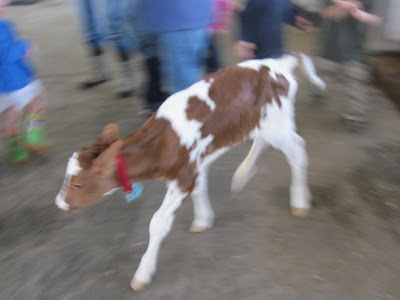 This little calf was born yesterday 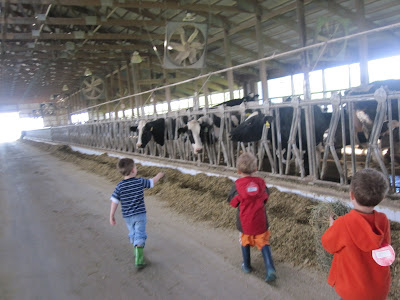 Harry was leading these little boys on a path of mischief that ended with him falling in a slimy trough of cow shit run-off. COW SHIT. He fell in it. Before the field trip, I swore that if either of us encountered cow shit, I was calling a taxi to take us home. Instead, I rolled up his pants-leg and tried not to stand down wind. I almost puked in my mouth in the milking barn, when Harry kept resting his head against the shit-splattered side of the raised milking platform. Why was everything covered in shit? WHYYYYYYYYYYY? 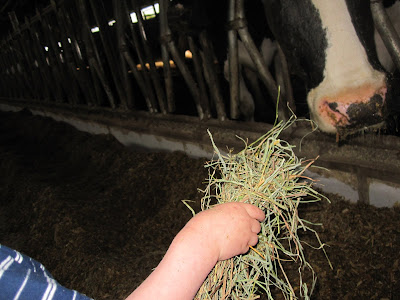 Adorably, Harry was scared of the cows' soft, fat tongues, and he kept dropping his hay all over the (shit-splattered) barn floor. Then I would say "Heeeeeey," and no one would laugh. This happened at least 16 times.

According to family legend, when I was a toddler and preschooler, the only way I could deal with the stench of a petting zoo was to bravely clutch a Chanel No.5-soaked tissue to my nose as I waded through the goats and pigs and chickens. Clearly, I was a natural choice to chaperon a cow field trip.

I went to my office in the afternoon and stayed until after the kids were in bed because I am still not done with my summer class (and may not be even after today). Also because I suck as a person and missed the cuteness that is tee-ball. 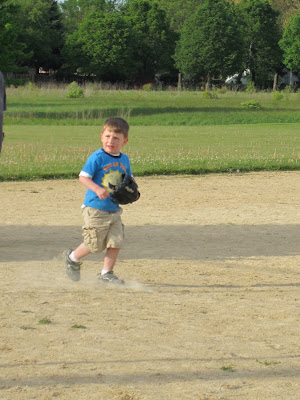 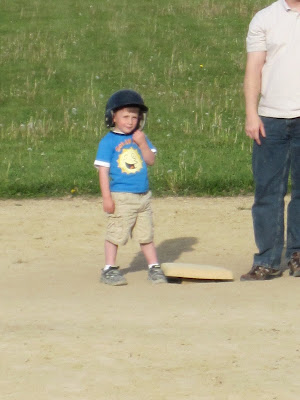 When I saw this picture of Harry playing in the dirt, Ben told me that the coach said Harry needs to be allowed to get dirtier, so that the dirt won't fascinate him as much. Whatever, I told Ben. I bet all the kids were playing in the dirt. Look at the next picture, he told me. 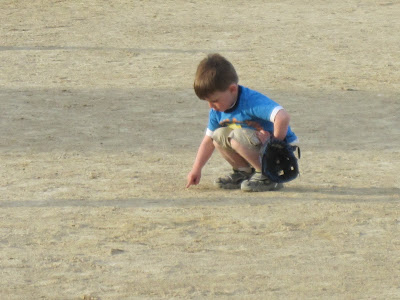 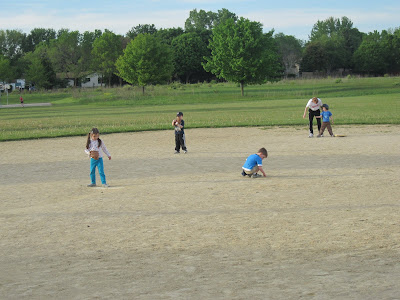 I still think he's playing in the dirt because he is 3 turning 4 and all the other kids are 5 turning 6 (Harry is on the very young end of the 3-5 spectrum on this team), not because he has a fastidious mother. Also, tee-ball coach, he rolled in cow shit yesterday-- is that not dirty enough for you?
Posted by Sarah at 6:17 AM

Oh gross cow shit!! I can only imagine the smell. Actually, I've been to a dairy farm so I don't have to imagine.

Love the t-ball pics. I think you're right about the age thing. Charlie was a total wreck in soccer and I'm certain it's because of his age. Because it's a year later and now he doesn't act like a total sociopath around other children.

I'm proud of you bearing up through such an ordeal..I remember the times with the Chanel-soaked kleenex clearly..and Tball is just the beginning..you know hour Uncles played softball into their 40s...good luck with little boys..Bomma

No worries, my kids are the too clean ones too! My daughter can point out the tiniest speck of dirt on ANYTHING and then says, 'can you get it out in the laundry?'

OMG, as gross as it is, you should maybe be glad that you had Harry and not my Jack when he fell in the shit. Jack will seriously scream his fool head off if he even spills water on himself - falling in something like that would have demanded a cab ride home to change clothes.

Oh and also, I recommend my method of dealing with shit splatter situations (not that I've been in one really) which would be to constantly tell myself that it's just MUD everywhere. May or may not be true, but it eases the squirming a bit.

Having grown up in farm country and spending lots of time at friends dairy farms, I had a feeling you would encounter lots of cow shit . . . I'm still not sure if I should have graphically warned you, or if it would have scared you off . . .

When it's Jack's turn to go to the farm, send Ben.

oh, wow. I don't think I could do the farm trip. I am throwing up in my mouth just thinking of it. You are a brave, brave soul.

and Ethan was always fascinated by dirt...though I'm not helping your cause because I hardly allowed him outside let alone near dirt. lol

I think you might have just made me a vegetarian! gross gross gross! The cow shit, the separating the babies and mamas, all of it. Gross!

I LOVE that you carted around a Chanel-soaked kleenex to be prepared for stink. love that!

I love this post Sarah, for oh so many reasons! Hilarity!

I have no problems with dirt, but yeah, I don't think I want to be near that much stink! Luckily the in-laws got rid of all of their cows!

Cute picks of the t-ball!

Every time we visit my in-laws, my MIL drags us to a damn dairy farm. I gag the entire time. The summer I was pregnant, we all went to the state fair and I barfed in the livestock pen. The stench really is unbelievable, huh?

I think ALL little boys that age are fascinated with dirt, no matter how dirty they are "allowed" to get. My son's bath water is so full of bits and pieces of crap that it looks like a marinade, so he's getting plenty dirty, yet he still attacks dirt mounds with gusto every time he sees them. Harry's concentration will get better--he's a wee one with a tiny attention span! As long as he's having fun, that's what matters, right?

Now I want to be Vegan because it's all the dairy consumption that makes them separate moms and calves.

Also, first picture made me think of a breastpump. That is all.